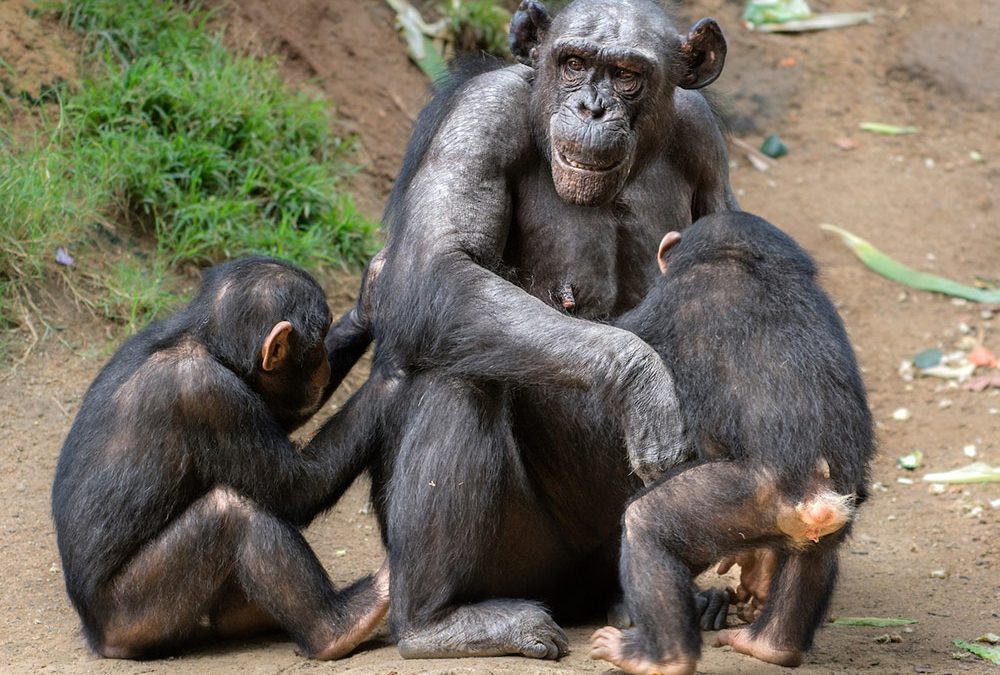 Pandora was an excellent parent to multiple generations of offspring. Photo by Jamie Pham Though chimpanzee societies are patriarchal, dominant females like Pandora can direct the social fabric of the group. Photo by Bruce Gelvin The connections we form with animals are special. They may differ from the bonds that develop with other humans, but they can affect us and enrich our lives just as deeply. The loss on November 29 of Pandora, 50-year-old matriarch of the L.A. Zoo’s chimpanzee troop, was felt powerfully by her simian and human family.

“In a male-dominated society, she was highly influential and helped maintain the social fabric of the group.”

“Pandora was remarkable—an icon,” comments Curator of Mammals Candace Sclimenti, who began her Zoo career 20 years ago as an animal care volunteer with the chimps. “She was fierce and refused to back down in a conflict, especially when it came to her kids. But at the same time she was a gentle, loving mother who raised confident, strong offspring. Actually, she was the ultimate feminist. In a male-dominated society, she was highly influential and helped maintain the social fabric of the group. When we would introduce a new chimp, it was always important that she accept the newcomer, because her opinion would prevail. So in that sense, she really was the alpha chimp.”

Pandora was already displaying her considerable influence within the troop at the age of 19 in 1985, when then seven-year-old Judeo arrived from the Cheyenne Mountain Zoo in Colorado Springs, Colorado. Judeo was given several days to settle in to his new surroundings and keepers. Then, as now, integrating a new individual is a process that takes place gradually and methodically. The first introduction was critical. Fortunately, Pandora took an immediate liking to the new member of the troop, who would go on to father two offspring with her. This bond proved very helpful to Judeo when the subsequent introduction of the then-30-year-old Bonnie brought on some antagonistic encounters. Pandora made it clear that Judeo would be accepted into the group. Before long, he was residing in relative harmony with all six females.

“She was strong, but she could also be goofy and fun—she would sometimes spin in circles while waiting to shift to the exhibit outside.”

Animal Keeper Valentina Renzetti notes that Pandora also had a propensity for light-heartedness that appealed to humans and chimps. “She was strong, but she could also be goofy and fun—she would sometimes spin in circles while waiting to shift to the exhibit outside. It was delightful to work with her.”

Pandora was born on March 5, 1967 at the Zoo during its first year at the current location. In her lifetime, she produced seven offspring, three of whom are still part of the L.A. Zoo troop: Gracie (born in 1987), Regina (born in 1983), and Jerrard (born in 1990), who eventually became the alpha male of the troop.

Gracie’s birth was a landmark event: She was the first second-generation chimp born at the Zoo to parents who had also been born in human care. In 1990, her sister Regina gave birth to Yoshi, and Yoshi’s baby Uki was born in March 2013—making four generations of chimps living together.

“Pandora’s spirit will live on in her children and their children,” Sclimenti says. “Gracie has a lot of her mom’s indomitable spirit. Sometimes I would be at the exhibit and I’d see Gracie and do a double take because at first I thought, ‘Is that Pandora?’ She looks so much like her mother at the same age. And Jerrard, though the demands of being an alpha male changed him over the years, was so gentle with her as her condition weakened.”

“Pandora is one of the strongest females I have ever known of any species.”

Animal Keeper Megan Fox echoes Sclimenti’s insight. “Pandora is one of the strongest females I have ever known of any species. It’s an honor to have known her for 20 years and a privilege to watch her family grow, with daughters and a granddaughter having kids of their own. There will only ever be one Pandora—she will always have a place in my heart and I will always love and respect her as the special soul she was.”

Animal Keeper Nancy Bunn describes Pandora as a character with “personality-plus. She projected strength of character that was admirable, and both chimpanzees and keepers knew she was the boss. I will forever be grateful to have known such an amazing, wonderful animal. I will miss her pant-hoots, her insisting on more treats, and the way she playfully tickled her grandchildren.”

As with humans, each chimpanzee is an individual and each grieves in his or her own way. Sclimenti explains that the expressions of grief can range from quiet and internal to wailing and spitting. But each chimp needs the time to process the loss, and studies have shown that allowing these grieving periods makes the death of a troop member an easier transition for the group. When it was clear that Pandora’s condition was near the end, rather than bring her to the Zoo’s Health Center, she was made comfortable in an off-exhibit area with her family. They all seemed to be aware that she would soon be gone.

“I learned much from her, professionally and personally. She was one of the chimps who readily accepted me as part of the troop.”

“Pandora was such a prevailing force in the troop that it’s hard to imagine her not being here. She touched so many lives—both chimp and human,” Sclimenti says. “I learned much from her, professionally and personally. She was one of the chimps who readily accepted me as part of the troop. Losing a friend is never easy. I am so very grateful for the time I’ve had with her. Being on the ape team remains a cherished period in my career—to be a part of the chimp staff and work with them and with her.”

Though it’s no easier for keeper Renzetti to bid Pandora farewell, seeing the elder chimp’s influence on the troop’s new generation makes it less final.

“She was a strong female role model for everybody from the very beginning,” she observes, “She passed that along to Zoe, who is very socially aware of everyone. Pandora was also the one to bring in any random objects that found their way into the exhibit, and that’s another habit she has passed along. Jean is the one who does that the most for us now. It’s a wonderful thing to see. Pandora’s legacy will live on for both her descendants and for those of us who were fortunate to know her.” 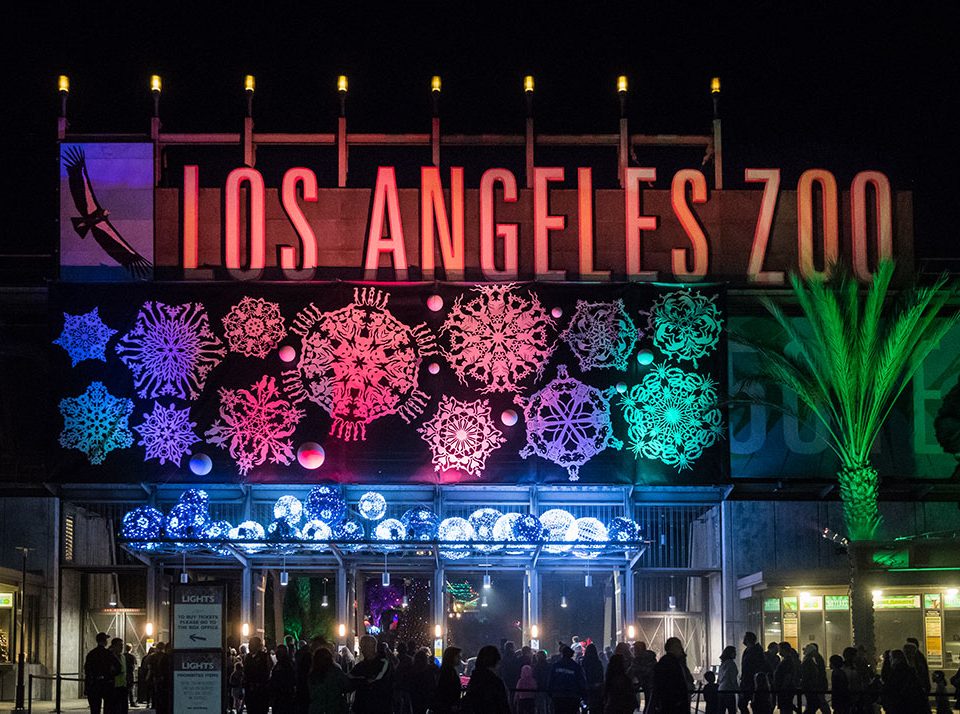 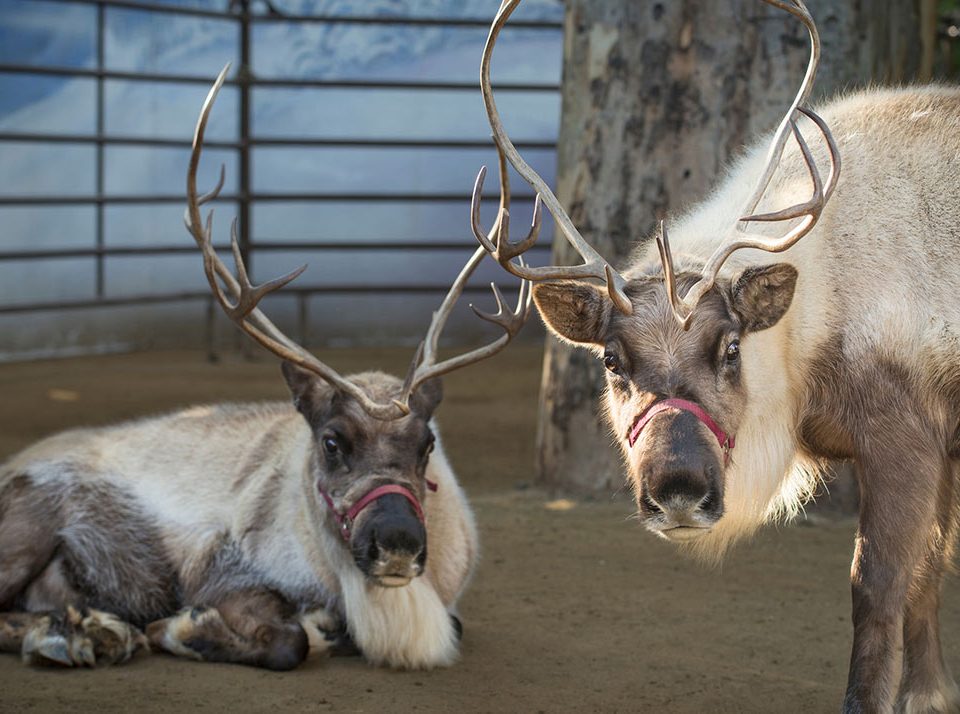 Reindeer at the L.A. Zoo Photo by Jamie Pham 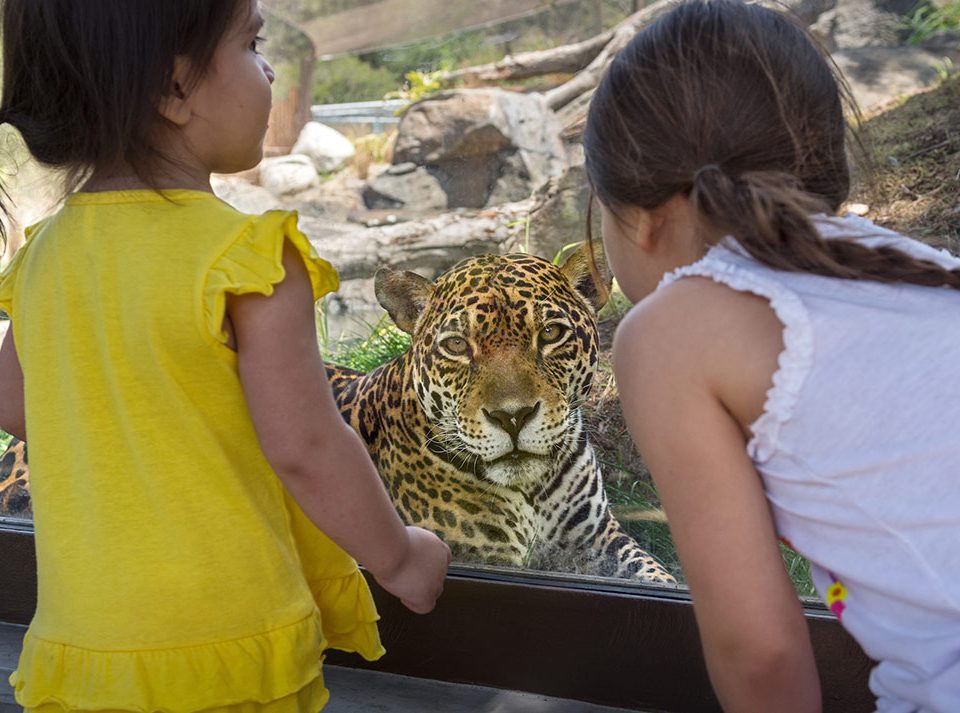 Unless we act, jaguars are at risk of extinction in the next generation’s lifetime. Join us in saving them by making a donation today. Photo by Jamie Pham