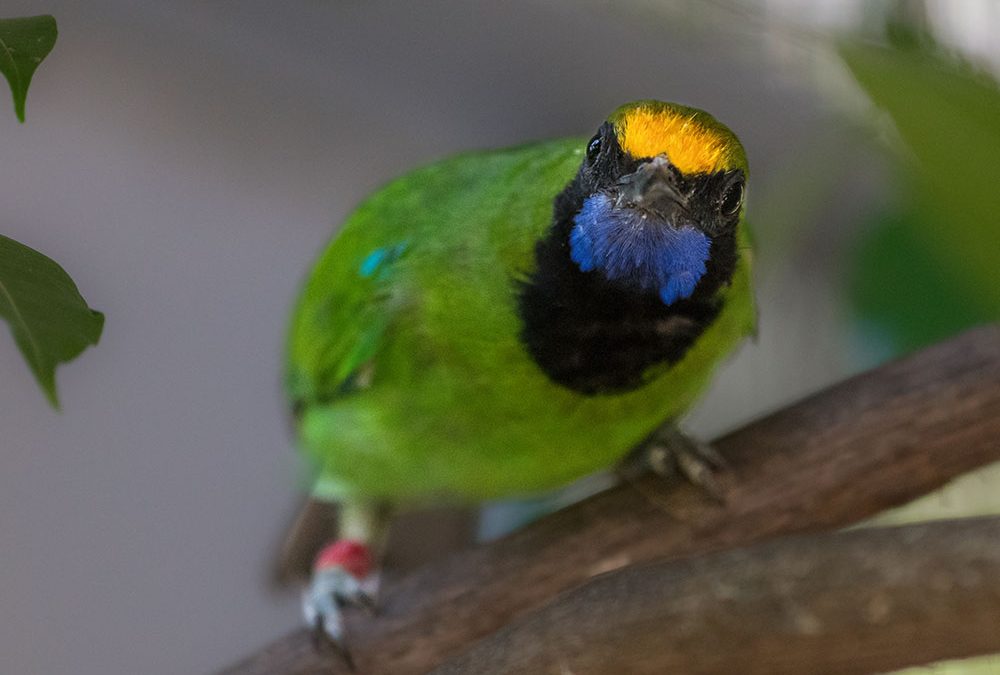 Bali mynahs are sensitive to noise and activity so they live in the off-exhibit Avian Conservatin Center (ACC). Photo by Jamie Pham A second confiscation later in the year brought this elegant parrot to the the Zoo. Photo by Jamie Pham

The tiny gold-fronted leaf bird is a flash of green, yellow, and blue among the leaves of the temporary home he shares with an elegant parrot in the Winnick Family Children’s Zoo. He twitters and cocks his head to one side, hops to Animal Keeper Lori Rogalski’s outstretched hand to snap up the mealworm snack she offers, and then flits back into the branches.

It’s easy to see the appeal of keeping a bird like this as a pet. In parts of Southeast Asia, they are status symbols, and increasing affluence in this part of the world has caused an escalation of songbirds being taken from the wild at unsustainable levels. The forests are growing silent and many species that have not even been studied by scientists are plunging toward extinction.

In parts of Southeast Asia, they are status symbols, and increasing affluence in this part of the world has caused an escalation of songbirds being taken from the wild at unsustainable levels.

On October 16, a man arrested in May for smuggling 93 songbirds into the country was sentenced to six months’ home detention in addition to 12 months’ imprisonment, for a total of 18 months. He will also pay a $5,000 fine and serve three years of supervised release. All but eight of the birds he attempted to smuggle died. A surviving Javan mynah eventualy passed away at the Zoo despite our veterinary staff’s best efforts to nurse him back to health. The rest of the survivors now make their home at the Zoo.

Two male red-billed blue magpies are now in the former roadrunner exhibit in the Children’s Zoo. There is an Association of Zoos and Aquariums (AZA) Species Survival Plan for these birds, and Curator of Birds Mike Maxcy is working to bring in some females from Europe to pair with the males. The yellow-breasted magpie (also known as the Indochinese green magpie) along with the black-collared starling and golden-crested mynah can be found in the Australasia aviary across from the Tom Mankiewicz Conservation Carousel.

The L.A. Zoo has worked with Bali mynahs for some time, and Avian Conservation Center (ACC) Keeper Lori Rogalski spent time in Bali working with a breeding program there in order to gain management insights for the pair at the Zoo. The ACC is an off-exhibit facility where birds that need a little more quiet and privacy for nesting live. This month, the AZA studbook keeper for this species will begin searching for a male to pair with the rescued Bali mynah.

“I talked with the SSP coordinator in the hope that they can send us a mate,” explains Mike Maxcy. “Genetics-wise, I’d love to have two breeding pair in the ACC. We’ve got one in there now. That bird is interesting because it had a sealed band on it, which means it was captive-bred, probably by a breeder who was selling them for the pet trade, but it was still illegally imported. There was a name on the band and some numbers, so I sent that to U.S Fish & Wildlife and maybe that will help with their investigation.”

Maxcy is in the process of finding mates for the recoperating golden-crested mynah who keepers call Luna, as well as the black-collared starling, and the gold-fronted leafbird.

“She even began vocalizing again and she sounds like R2D2. She is still a little scared of people but has improved so much.”

Luna (who now lives in the aviaries across from the Tom Mankiewicz Conservation Carousel) took some time to recover from the terrible experience of being smuggled. After a stay at the Health Center, she was moved to the ACC, where she was placed in an aviary with gold-fronted leaf bird Tomo, who had already settled in nicely and had a calming influence on her. “Her tail grew back and she started playing with Tomo,” Animal Keeper Lori Rogalski reports. “She even began vocalizing again and she sounds like R2D2. She is still a little scared of people but has improved so much.”

“For the time being, the gold-fronted leaf bird will stay at Winnick and maybe a mate will come along,” says Maxcy. “Two others were confiscated earlier in the year and San Diego Zoo was able to get both of those—but they’re both males because the males are better singers and that’s why they are captured more often. By sharing these birds and their plight with our guests, we hope to increase awareness about the problem of the pet trade. Hopefully the message that these birds must not be taken from the wild can also be learned and shared.”

Learn more about the residents of our hillside aviary near the Carousel at guided “Bird Walks” on Saturdays and Sundays at 2 p.m.

GLAZA members, be sure to reserve your spot on the February 17 Great Backyard Bird Count Bird Walk to learn more about our local bird species from our knowledgeable docents. 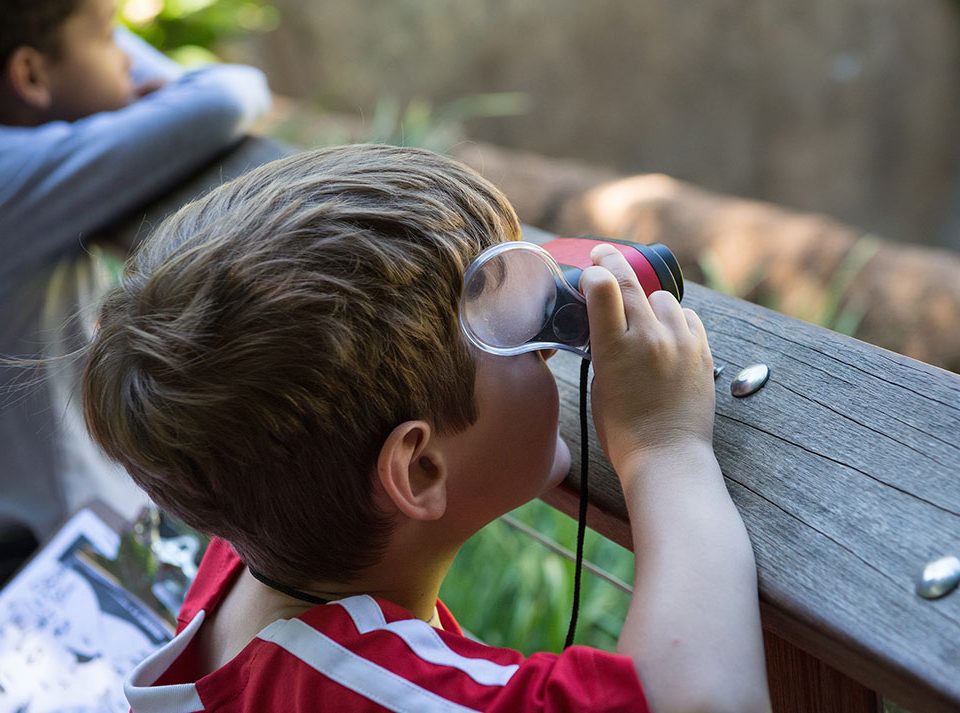 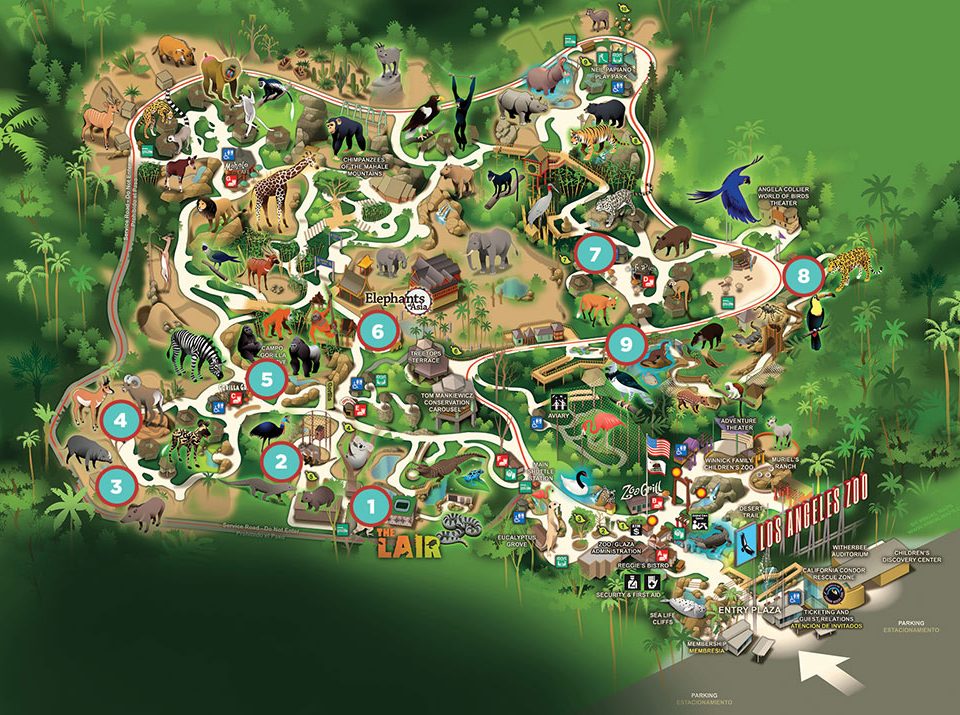