New in the Zoo: A Bounty of Egg-citing Additions

Beyond Honey Bees: A Closer Look at Other Power Pollinators 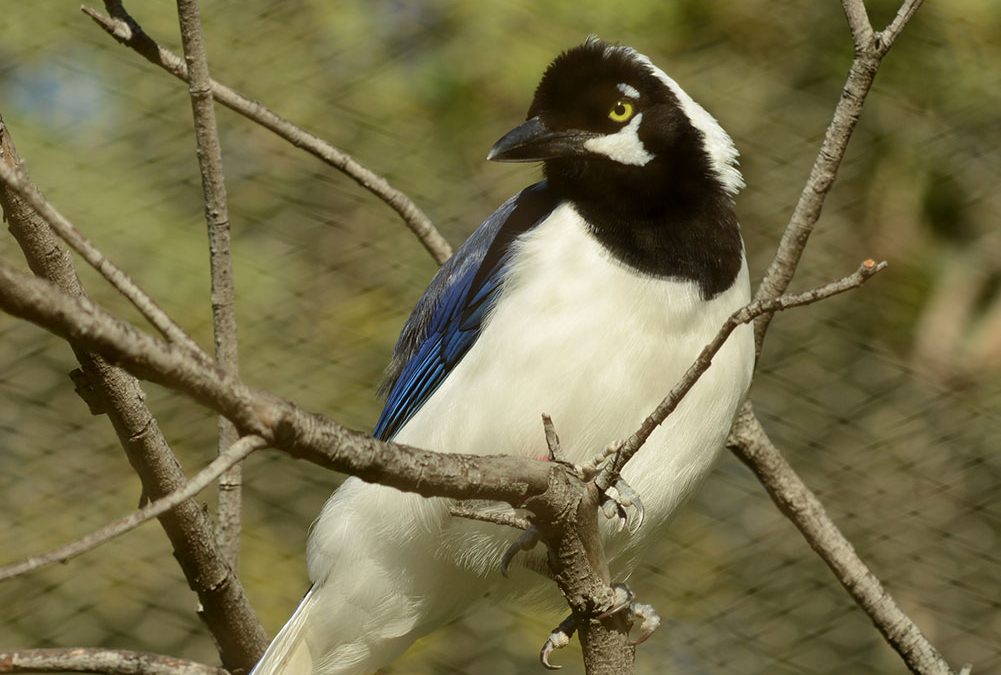 White-tailed jays are corvids—they belong to the same family as our local scrub jays, the Steller's jays that you might see up in the mountains, crows, and ravens. Photo by Tad Motoyama

The New Year opened with the hatching of two baby South American bushmasters. The bushmaster is the largest venomous snake in the New World, and few facilities are breeding these shy animals. When these little snakes are old enough, they will find homes in European zoos. Native to the tropical moist forests of Central and South America, this is the largest venomous snake in the Western hemisphere with some specimens known to reach nine feet in length. Bushmasters are threatened in the wild by habitat loss and fragmentation. The bushmaster genus, Lachesis, is named for one of the three Fates in Greek mythology. Clotho would spin a person’s life line and Lachesis would measure it out. Atropos—namesake of deadly nightshade’s genus (Atropa) and the narcotic atropine, which is derived from it—would cut the thread of life. 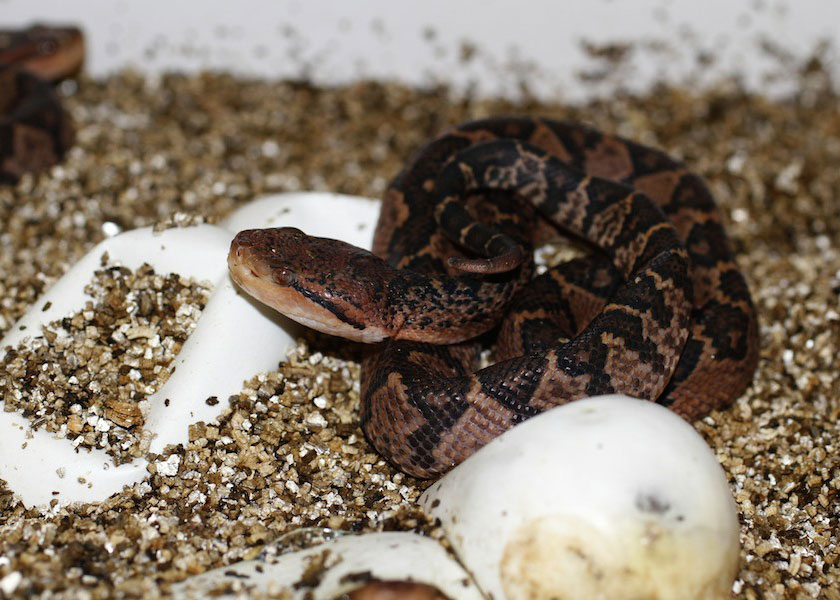 The first babies of 2019 were a pair of bushmasters. Since the Zoo first acquired this species in 2008, 26 have hatched here! Photo by Ian Recchio

The other New Year babies were six white rock doves, part of the World of Birds Show flock that closes the presentation. The birds in this flock are a white color form of the familiar pigeons that are denizens of most cities. 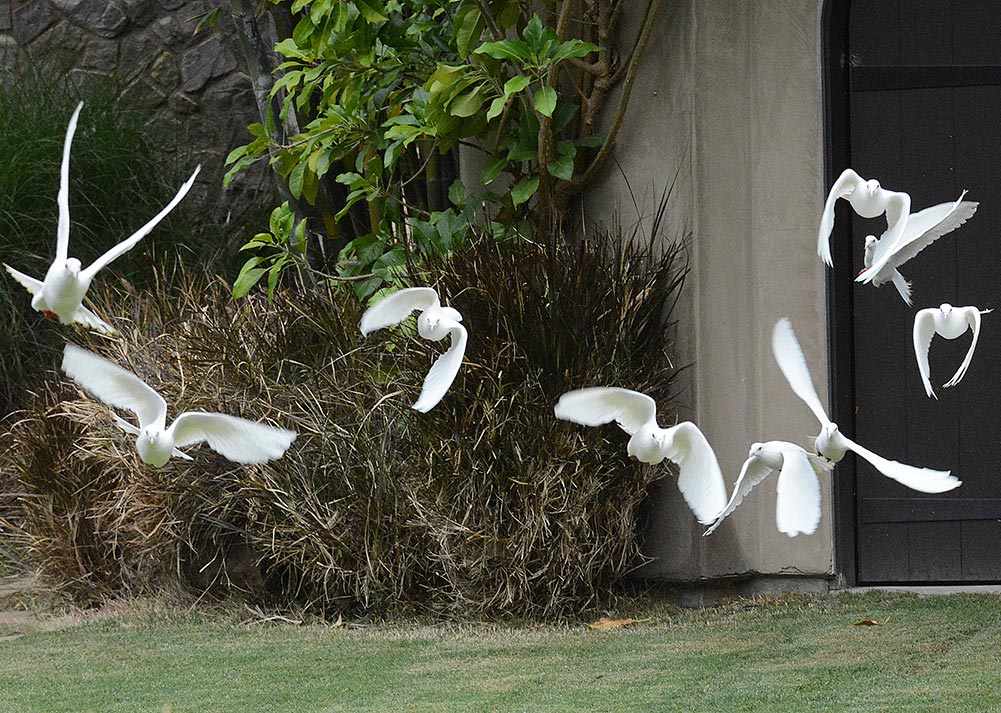 Rock doves, generally known as pigeons, are so common that they often go completely unnoticed by humans and yet they have played many important roles in different cultures around the world. Native to Europe, North Africa, and India, they were first domesticated more than 5,000 years ago—second only to chickens. Clay tablets from Mesopotamia (present day Iraq) and Egyptian hieroglyphs depict people and domestic pigeons. 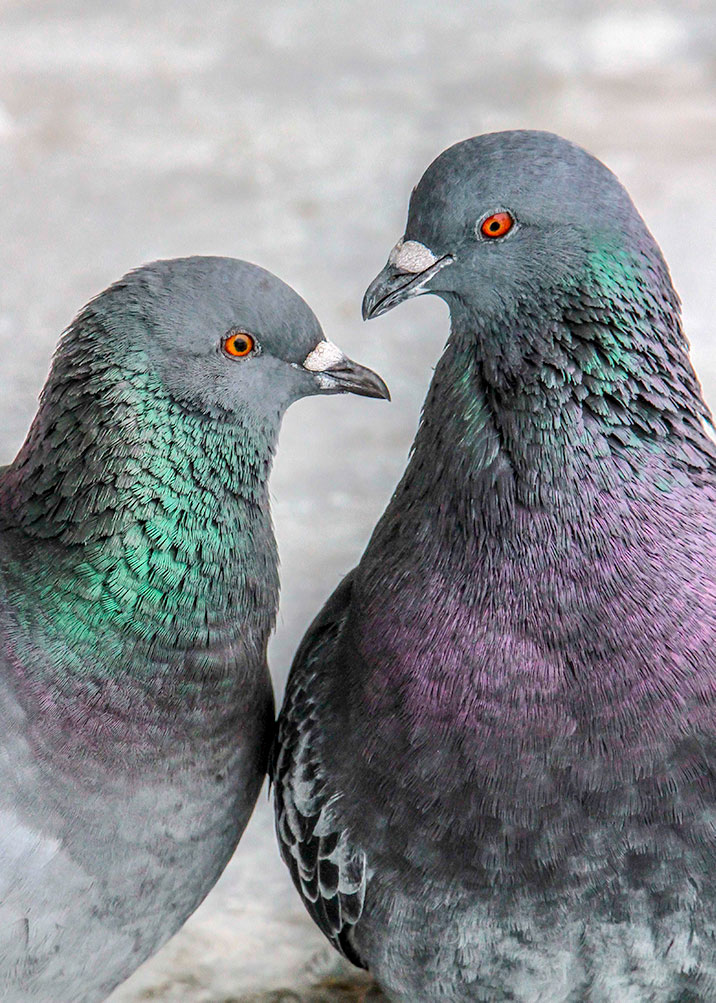 Rock doves are beautiful birds with many subtle variations in feather colors and patterns. For some urbanites, they are the only wildlife to be seen. Photo by Michael Elliott

Rock doves' wild relatives nest on cliffs, and this is one reason they have adapted so well to city life where our giant concrete "cliffs" provide them perfect homes. They are low maintenance birds that can thrive in a wide range of conditions. More than 150 different domestic varieties have been developed by humans—some for meat, others for show by fanciers, and still others for their remarkable navigational ability. Scientists discovered that pigeons have special adaptations that enable them to navigate by sensing the Earth’s magnetic fields as well as drawing on sounds, smells, and visual cues based on the position of the sun. Pigeons can find their way back to their home roost even if they are released from a distant location blindfolded. Throughout history, humans have made use of this ability. Pigeon racing is a popular sport in many countries and during World Wars I and II, the U.S. Army Signal Corps used pigeons to carry messages. The birds were more difficult to trace than conventional communication lines. One retired Army bird named Levi lived to be 31 years old. Feral pigeons, though, usually live between two and three years.

Pigeons, like flamingos and male emperor penguins, produce "crop milk" to feed their young. It is not truly milk, but rather a secretion from the upper portion of the birds' digestive system. Pigeons and doves are also the only birds that are able to drink water without having to tip their heads backward. 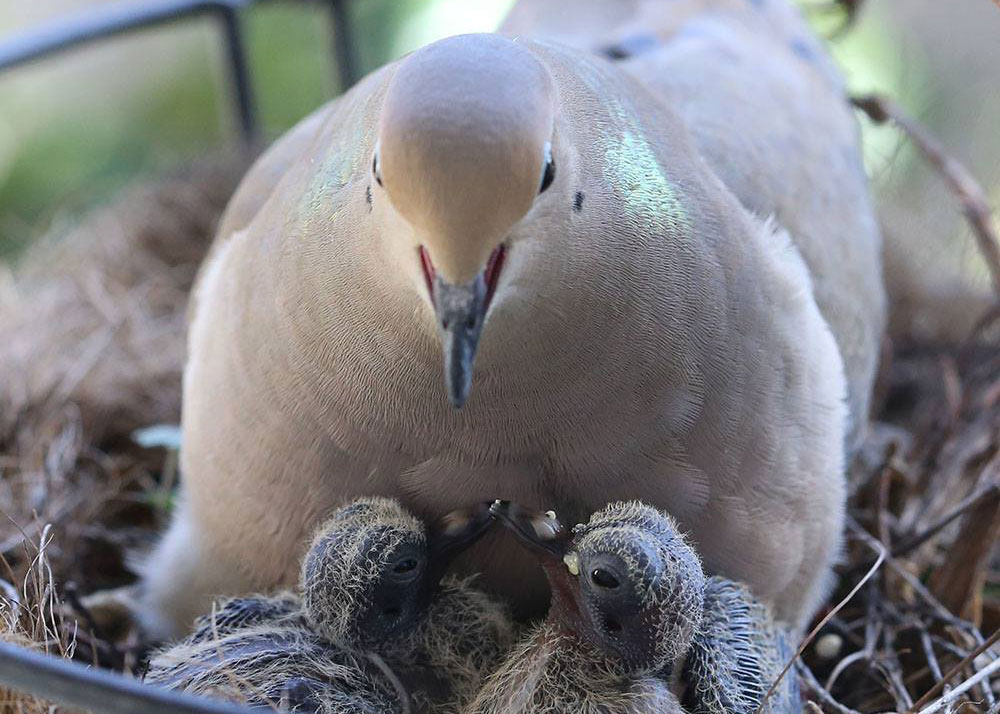 Pigeons and doves (including these mourning doves) are among the few bird species that produce "crop milk" to feed their babies. Photo by Ray Cash

"Crop milk" is a secretion from the upper portion of the digestive system. In this video, you can see how the parent bird regurgitates this nourishing food for the hungry chicks. Video courtesy of Ray Cash

Avian arrivals from other facilities included 12 speckled mousebirds. Native to sub-Saharan Africa, these gregarious little birds flock together in groups of up to 15—a behavior that gives them an advantage against predators. They are sharing an exhibit with spur-winged lapwings across from Gorilla Grill. Two white-tailed jays are now sharing an exhibit space with the oropendolas. Found only in western Ecuador and northwestern Peru, this is the only species of jay in its range. These dapper birds are very vocal and forage for insects and other invertebrates as well as acorns and grains. 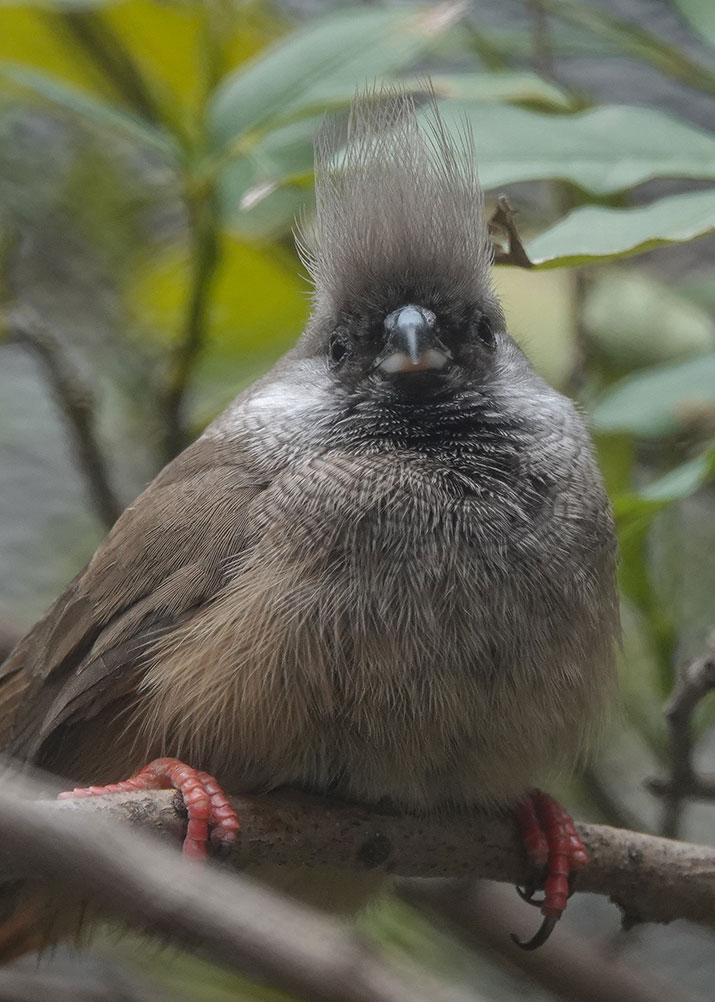 An entire flock of 12 speckled mousebirds are sharing a habitat with spur-winged lapwings. Photo by Lori Conley

A pair of Siberian eagle owls has settled into Roundhouse 52. If these large raptors seem familiar, it's probably because they are a subspecies of the Eurasian eagle-owl that is featured in the World of Birds Show. 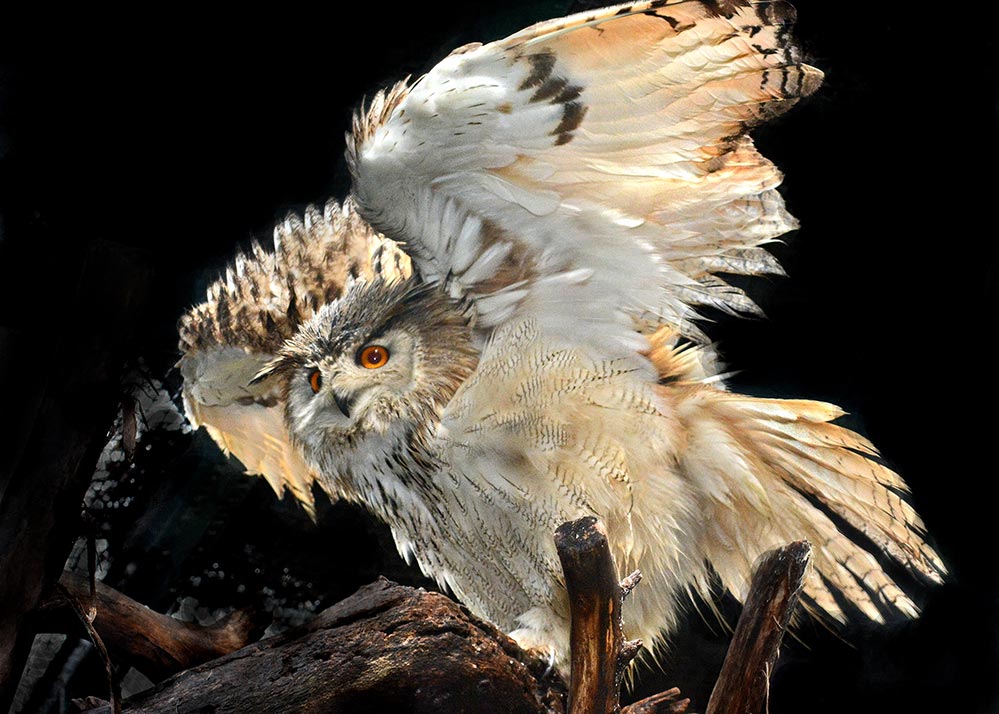 Siberian eagle-owls are adapted to a more specific region than Eurasian eagle-owls. As you might guess from their light coloring, they live in regions with heavy snowfall. Photo by Tad Motoyama 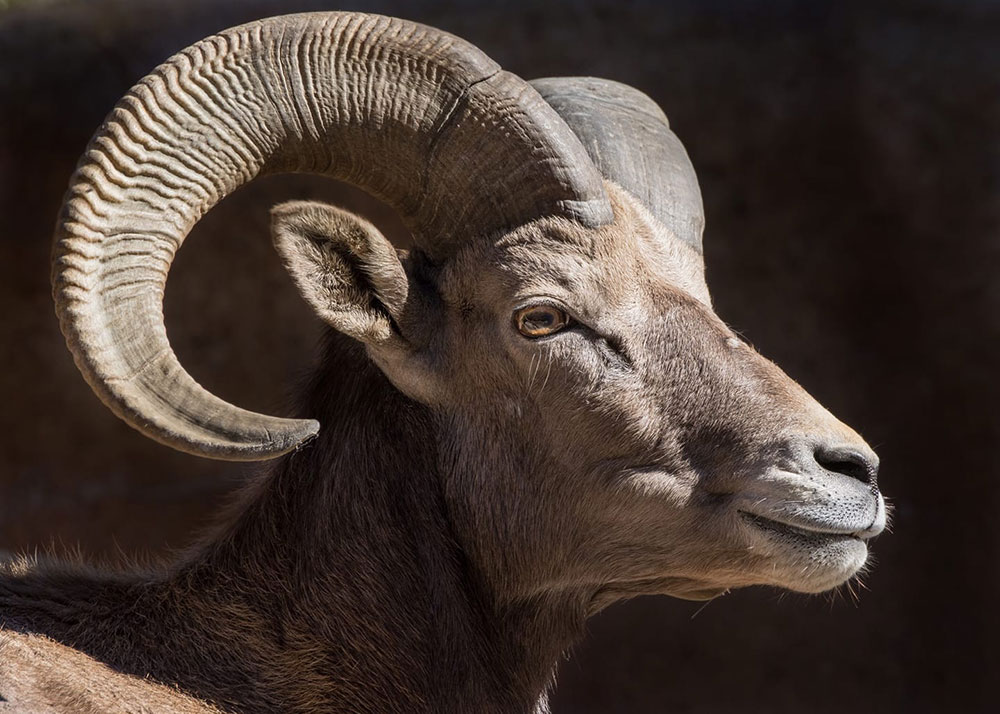 The new male desert bighorn sheep has been very popular with the ewes. That might mean lambs in time for Earth Day! Photo by Matt Carey 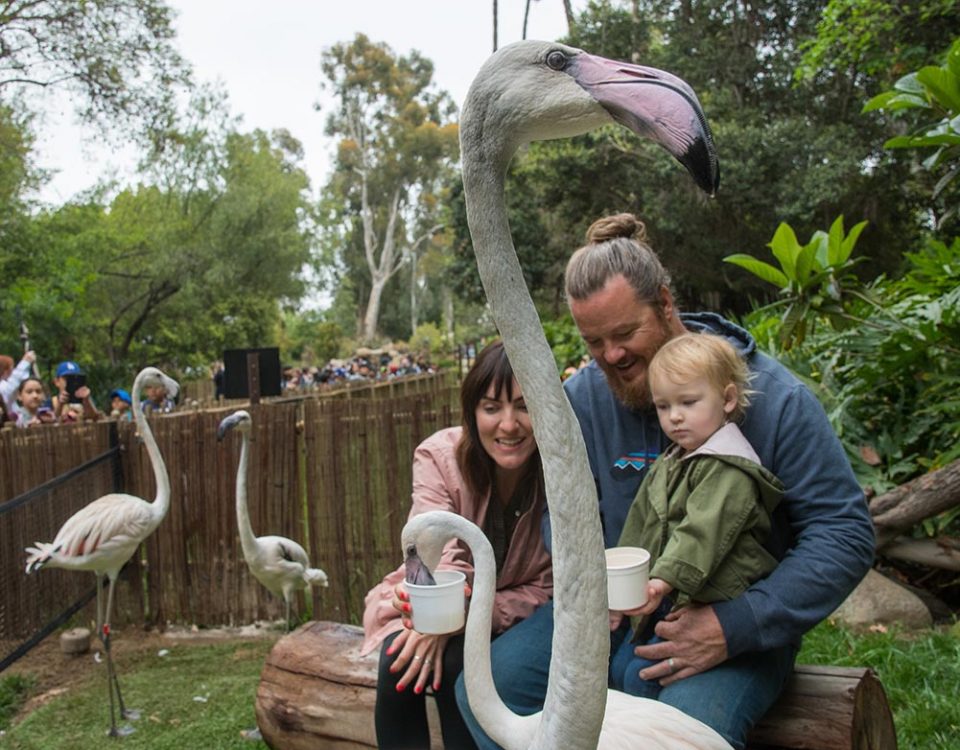 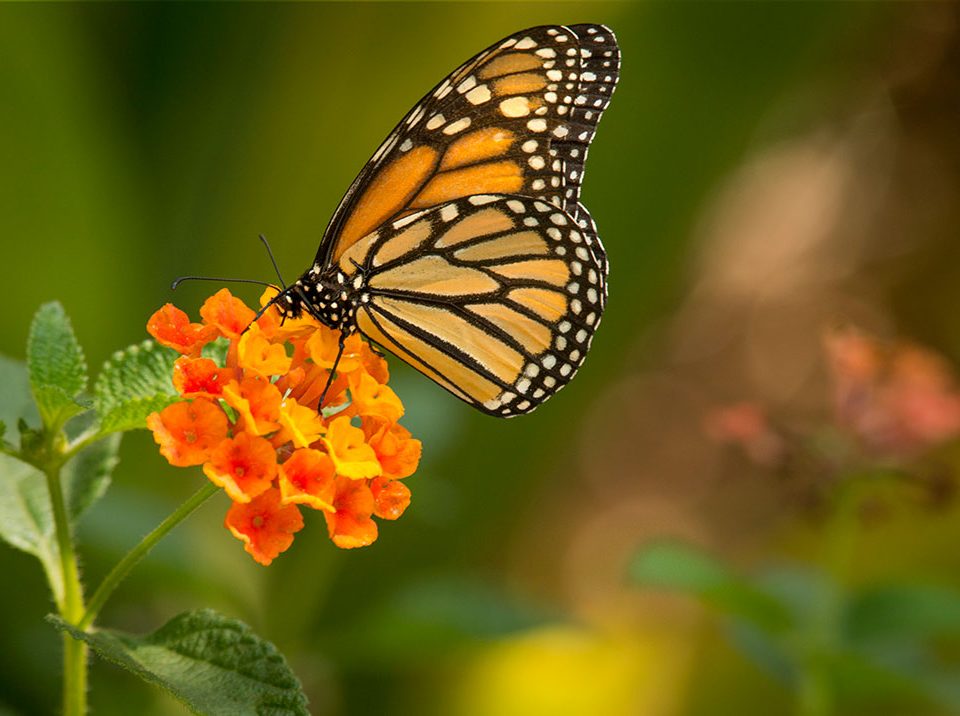 Butterflies are predominantly nectar feeders, but they do not accomplish much in the way of pollination. (Monarch shown feeding on lantana flowers.) Photo by Charlie Morey

Beyond Honey Bees: A Closer Look at Other Power Pollinators