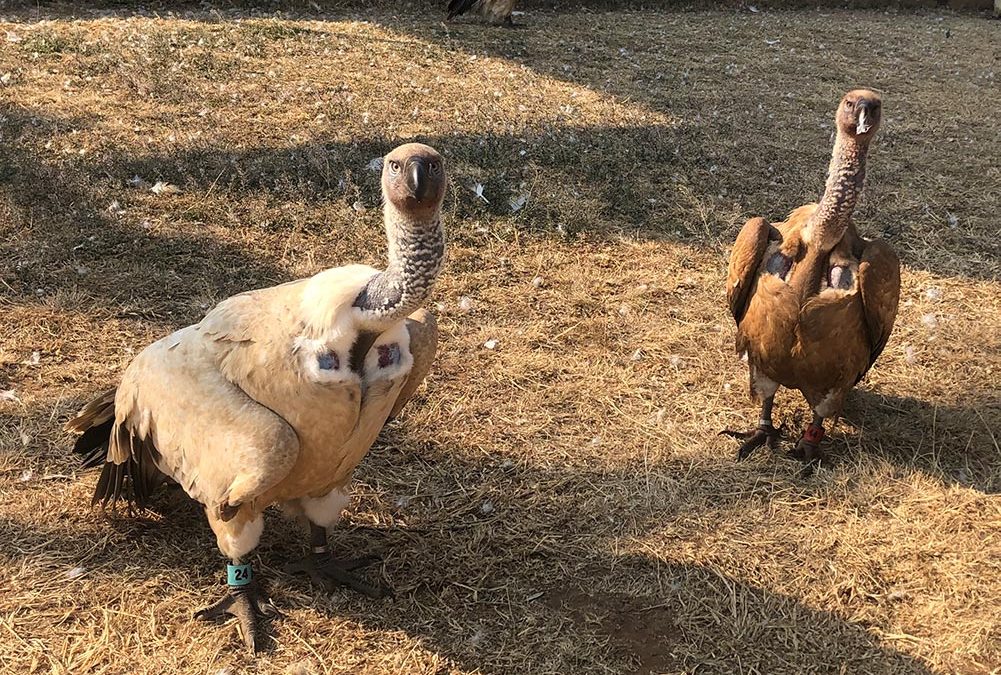 Los Angeles Zoo animal keepers regularly participate in field projects where they gain experience and insights working with wild counterparts of the animals they care for at the Zoo. In turn, the expertise and knowledge they gain from working up-close with zoo animals benefit field researchers studying species in their native habitats. Established in 2003 by donor and former Zoo Commission President Shelby Kaplan Sloan, the Animal Keeper Advanced Studies Fund (now underwritten by donor and former GLAZA trustee Dominic Ornato) encourages these opportunities. This year, five Zoo staffers have received Ornato grants, and the first to venture into the field was Animal Keeper Katie Vincent, whom you may recognize from the World of Birds Show. 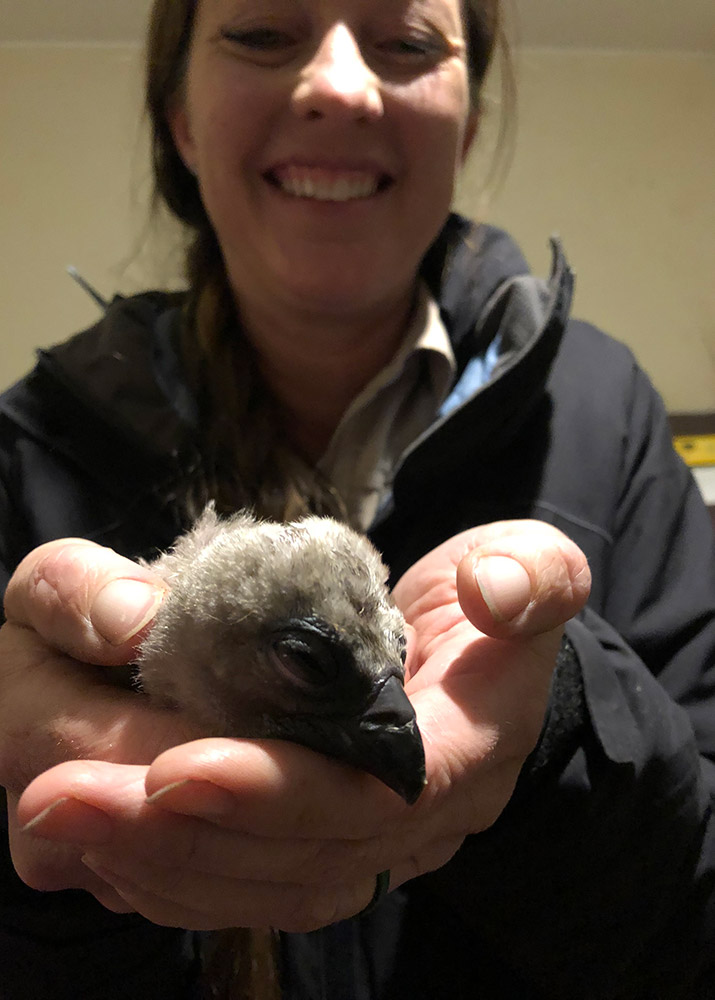 This summer, Vincent spent a month in Hartbeespoort, South Africa, working with VulPro, a rehabilitation and education center that focuses on vultures, who arrive there for a number of reasons, most due to human activities. Some have been injured in collisions with power lines and wind turbines. Others are inadvertently poisoned by diclofenac, the veterinary anti-inflammatory drug that caused Asian vulture populations to crash when farmers began using it extensively to treat their livestock. Still others are deliberately poisoned by poachers to prevent them from calling attention to illegal kills. Some of the rehabilitated birds can no longer fly and are therefore non-releasable. They remain in human care at VulPro, which provides sanctuary to many kinds of vultures needing homes, including Andean condors, black vultures, and king vultures, which are not found Africa.

Upon her arrival, Vincent immediately got started working with three Andean condors who live at the facility. “The staff here has done a little bit of protected-contact target training with them, so I suggested station training, which they aren’t familiar with, but I think at least one of the birds is already taking very well to it,” she commented at the time. With target training, keepers teach an animal to touch a predetermined body part to a particular object, which is helpful in situations where the animal must be re-positioned, or a caretaker needs to be able to see a part of the animal’s body for a health check. Station training, by contrast, teaches an animal to go to a predetermined area or place and not move until cued to do so. “We’ll see how it progresses,” she said. “I’m hoping I can train the birds for behaviors that will be helpful with their husbandry as well as suggesting other behaviors the staff can train in the future.”

Next up? Carcass duty. VulPro relies on donated animal carcasses, mostly pigs and cows from local farms, to feed their vultures. The animals have been dead for varying lengths of time and often arrive in a fairly advanced stage of decomposition, which drove home for Vincent the immensely important role that vultures plan in their ecosystems. “I'm so used to our vultures at the Zoo eating very fresh food,” she said. “This is helping me to not just understand but personally observe that vultures will readily eat things that I can't really imagine any other animal touching.” 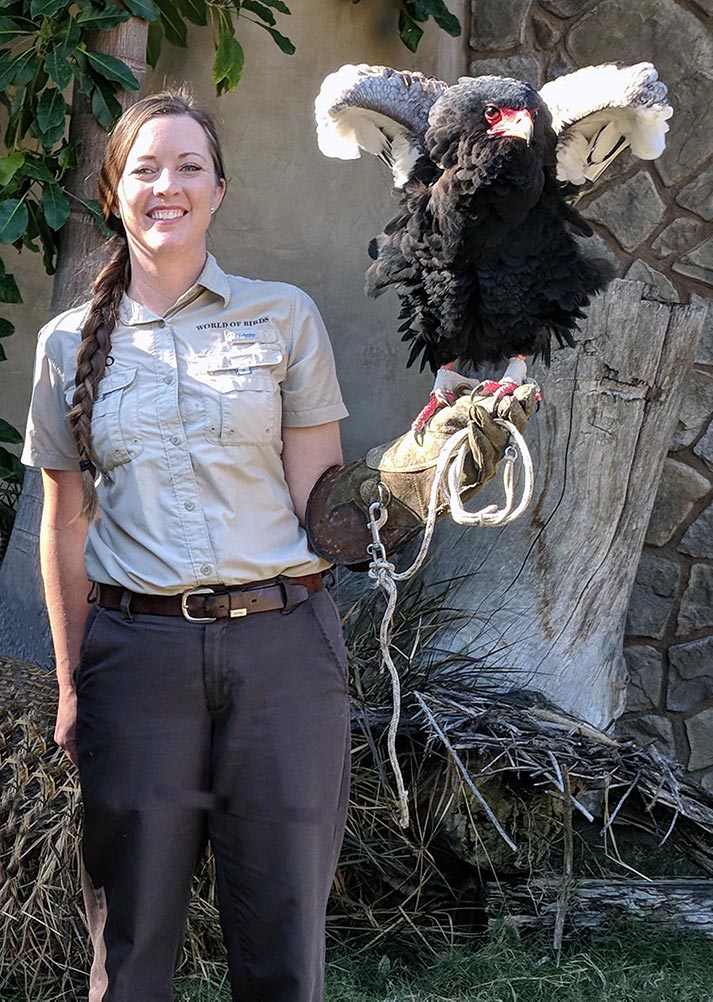 Katie Vincent is part of the Zoo’s World of Birds Show staff. Photo by Katherine Spada

In addition to feeding birds who reside at the facility, carcasses are provided to wild birds at the vulture "restaurant," an area adjacent to the VulPro enclosures where they can safely feed on carrion that is free of lead or other poisons. “The wild vultures arrive at about the same time each day, soaring on the thermals (updrafts of warm air) until some decide it's safe to come down and eat. Soon enough, there are 100-plus vultures at the carcass, along with ibis and pied crows.” The birds can reduce a cow carcass to almost nothing in a few hours.

Vincent’s responsibilities included counting the birds at the restaurant and taking note of any tags or leg bands to help with research. Before long, she also headed out VulPro staff to check in on wild vulture nests in the area. Stay tuned for more on Vincent’s trip in next month’s Zooscape. 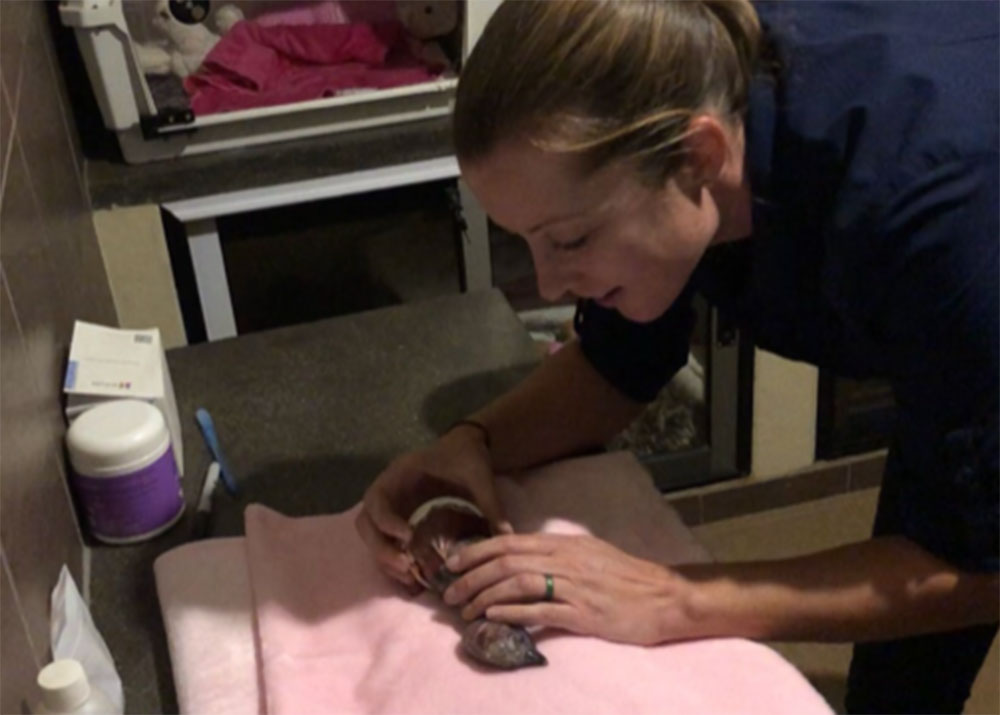 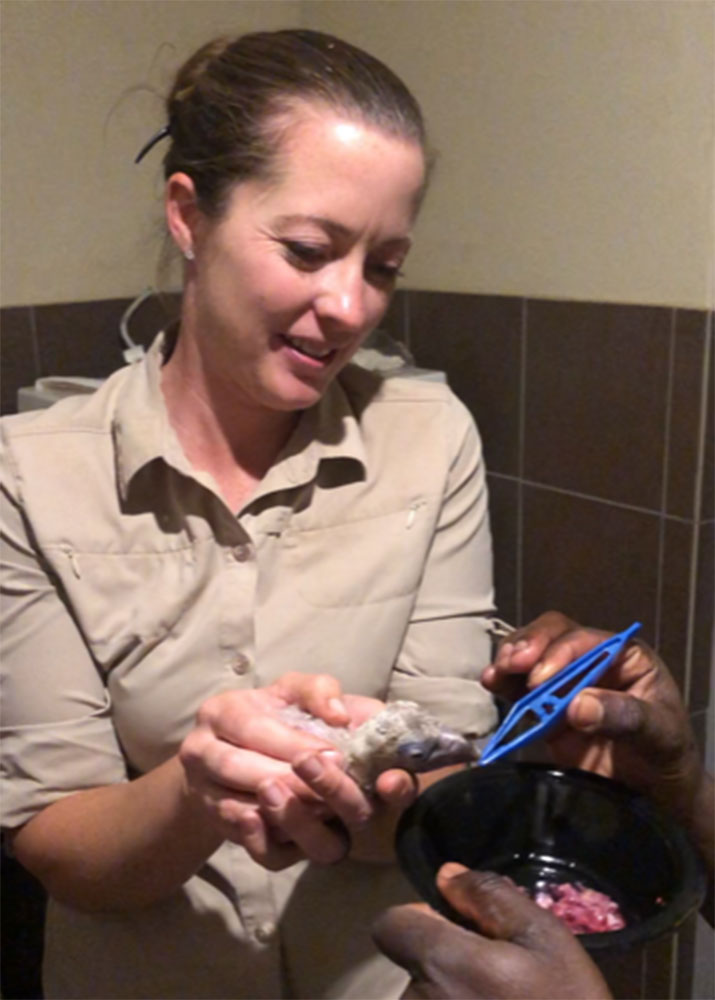 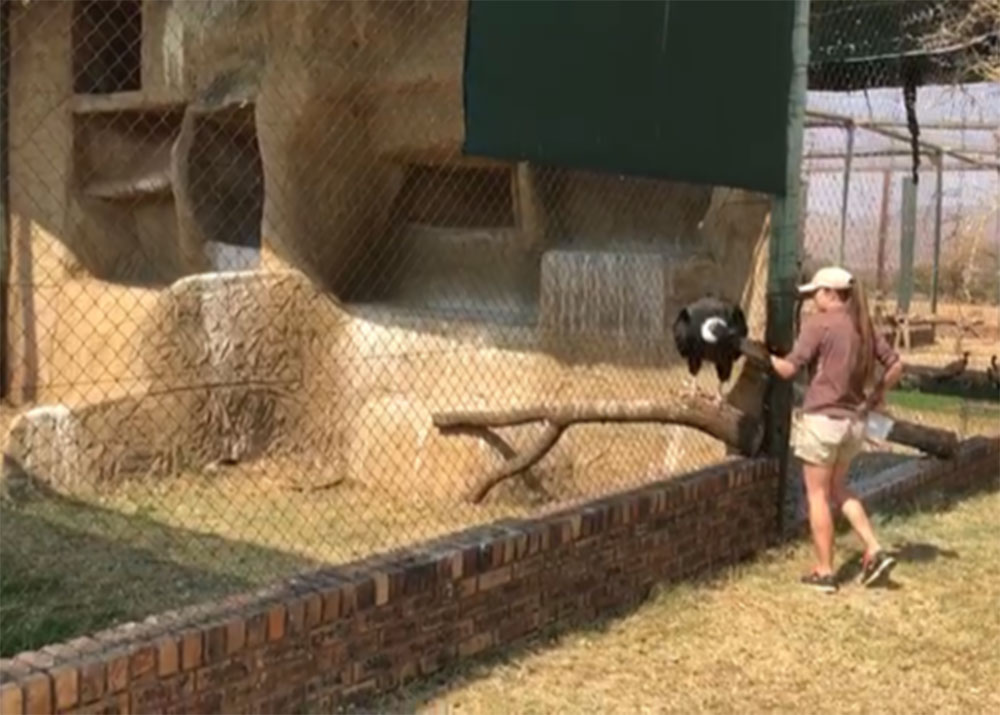 Vincent’s work with Vulpro included daily tasks such as feeding, cleaning, watering, and general assistance with the resident vultures. She assisted with newly hatched chicks prior to their being returned to their parents and she accompanied and assisted Vulpro staff with fieldwork that included monitoring of nesting vultures and conducting powerline surveys. She also put her Zoo experience and skills to good use training resident birds for enrichment and husbandry behaviors. Photos courtesy of Katie Vincent and Vulpro. 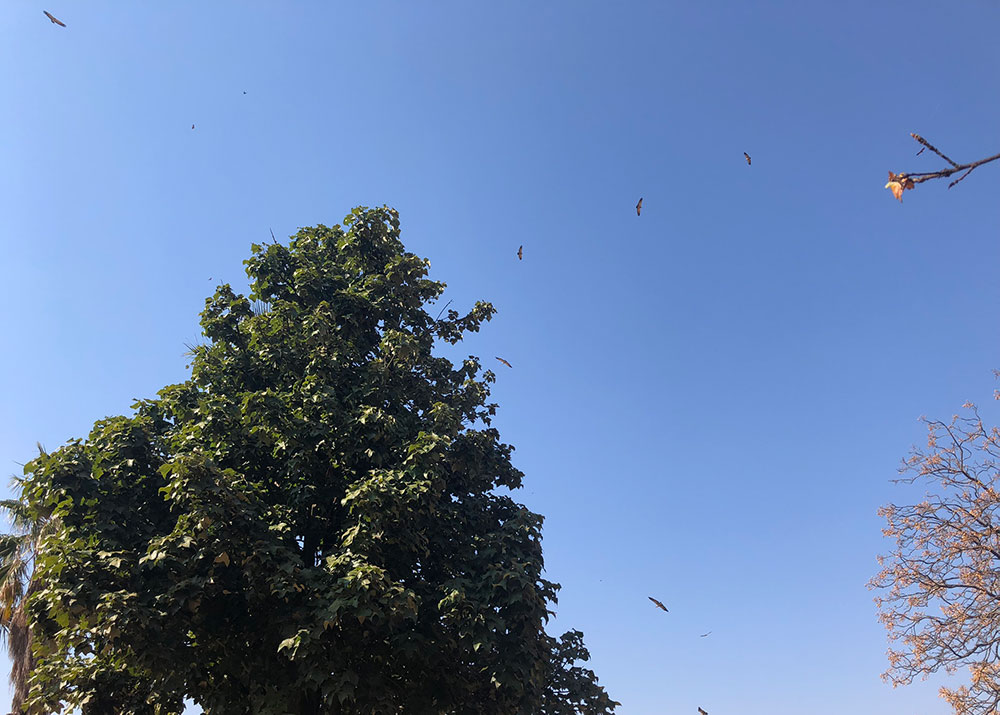 Delve into the amazing world of vultures and learn more about the vital role they play in ecosystems everywhere at this year’s International Vulture Awareness Day celebration on September 7! Katie Vincent will give a talk on her VulPro experience at 12:30 p.m. 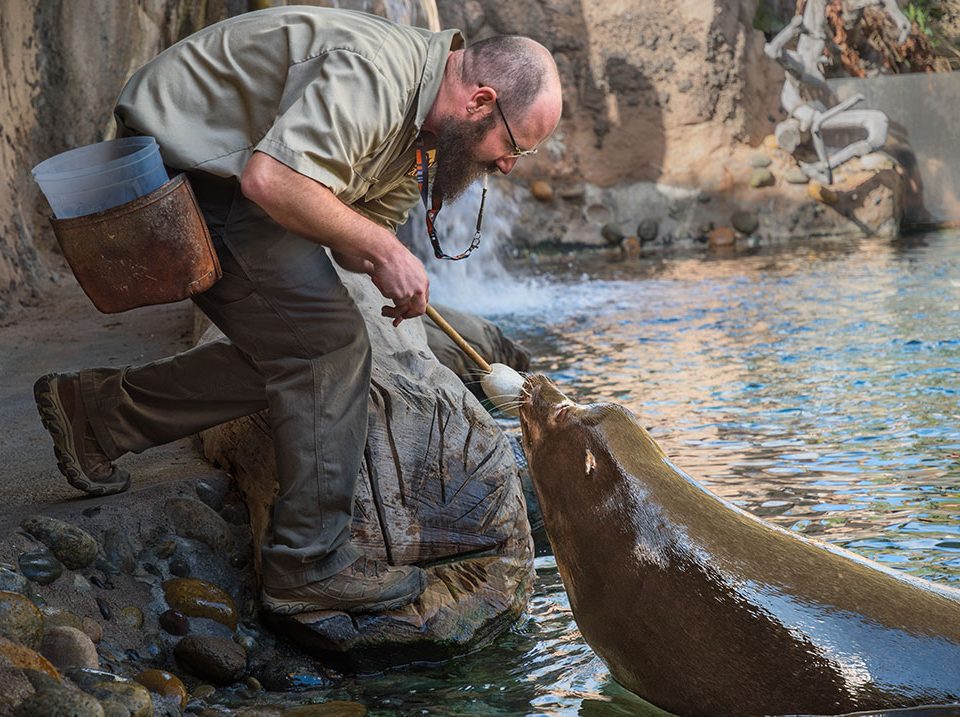 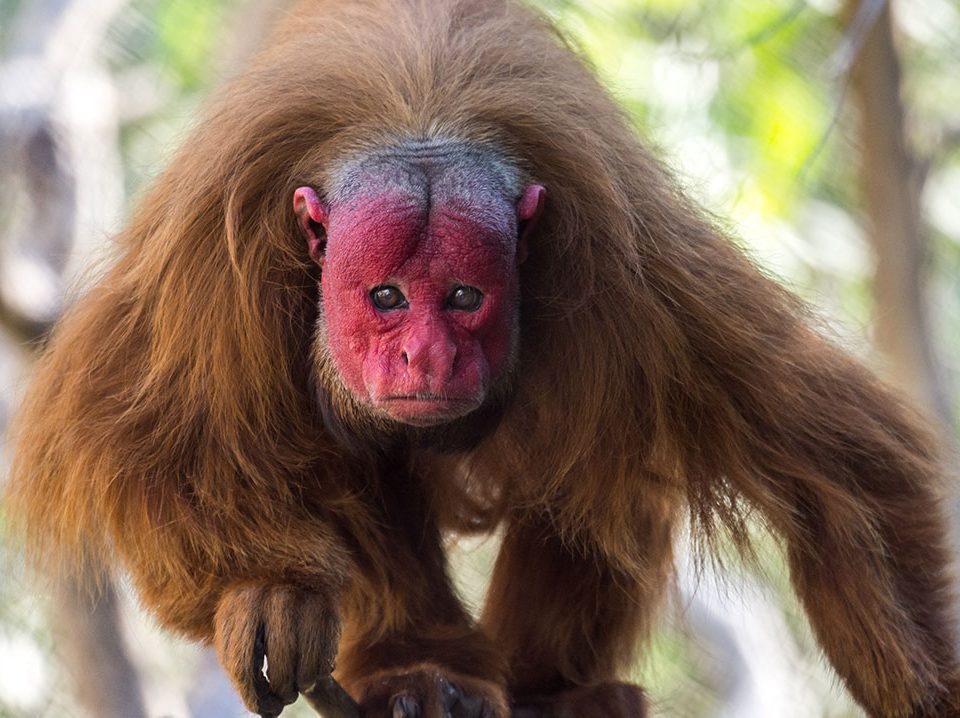