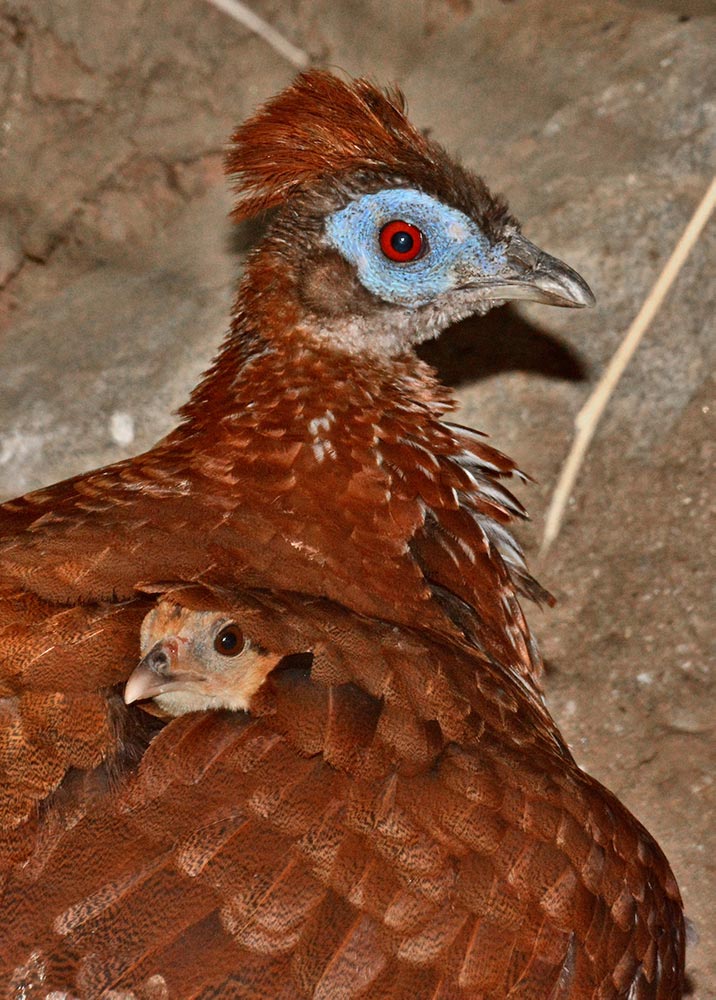 Hitching a ride with mom! Photo by Tad Motoyama

Parenting styles vary wildly in the bird world. In some cases, the young spend an extended period of time with the parents. This is often the case with raptors, corvids (such as ravens), and parrots-bird families in which the young must learn many complex survival skills. In the wild, for example, California condors produce a single egg every one or two years. By contrast, mourning doves can produce up to six clutches of (usually two) eggs in a single season. Bornean fire-back pheasants will produce four to eight eggs in a season. In June, a female joined the male Bornean fire-back pheasant in a roundhouse habitat between the hippo and black bear exhibits. Nature took its course and in mid-August, five chicks hatched. In this sequence of photos, each taken one week apart, you can see how fast the chicks grew! 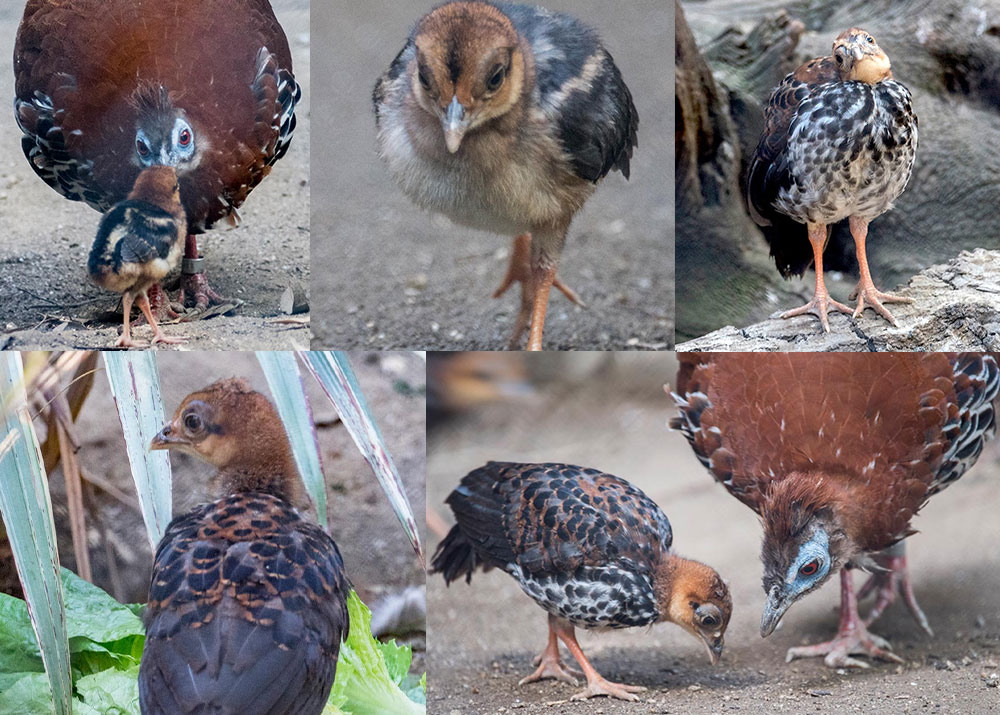 These photos, taken each week since the chicks hatched, show how rapidly these birds mature. Photos by Susan Pearson

A passel of poison dart frog eggs from three different species hatched recently: green-and-black, mimic, and uakari poison frogs. With these tiny tropical frog species, the parents are very attentive. The female lays fewer than 10 eggs (with an average of four or five) and the male places them in pools of water, often rain trapped in cup-like bromeliad plants. Once they begin hatching, the female frequently produces infertile eggs that the male feeds to the developing young. Smaller tadpoles are sometimes fed to the larger ones, which may seem disturbing to us, but it offers a greater chance that the stronger froglets will survive. While the new tadpoles at the Zoo are being cared for in an off-exhibit area, you can see many adults in the poison frog display in Rainforest of the Americas.

Tadpoles are the larval form of frogs and go through a very dramatic transformation. Their change from aquatic to terrestrial life means breathing through lungs instead of gills, getting around with legs instead of fins, and switching from a herbivorous diet of algae and other plants to a carnivorous existence feeding on insects and other invertebrates. You can see mimic poison frogs like this one (as well as the green-and-black and uakari) in Rainforest of the Americas. Photos by Tad Motoyama 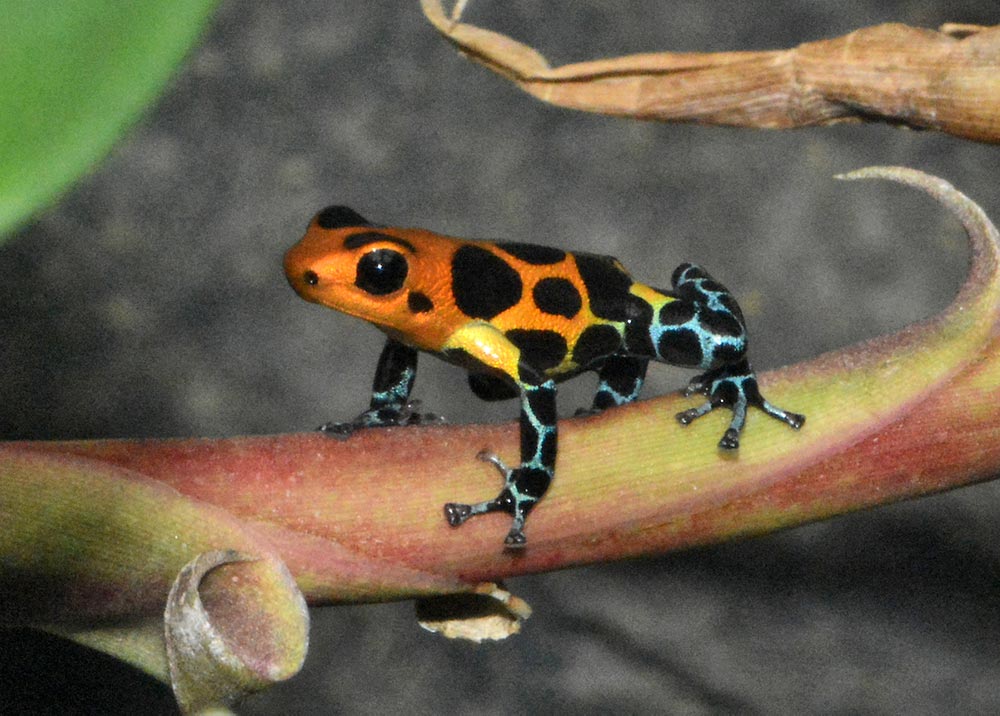 A crested capuchin monkey was born on August 17 and is with the parents in their habitat located in the Zoo's South America secion. A red-flanked duiker was born earlier in August and a Chinese goral kid was born on August 3 and can be seen with the mother in one of the hillside habitats across from the Chimpanzee Penthouse. These small goat-like animals are native to mountainous regions of Myanmar, China, India, Thailand, Vietnam, and possibly Laos. They are over-hunted in some parts of their range and are classified as Vulnerable by the International Union for the Conservation of Nature (IUCN). Since 2000, 15 Chinese goral kids have been born at the L.A. Zoo as part of the Species Survival Plan. 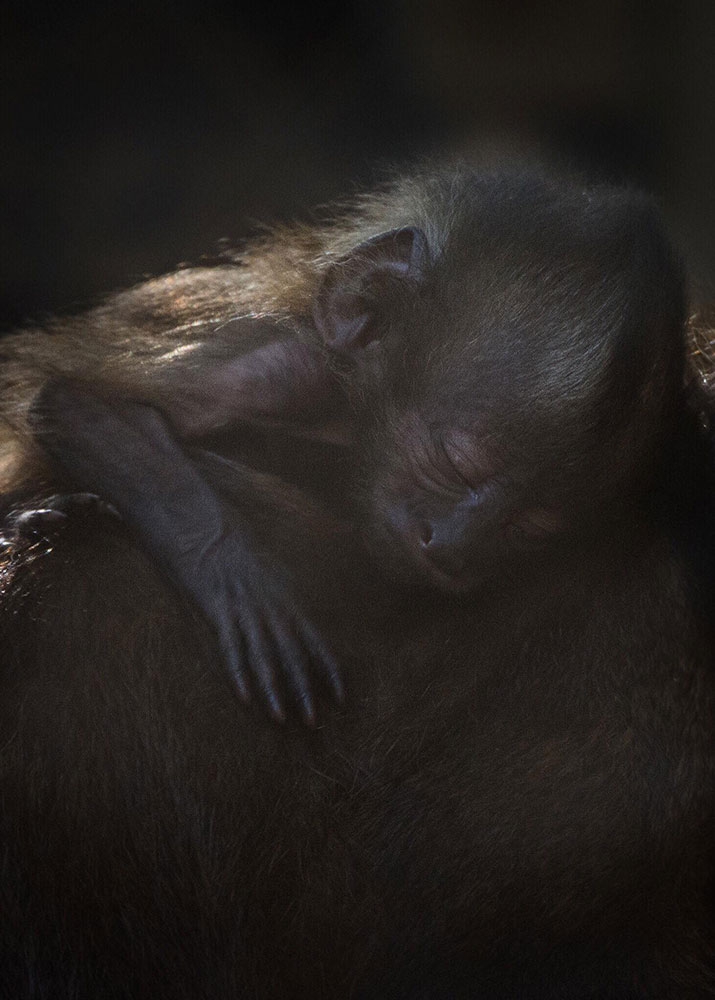 The second crested capuchin monkey youngster born this year is being raised along with a sibling born earlier this year by the parents in the Zoo's South America section. Photo by Matt Carey 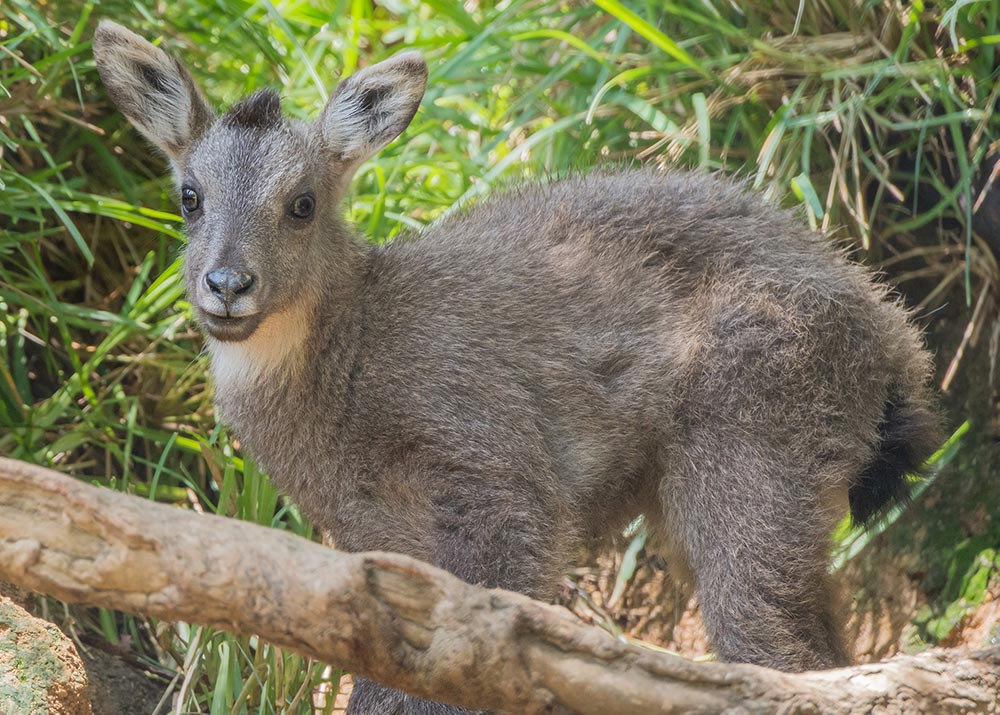 The newest Chinese goral kid is with the parents in the hillside habitat across from the Chimpanzee Penthouse. Photo by Matt Carey 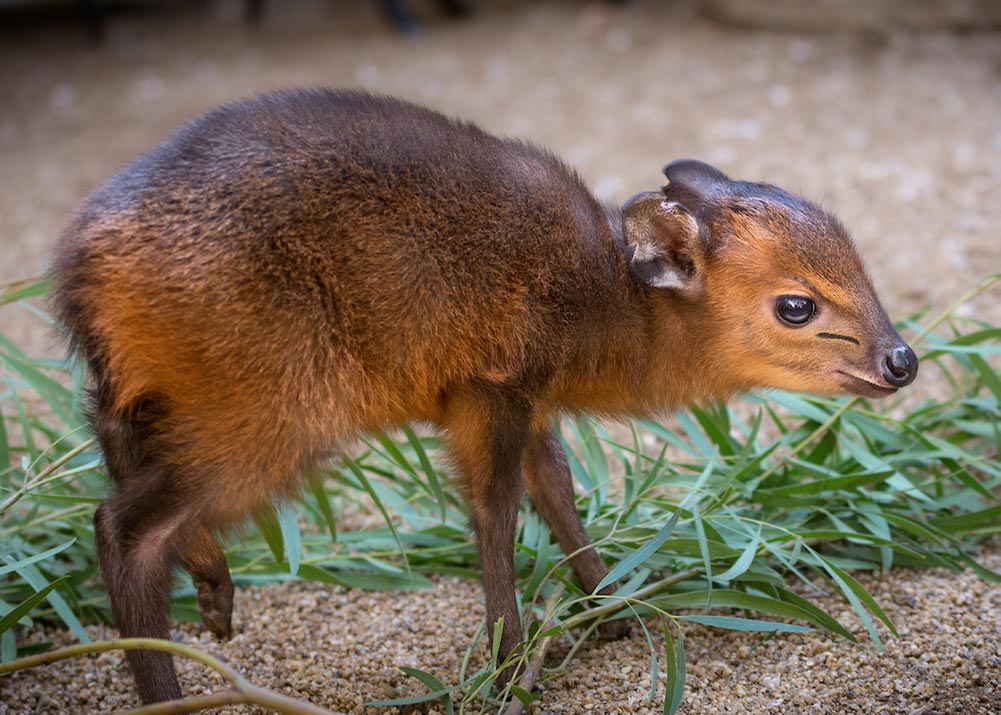 Red-flanked duiker youngsters usually spend some time in the Winnick Family Children's Zoo nursery hoofstock yard before returning to their parents. This helps them become accustomed to the sounds and movements of people. Photo by Jamie Pham

In June, nine Mojave Desert sidewinders arrived in quarantine and, on August 18, a litter of 13 babies was born to one of the females in that group. Like all rattlesnakes, sidewinders bear live young—a process that looks much like a mammal birth, though the physiology is a bit different. Reptiles do not have wombs, so the mother retains the eggs inside her body until the babies are ready. Each baby emerges in a translucent membrane that s/he must break through to take that first breath. This is a very large litter and, when the babies have grown enough, many will find a new home at the Moscow Zoo and at other AZA-accredited zoos.

This newborn sidewinder breaks out of the protective membrane that encased it while developing inside its mother's body and takes a big first breath. Video by Chris Rodriguez 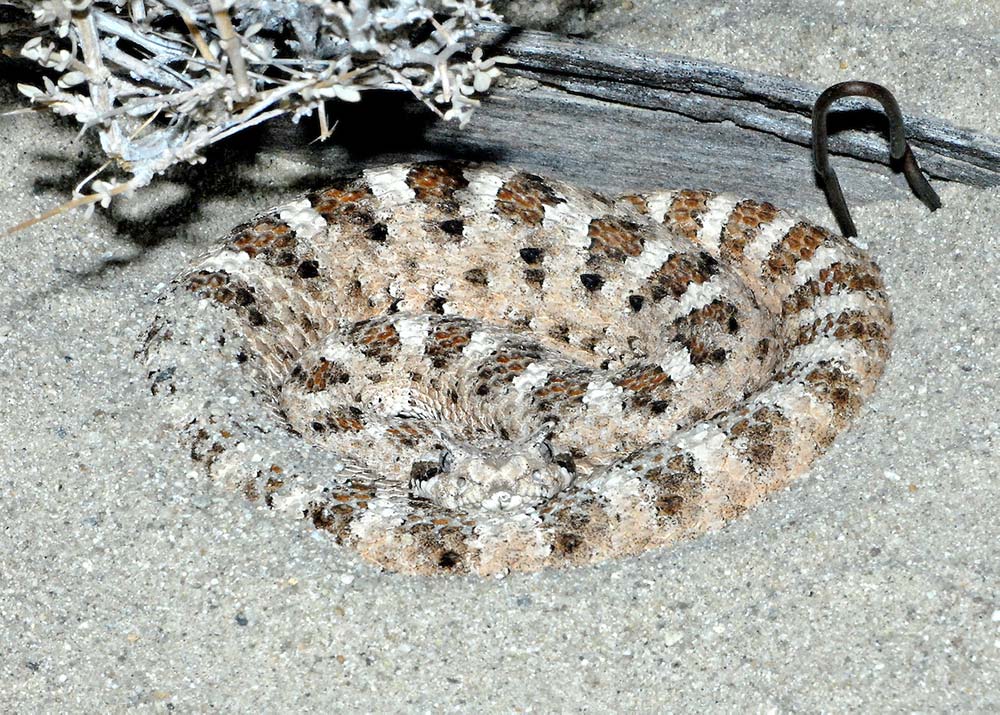 In addition to their unique method of moving across desert sand, sidewinders are also able to quickly submerge themselves in sand. Photo by Tad Motoyama

The Von der Decken's hornbill chicks who hatched sometime between mid-July and mid-August emerged from their nest box with their mother in September. With this bird species, the male locates an appropriate tree cavity, then entices a female by bringing her gifts of food and building materials. The female enters the cavity and seals it up with a mud-like mixture of soil and dung, which becomes brick-like when dry, until just a thin aperture remains. She lays her eggs inside the nest. For more than two months, the male feeds the female through the small vertical slit. In June, animal care staff noted that the female von der Decken's hornbill had been sealed into her nest box. In July, keepers noticed chick sounds coming from inside. In early September, the female broke out of the nest so she could help the male feed their four hungry chicks who emerged from the nest box fully flighted. You can watch the hornbill parents tending to their youngsters in the roundhouse exhibit opposite the gerenuk habitat in the Africa section of the Zoo. 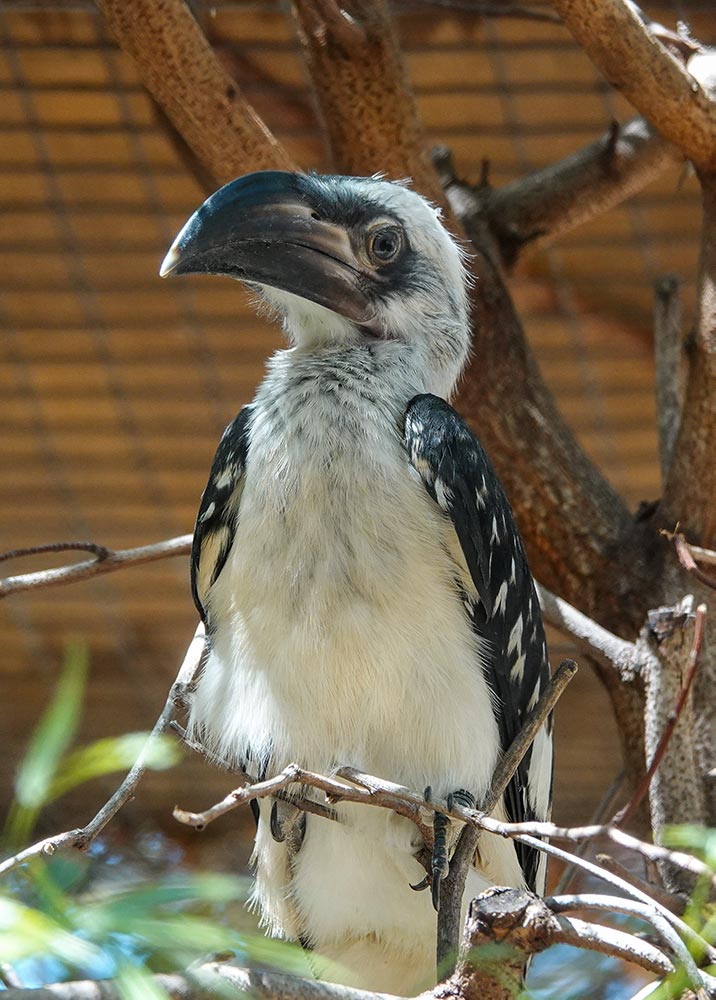 By the time Von der Decken's hornbill chicks emerge from the nest box, they are about the same size as their parents, but they are not yet fully independent and still retain some of their baby fluffiness. Photo by Lori Conley

In 2004, the Zoo was fortunate to acquire the various species of cycads growing in the "dinosaur garden" between Zoo Grill, Administration, and the Winnick Family Children's Zoo. They were confiscated at the conclusion of a lengthy US Fish & Wildlife Service sting operation that busted an international smuggling group responsible for poaching these rare plants from the wild. Most cycads come from miniscule natural ranges and face the same threats as endangered animals: development, habitat loss, climate change, and illegal collecting. Happily, many species are now commonly available from nurseries, but they are slow growing and frequently require many years to reach reproductive age. So, the opportunity to see an "old growth" stand of Karoo or Zululand cycads in their native South African habitats is becoming increasingly rare. 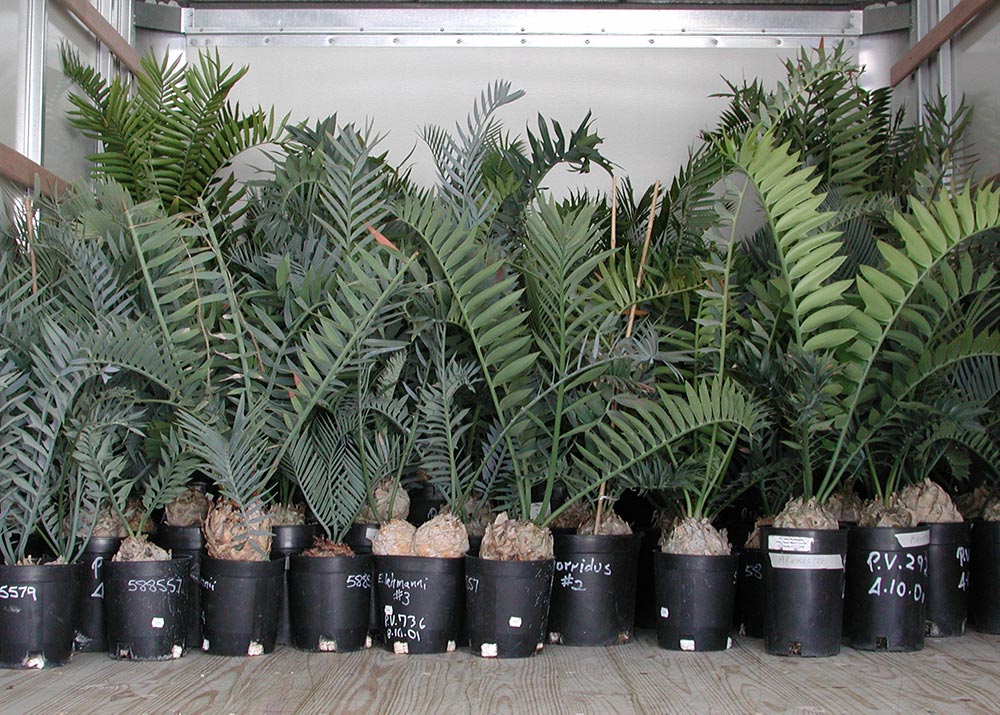 The cycads that are now in the "dinosaur garden" were much smaller when they arrived in 2004! Photo by Bob Wickham

This order of plants has been around since dinosaurs dominated the planet and predates flowering plants. Though they resemble palms, they are actually more closely related to conifers and produce pollen (male germ cells-plant equivalent of sperm) and ovules (female germ cells-plant equivalent of eggs) in large cone-like structures. Most cycads are dioecious, which means individual plants are either male or female, and it can be difficult to sex them until they are mature enough to produce cones. One of the Zululand cycads (Encephalartos ferox) in the Zoo's dinosaur garden is a male plant that produces cones fairly regularly and is now developing twins. It will take months for them to mature, though without a nearby female of the same species that is also in reproductive mode, there will be no viable seed. (One of the dioons, a cycad native to Mexico and Central America is also making a cone.) 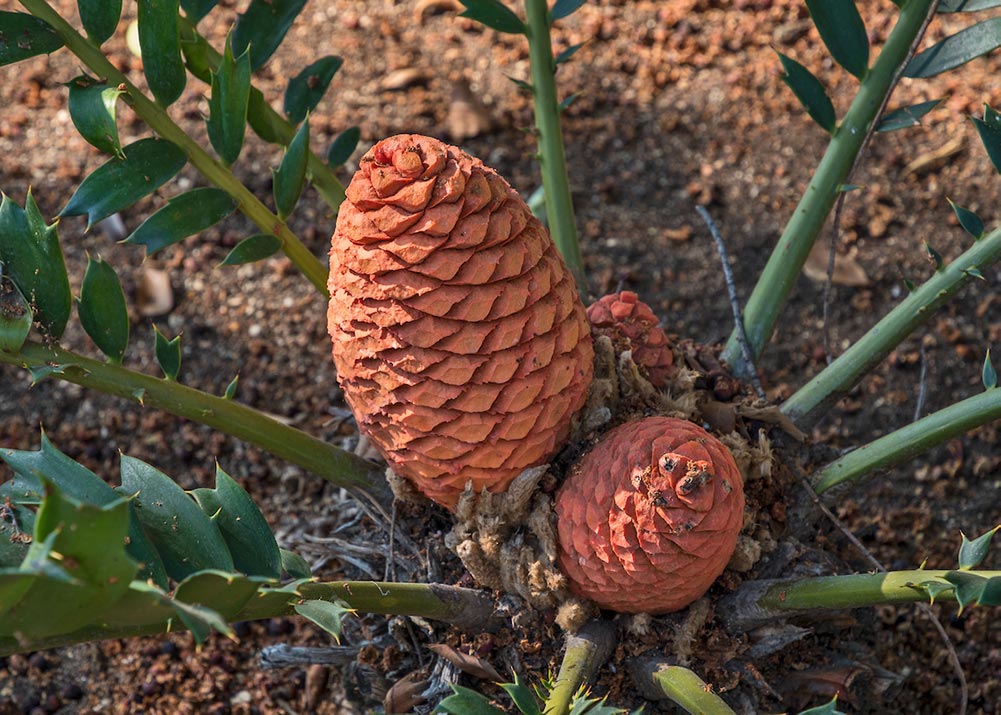 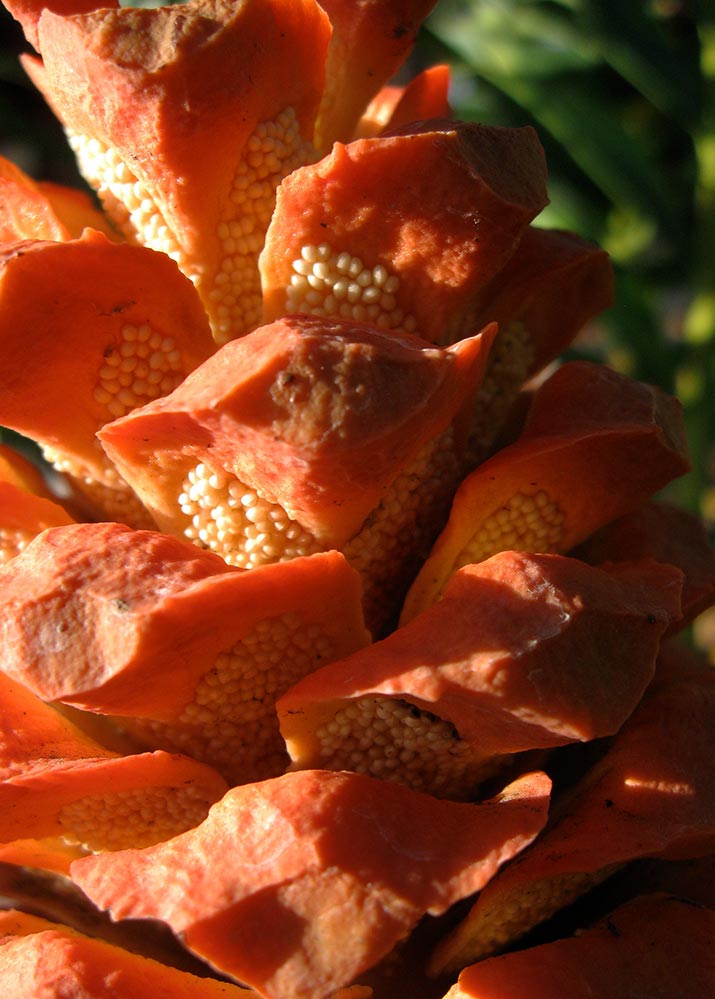 Pollen capsules are visible inside the cone of one of the Zoo's male Zululand cycads. Photo by Sandy Masuo

In August, when Animal Keeper Katie Vincent was in South Africa working with VulPro, a South African NGO that is dedicated to vulture conservation, she discovered a related species of cycad growing on grounds and shared a photo of the plant with ripe cones. 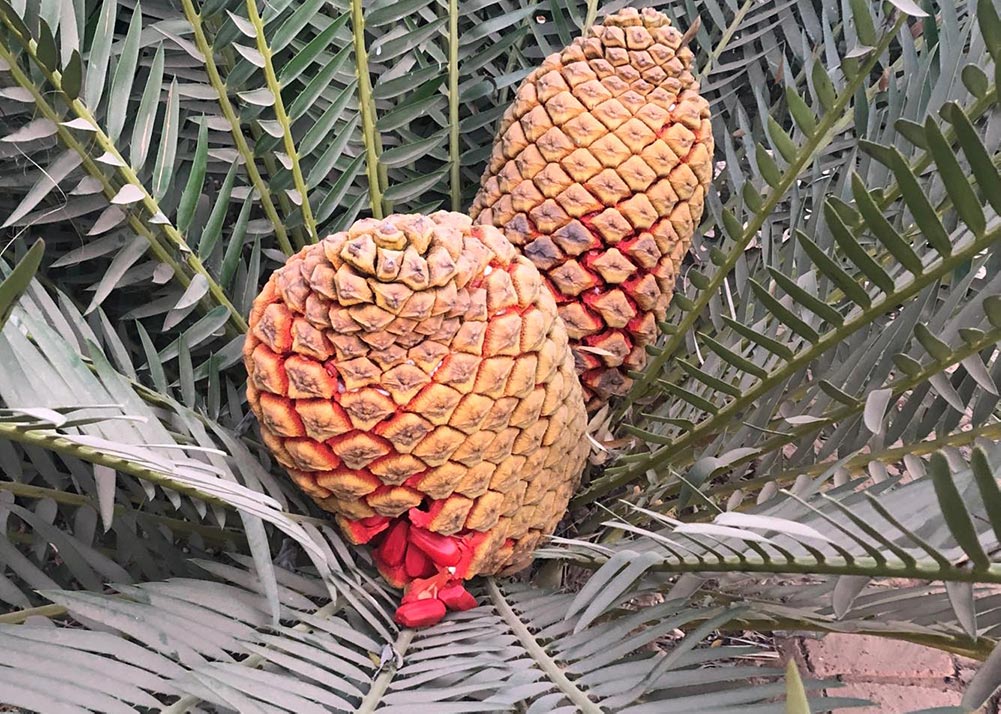 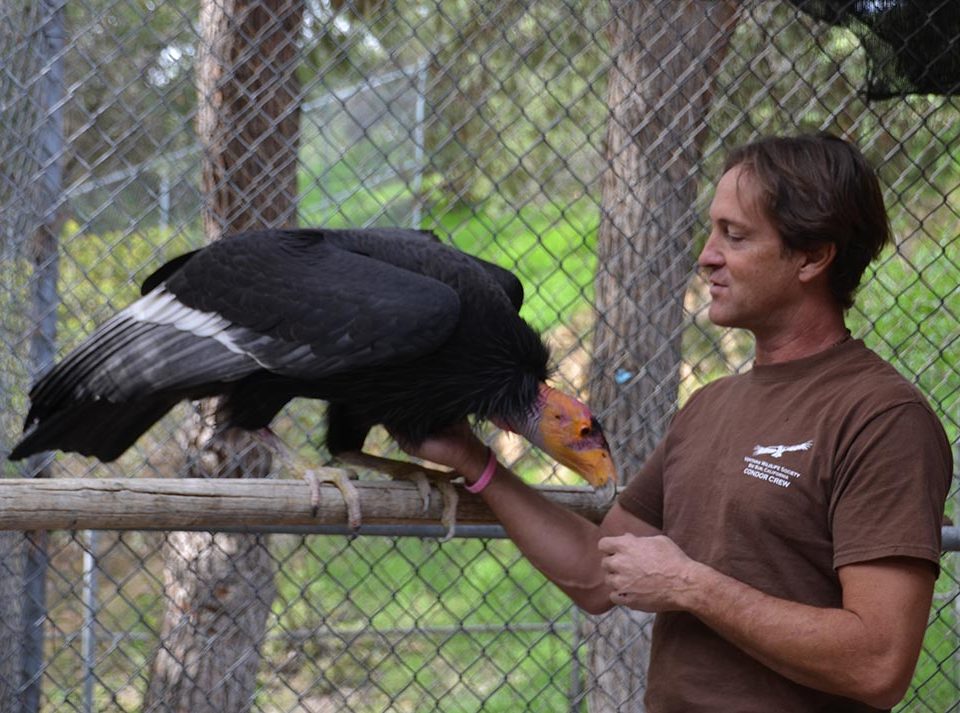 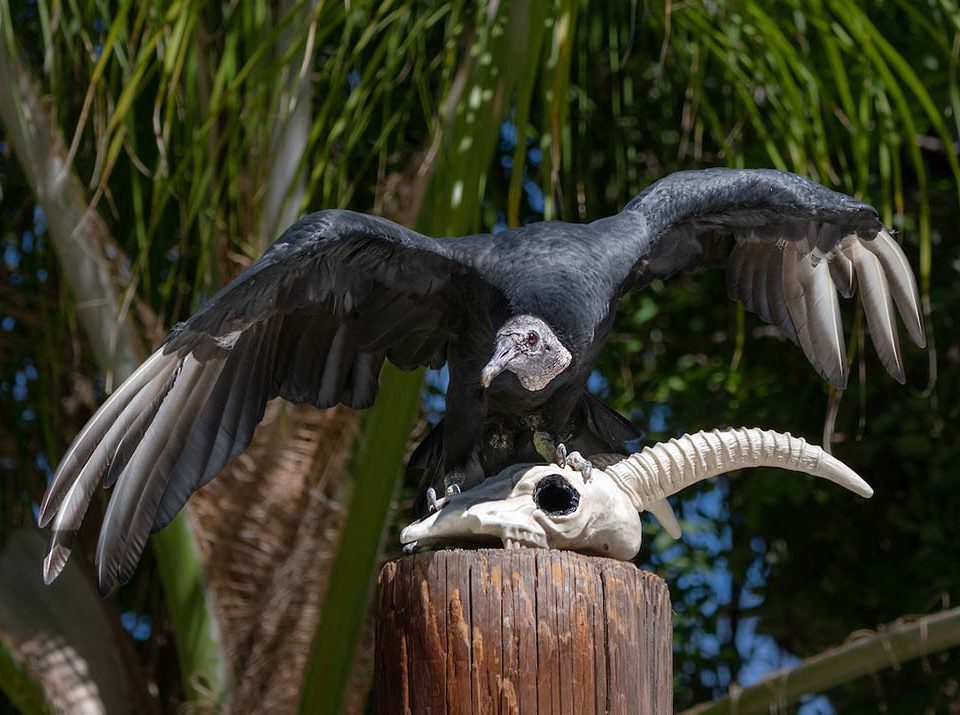 Join Morticia the black Vulture for a special Halloween edition of the World of Birds Show! Photo by Jamie Pham