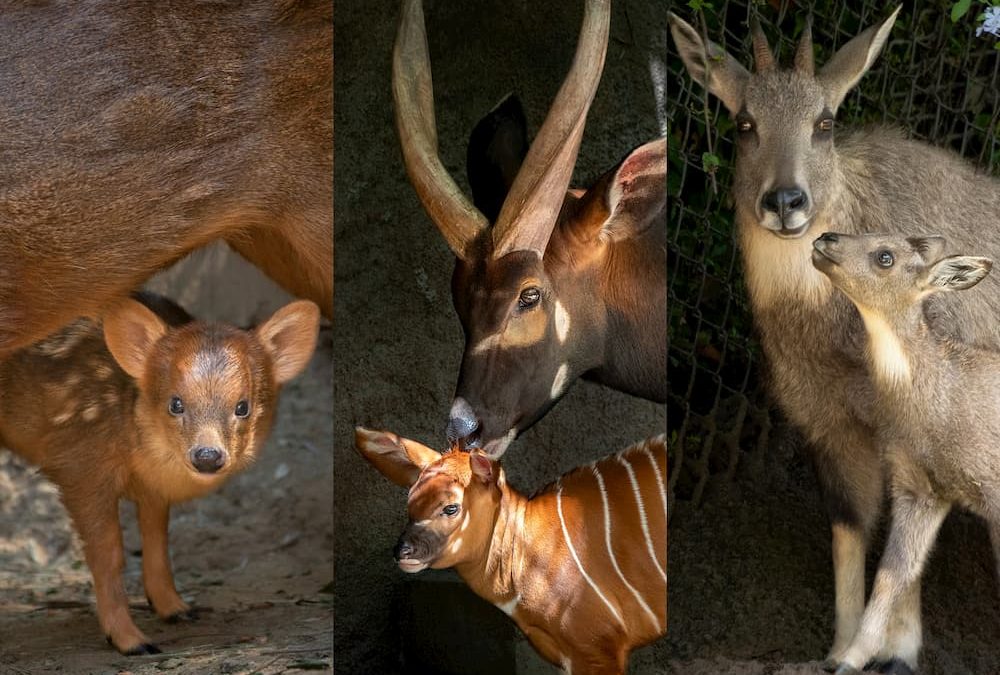 On May 2, a female southern pudú was born. Two species make up the genus Pudu, the world’s smallest deer. The origin of the name “pudú” (“small deer”) is Mapudugun, the language of the indigenous Mapuche people of central Chile and south-western Argentina. Northern pudú are found in Venezuela, Colombia, Ecuador, and Peru; the southern pudú in southern Chile and south-western Argentina. The new fawn is the second offspring of mom Steph and dad Mario, and is 17-month-old Haechan’s sibling. Haechan made a splash last year when his namesake—K-pop star Haechan (Lee Dong-hyuck) of NCT 127—visited the Zoo. This new little one won’t share the spotlight with her sibling, though. She’ll remain behind the scenes with her parents for the time being. Our pudu breeding efforts are part of the Species Survival Plan for this vulnerable species, whose numbers are decreasing in the wild.

Also on May 2, a female Eastern bongo was born. Bongos are among the largest of the forest antelope and are divided into several subspecies. The L.A. Zoo has a long history with this species. The bongo, like the Arabian oryx, California condor, the peninsular pronghorn, and the golden lion tamarin, has been one of the Zoo’s great conservation success stories.

In 1964, the year following Kenya’s independence, the late actor William Holden and television personality Don Hunt traveled to the newly established republic and were smitten by its natural grandeur. Within a few years, their interest in African wildlife shifted from hunting to conservation, and the Mount Kenya Game Ranch was established on 1,216 acres of rangeland surrounding the renowned Mount Kenya Safari Club in the foothills of Mount Kenya—home range of the remaining Eastern bongo. Hunt, in concert with various wildlife organizations and North American zoos, established a breeding program. It took nearly 10 years to implement the first stage of the plan, but when completed, 36 young Eastern bongos had been sent to North American zoos.

In 1975, then-Zoo Director Warren Thomas had been following the progress of the breeding program and was determined to bring bongos to Los Angeles. On May 30, 1975, one male and one female Eastern bongo arrived from Kenya, founders of the Zoo’s bongo breeding program. Over the years, 79 calves were born at the Zoo. In 2004, a group of 20 Eastern bongos bred in North American zoos (including a female from L.A.) were released at the Mount Kenya Game Ranch. These beautiful antelope had all but disappeared from the slopes of Mount Kenya, and the Zoo has made breeding the species a priority once more. Logging and illegal hunting have caused numbers to decline; currently, fewer than 100 individuals survive in four fragmented areas in the Aberdares Forest and on Mt. Kenya.

A male Chinese goral was born on May 31. Gorals, which you can find in the Zoo’s hillside habitats across from the Chimpanzee Penthouse, are small goat-like ungulates. This species is also known as the gray long-tailed goral and is native to mountainous regions of Myanmar, China, India, Thailand, Vietnam, and possibly Laos. In some parts of its range, it is over-hunted and the IUCN considers it Vulnerable.

Four Bornean fireback pheasants hatched. This species will produce four to eight eggs in a season. The current breeding pair has been together since June 2019 in a roundhouse habitat between the hippo and black bear exhibits. Last August, five chicks hatched. Bornean crested fireback pheasant populations have been declining due to habitat loss and over-hunting in some areas. The species is classified as Near Threatened by the IUCN.

Another red-billed blue magpie hatched, for a total brood of four chicks. Two rock doves hatched at the World of Birds Show compound. 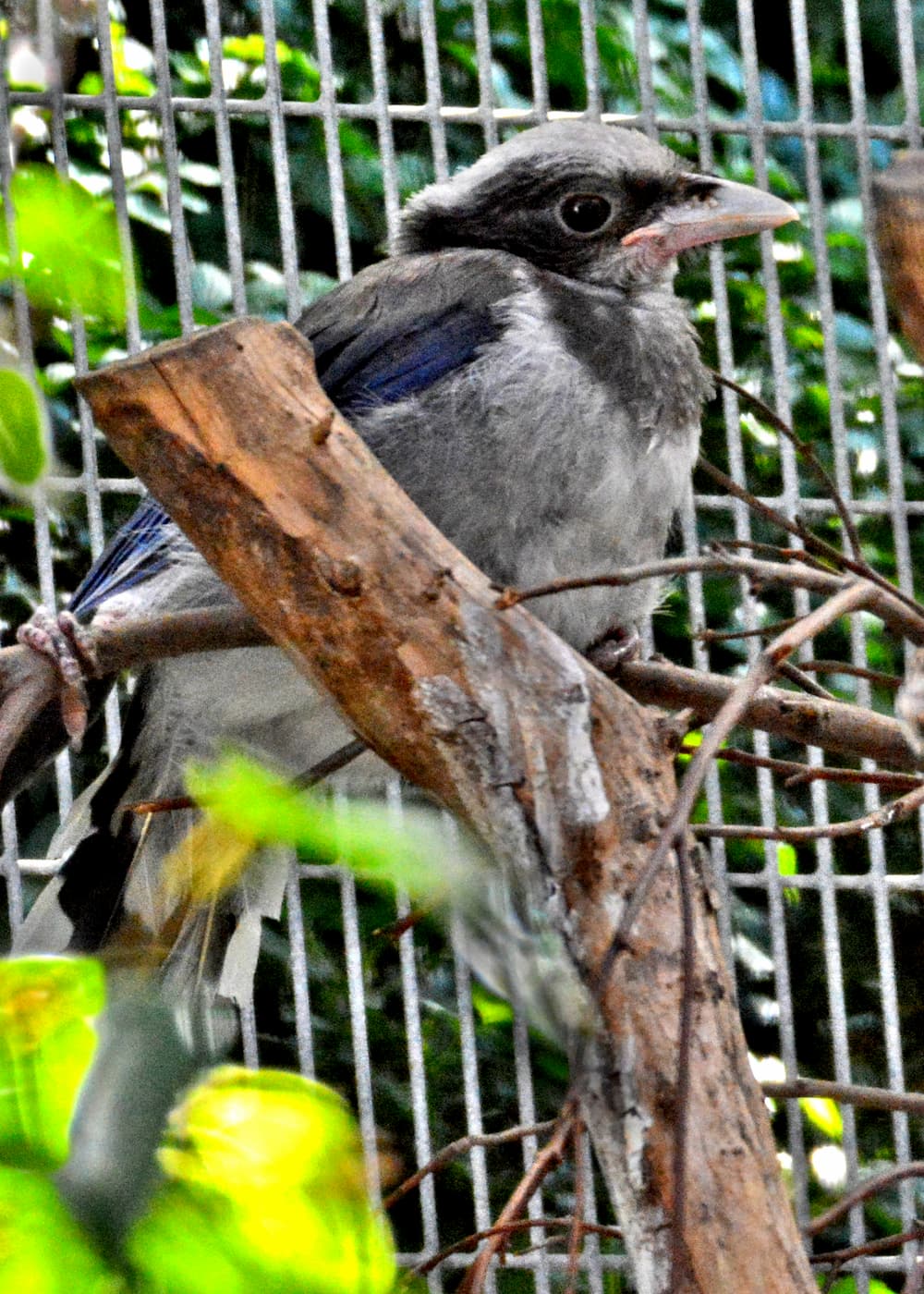 One of four red-billed blue magpie chicks pauses on a branch in the Avian Conservation Center. Photo by Tad Motoyama 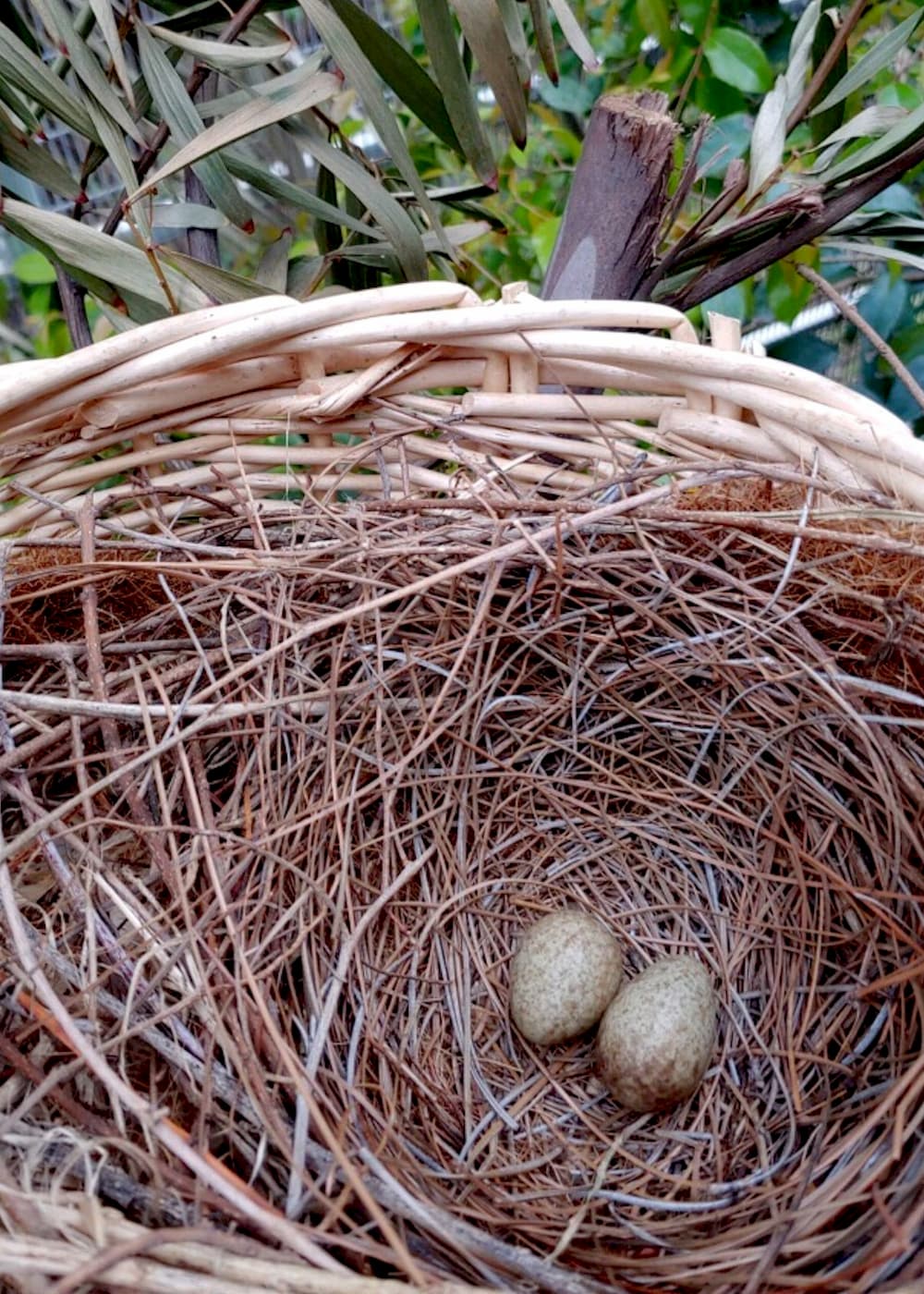 Red-billed blue magpie eggs in a nest in the Avian Conservation Center. Photo by Lori Rogalski

Three speckled mouse birds hatched. Native to sub-Saharan Africa, these gregarious little birds flock together in groups of up to 15—a behavior that gives them an advantage against predators. The six species that make up the mousebird family are survivors from the Eocene period, about 55–33 million years ago. Although once more widespread, their range is now limited entirely to the African continent. They are a unique group of birds whose closest living relatives are thought to be parrots and cockatoos. They are agile climbers and their habit of scurrying and clambering through trees searching for berries, fruits, and seeds is what earned them their common name. They have unusually flexible feet that are very strong and enable them to hang upside down from branches while feeding. Our speckled mousebirds are the largest of the six species and share a habitat with spur-winged lapwings across from Gorilla Grill. 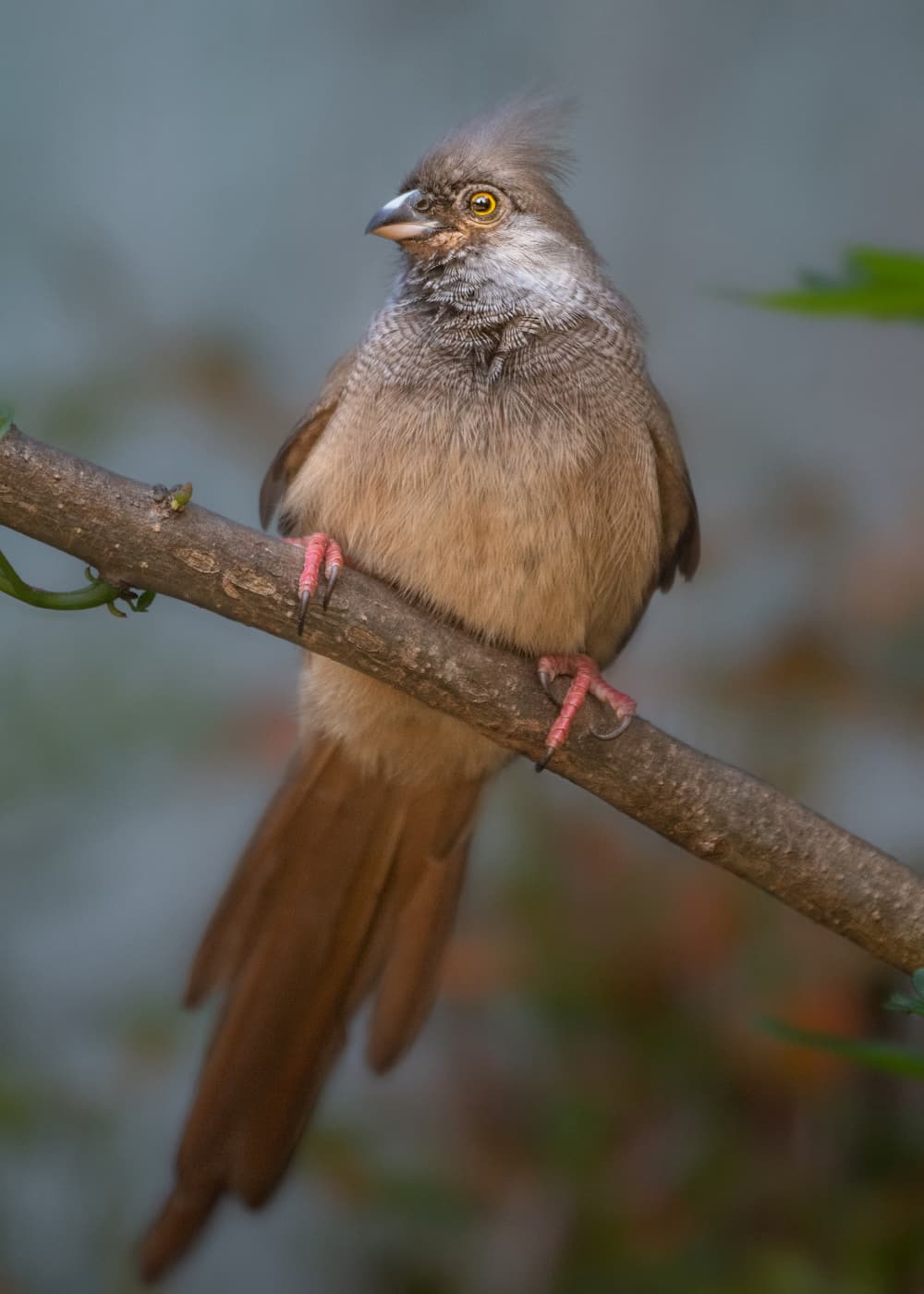 Speckled mousebirds are very social and they are adept climbers. Photo by Jamie Pham

As the egg-laying phase of the California condor breeding season draws to a close with a record 18 eggs, the attention of condor staff turns to hatching and chicks. The seventh California condor chick hatched on June 14. Although it was a good year in terms of eggs produced, only ten proved to be fertile and three did not complete development, which was unfortunate. Newly matched pairs do not always breed successfully until they have been together for a season or two and a number of difficulties can result in egg failure even for experienced parents.

On May 21, a crested capuchin monkey was born. These New World monkeys are native to South America and they are not endangered thanks to their wide distribution—though they face the same challenges as many endangered primates, notably habitat loss. When Portuguese explorers reached the Americas in the 15th century and discovered these monkeys, they were reminded of monks from the Order of Friars Minor Capuchin, an offshoot of the Franciscans, who wear brown robes with large hoods. In Italian, the word “cappuccio” and its diminutive “cappuccino” refers to a cap or hood. When the monks wore their hoods down over their shoulders, the tan and brown robes resembled the monkeys’ coloring. (The espresso drink that is familiar to many of us is also named for these the Capuchin friars: the color of the coffee topped with frothed milk is similar to the color of the Capuchin robes.) The scientific name of the genus that includes capuchins, Cebus, comes from the Greek word kêbos, which means long-tailed monkey. Capuchins do have long tails, and like most New World monkeys, those tails are prehensile, which means they can be used like an extra hand for climbing.

The Chinese giant salamander on view at the LAIR passed away on May 26. The cause of death is yet to be determined. This critically endangered species is one of the largest amphibians in the world and closely related to the Japanese giant salamander and the hellbender, native to the eastern US. Although farmed in China, where it is a luxury food item as well as a source of traditional medicinal compounds, wild populations of Chinese giant salamanders have steadily declined due to habitat loss and degradation. The species is also slow to mature and reproduce, which is a challenge to conservation efforts. “She was a big part of the LAIR” comments Curator of Reptiles and Amphibians Ian Recchio. “She will be missed both as an individual and for what she represented for the future of her species” 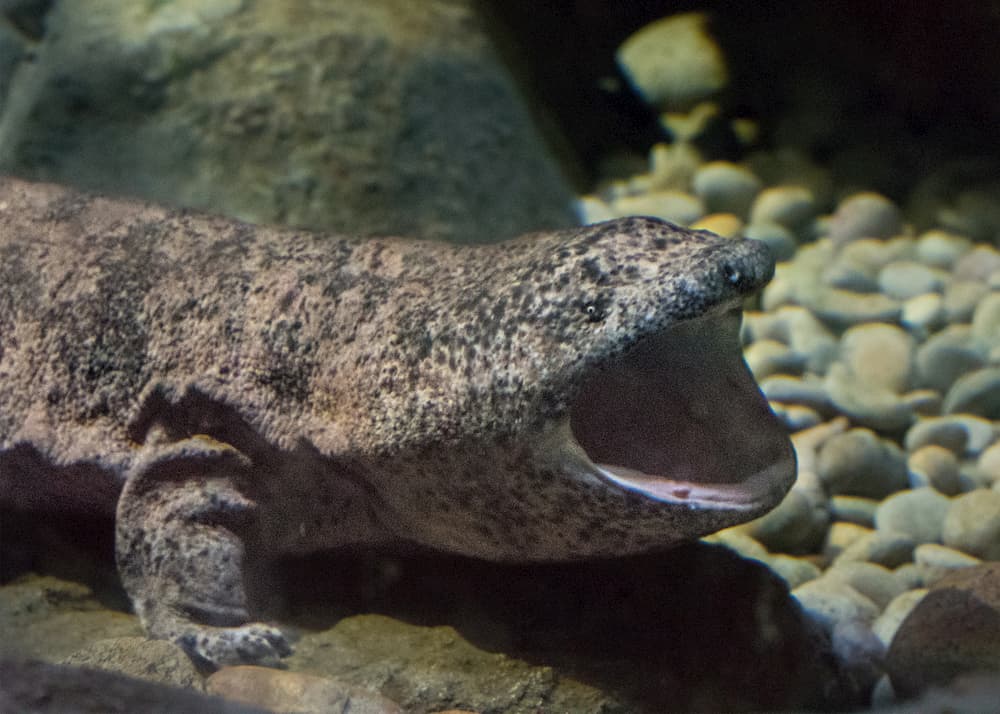 The Chinese giant salamander was a popular resident of the LAIR. Photo by Jamie Pham 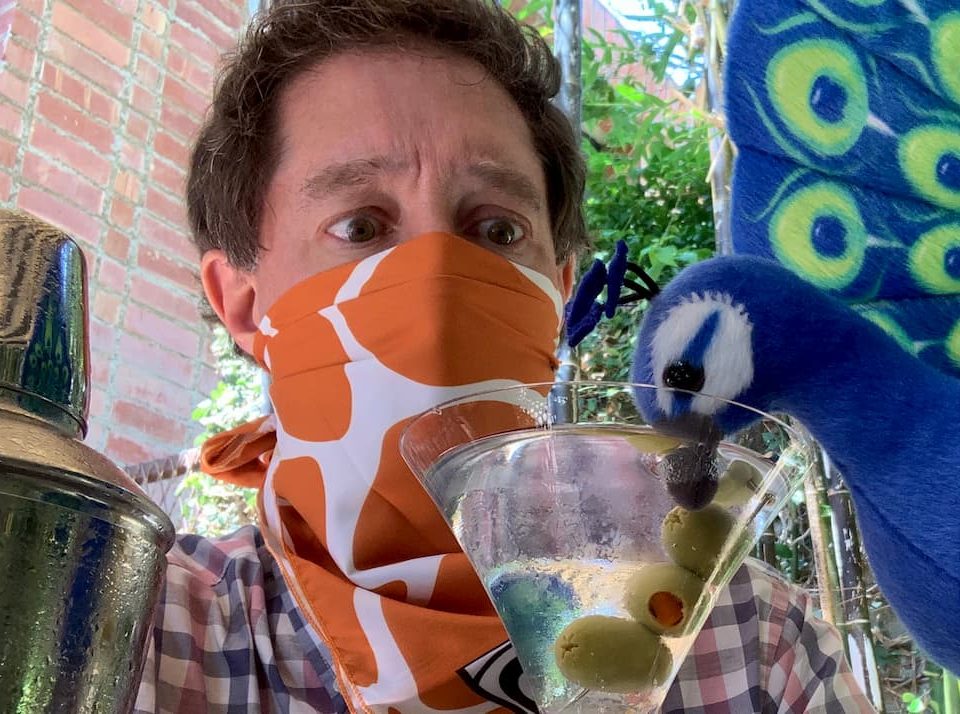 This year’s Beastly Ball was full of pleasant surprises. Photo by Tom Jacobson 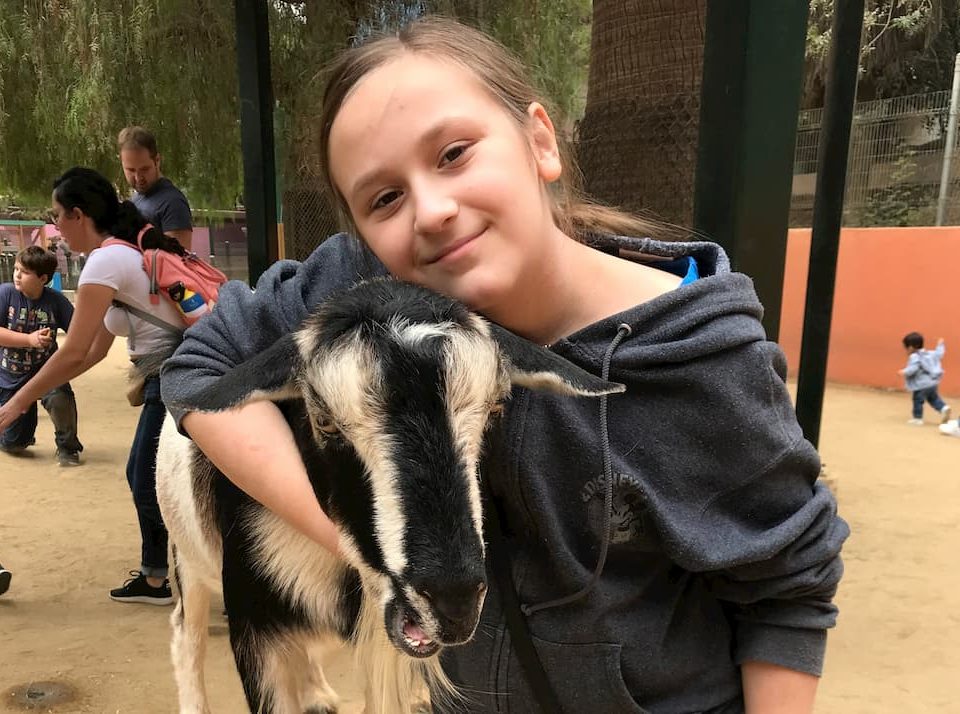 Emily Klein is an aspiring artist with a penchant for Muriel’s Ranch. Photo courtesy the Klein Family