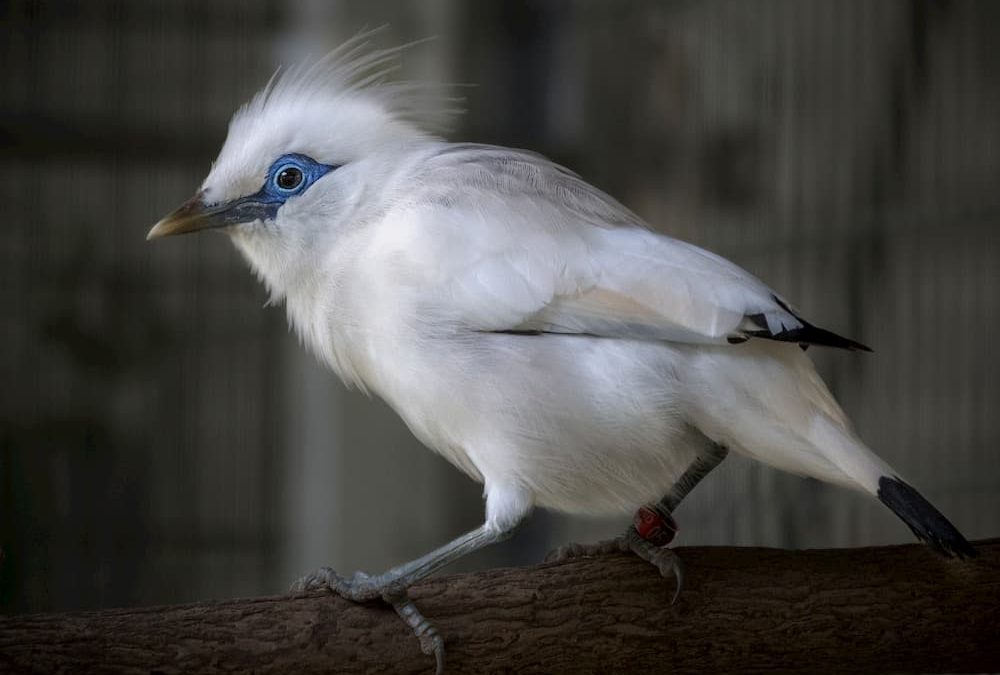 The L.A. Zoo has been participating in Bali myna conservation for about ten years. Photo by Jamie Pham

Congo peafowl numbers are declining in the wild, so maintaining a healthy population in human care is vital to protecting this species. Video by Chelsea Ross

In late July, two Congo peafowl chicks hatched in the Zoo's off-exhibit Avian Conservation Center (ACC). These relatives of the more well-known Indian peafowl (see: Kevin the Peacock) are native to the lowland forests of the Democratic Republic of Congo (DRC), where they are considered the national bird. The rough terrain in their home range makes it difficult to study them in the wild, so little is known about these birds. Although listed as Vulnerable by the International Union for the Conservation of Nature (IUCN), the population is declining due to habitat loss and poaching, so every chick hatched in human care is important.

Congo peafowl are monogamous and mated pairs often sing loud duets together. Similar to other peafowl species, males put on courtship displays with their colorful tail feathers. Peafowl are omnivorous, consuming primarily fruit and invertebrates. Parents provide their chicks with a high-protein diet of insects for the first few weeks of their lives and then begin to add fruit, veggies, and, in human care, bird kibble. The first chick hatched normally, but the second chick had some difficulties breaking out of the shell, so mother Penny and older brother Eric helped it along. The chick was still fairly weak, so Animal Care stepped in to help, tending it overnight. The next morning, the chick was returned to the family, who instantly accepted it back. 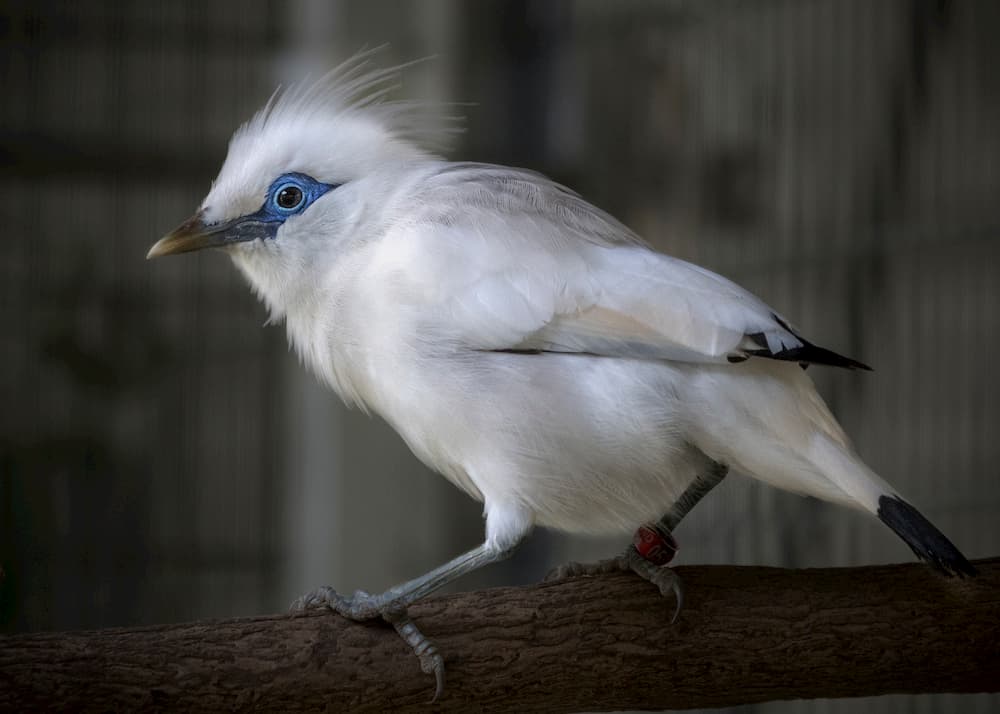 The L.A. Zoo has been participating in Bali myna conservation for about ten years. Photo by Jamie Pham

The Bali myna Species Survival Plan (SSP) recommended some pairing changes for the Zoo’s breeding group, which also resides in the ACC. A female bird from Seattle's Woodland Park Zoo arrived at the end of July, and the Zoo will be sending one bird out to another facility and receiving two more, making a group of three males and two females. The extra male is aging, so he will not be paired for breeding, but will be cared for with the others in the ACC.

In 2016, Animal Keeper Lori Rogalski traveled to Bali in order to assist with a Bali myna conservation project. She recorded these two singing at the breeding center. Video by Lori Rogalski

Also in the ACC, a red-and-yellow barbet chick hatched sometime in July. It was first seen poking its beak out of the nest box that month and by the first week in August, the youngster had fledged. This species is native to eastern Africa and lives in small groups of three to 10 birds. Barbets are named for the bristles at the bases of their stout, sharp bills. A rock dove hatched at the World of Birds Show compound and three speckled mousebirds hatched in the habitat that the flock shares with the spur-winged lapwings, next door to the weaver bird exhibit. This trio makes a total of ten chicks this year. 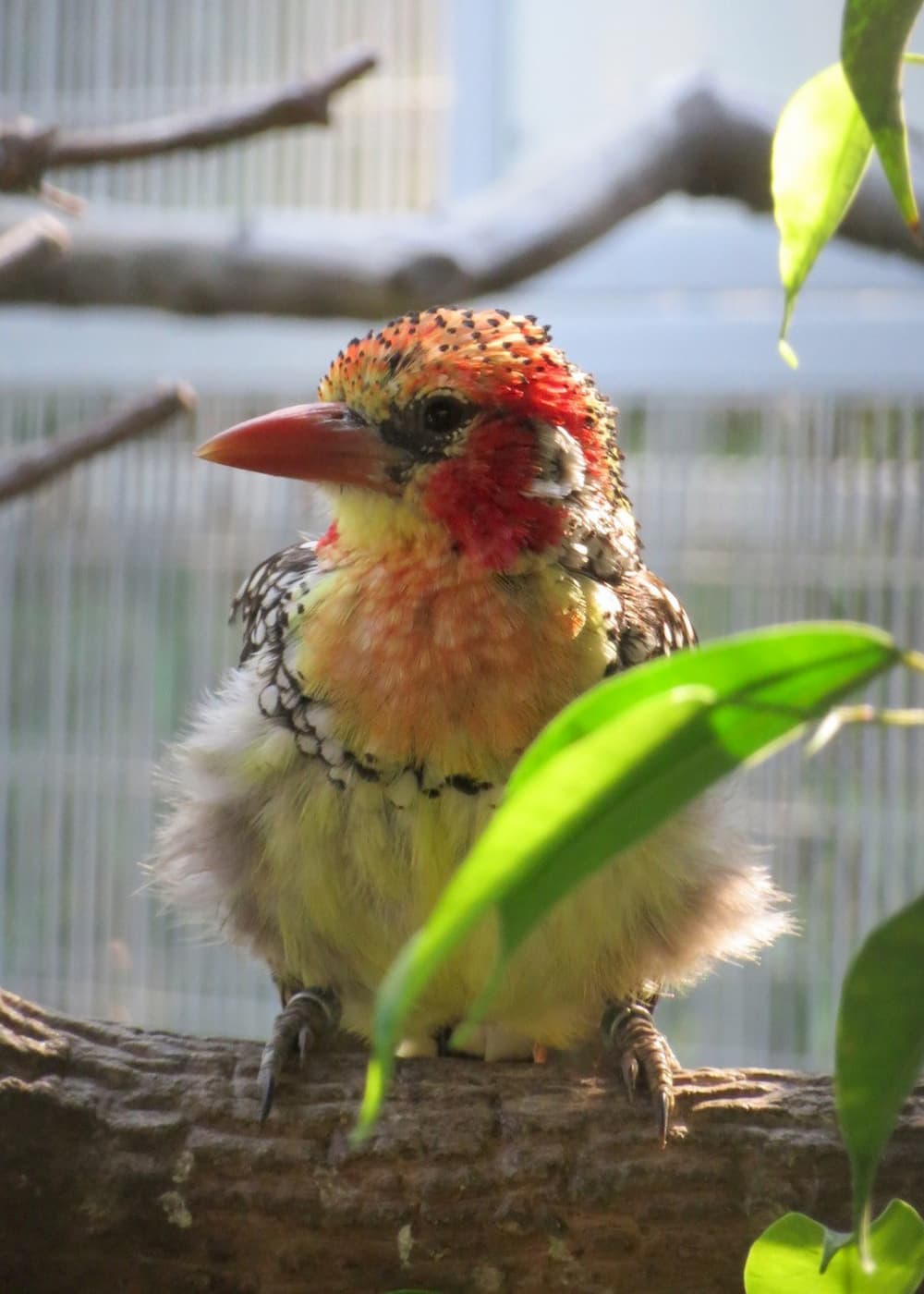 Two Santa Catalina Island rattleless rattlesnakes were born. Most rattlesnakes are born with only one rattle segment on their tails, so, although they will instinctively shake their tails when agitated, they make no sound. Like other reptiles, a snake's skin does not expand as the animal grows, so it must be periodically shed. Most lizards shed in little bits and pieces—you may notice flakes of old skin lingering here and there on our LAIR residents or lizards that you see in the wild. Snakes shed by slipping out of their old skin in much the same way as you might peel off your socks, leaving an inside-out shed behind. Rattlesnakes gain a new segment on their rattles with each shed, so baby rattlers cannot rattle until after their first shed when they have two segments to rattle together. This species, found only on a tiny island off the shore of Baja California Mexico in the Gulf of California, never develops a rattle. (Contrary to popular belief, you cannot tell the age of rattlesnakes by the number of rattles in their tails because individual snakes who have ample food resources and favorable habitat conditions may shed more than once a year and others may grow more slowly and shed less frequently. Also, rattle segments sometimes break off.) 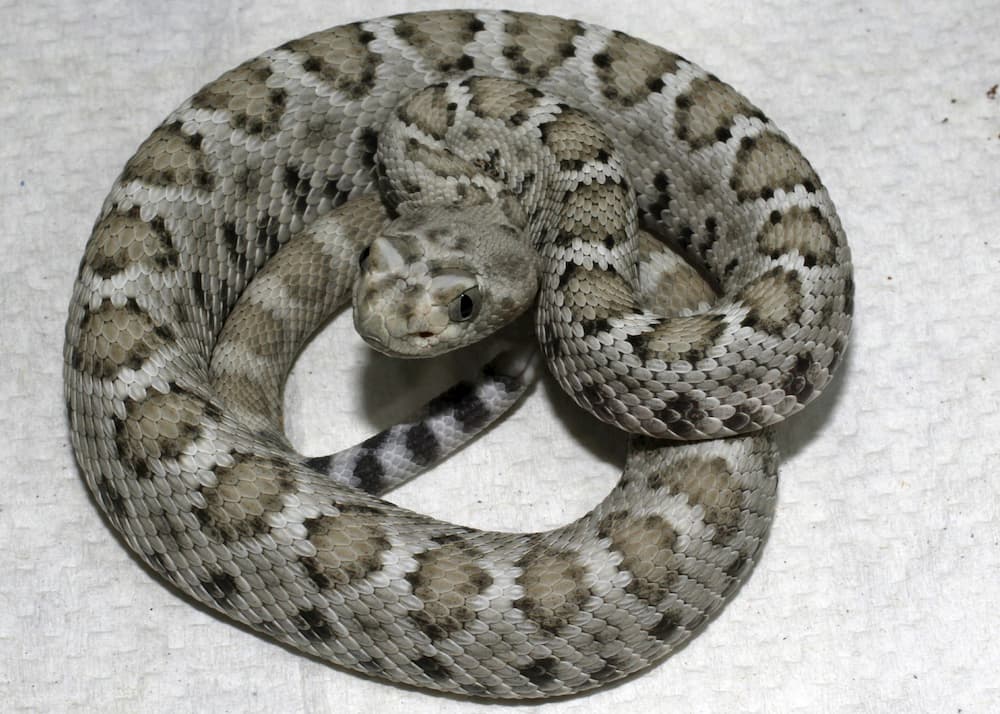 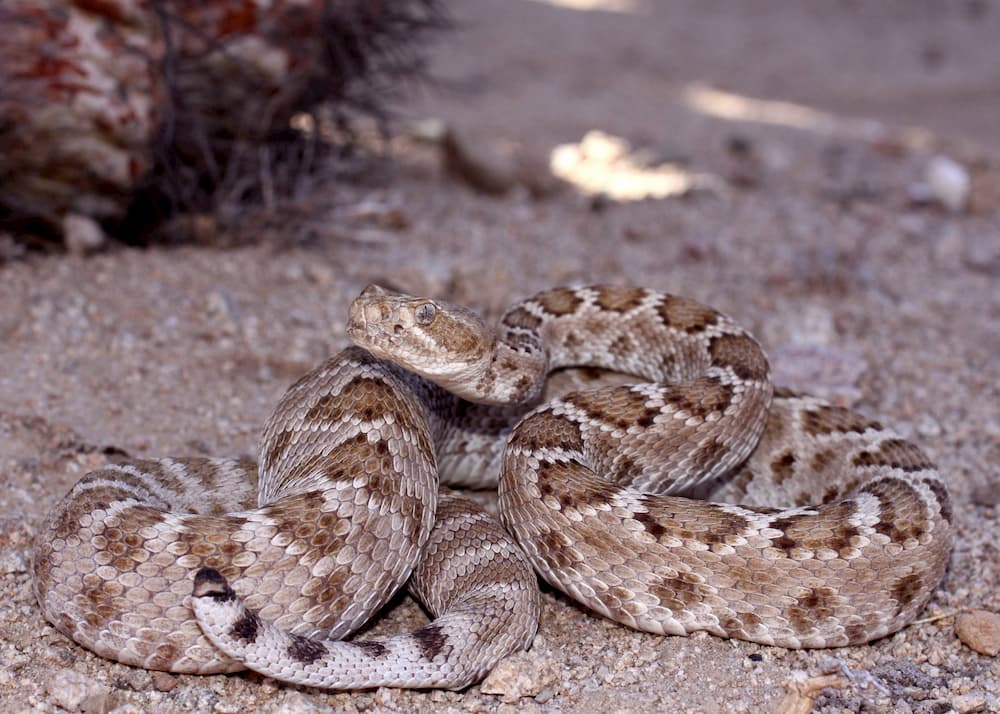 All baby rattlesnakes are born with a starter segment on their tails, but Santa Catalina Island rattlesnakes never develop additional segments. In these two photos, you can see the tail of the adult looks essentially like that of a newborn. Photos by Ian Recchio

On July 15, Zoo staff and colleagues from the California Department of Fish and Wildlife completed a mountain yellow-legged frog release in the San Gabriel Mountains. This included all of the tadpoles hatched in 2020 as well as the froglets raised from tadpoles that hatched last year from the Little Rock breeding group (about 600 individuals). On August 12, as planned, U.S. Geological Survey (USGS) biologists picked up 1,000 of the tadpoles remaining at the Zoo and released them in a remote canyon in the San Gabriel Mountains. Curator of Reptiles and Amphibians Ian Recchio commented, "This canyon had historical populations of this species, but became extinct there—until yesterday. The hike was difficult, but the release went well according to Adam Backlan, the lead USGS biologist on this excursion." About 500 tadpoles have been transferred to the Santa Ana Zoo and the roughly 500 tadpoles left will be released soon at Big Rock creek area." 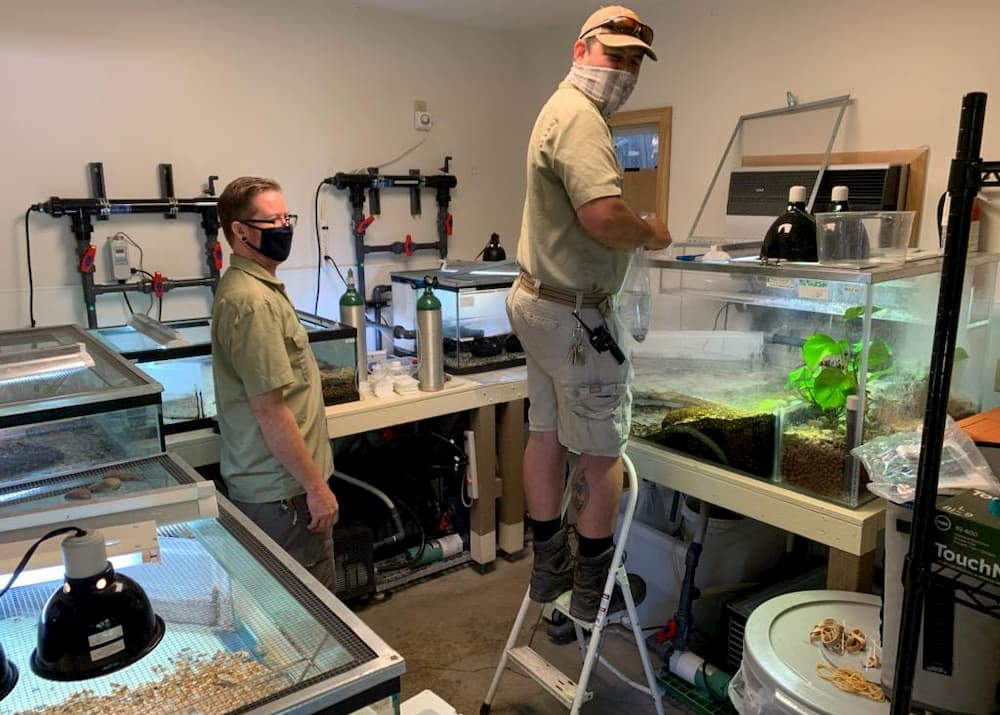 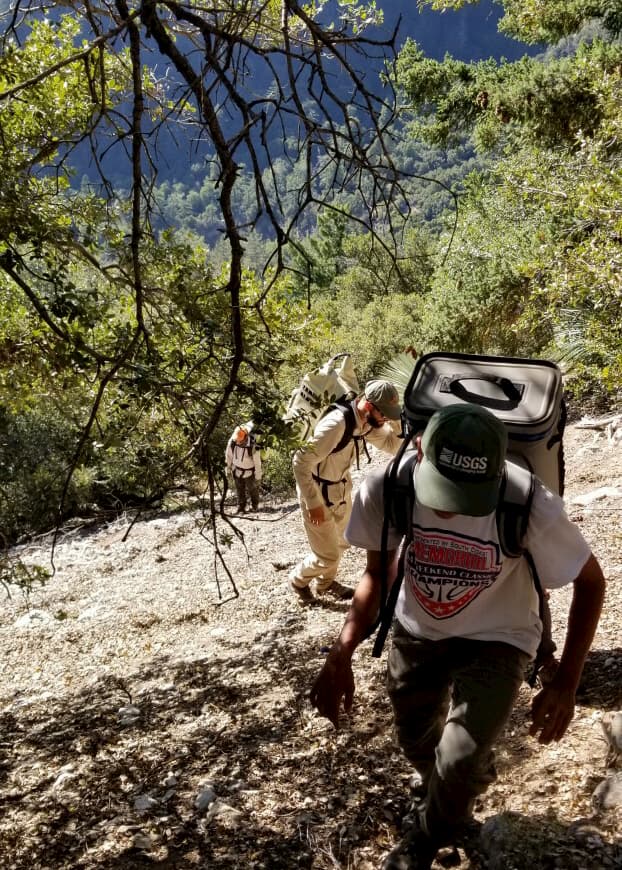 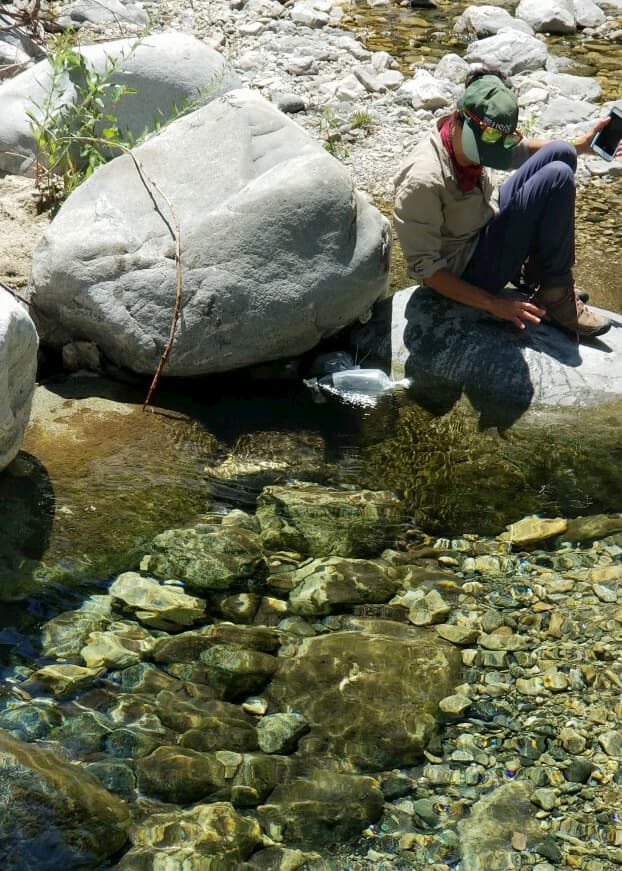 The hike to the protected release site was long and difficult. Photos courtesy of USGS

After being acclimated to the temperature of their new home, these tadpoles are released into protected habitat. Video courtesy of USGS

The circle of life can be a hard reality for those who love animals and care for them, whether they are domestic creatures that share our homes or wild species in the care of zoo professionals. On July 30, the difficult decision was made to humanely euthanize the Zoo’s African lion pair, Hubert and Kalisa. Both geriatric cats had been under careful observation and were being closely monitored by Animal Care and Animal Health staff as they began to show signs of age-related health issues. Recently, quality of life for both had diminished significantly, leading to the decision to let the two, who had been so closely bonded, go together. 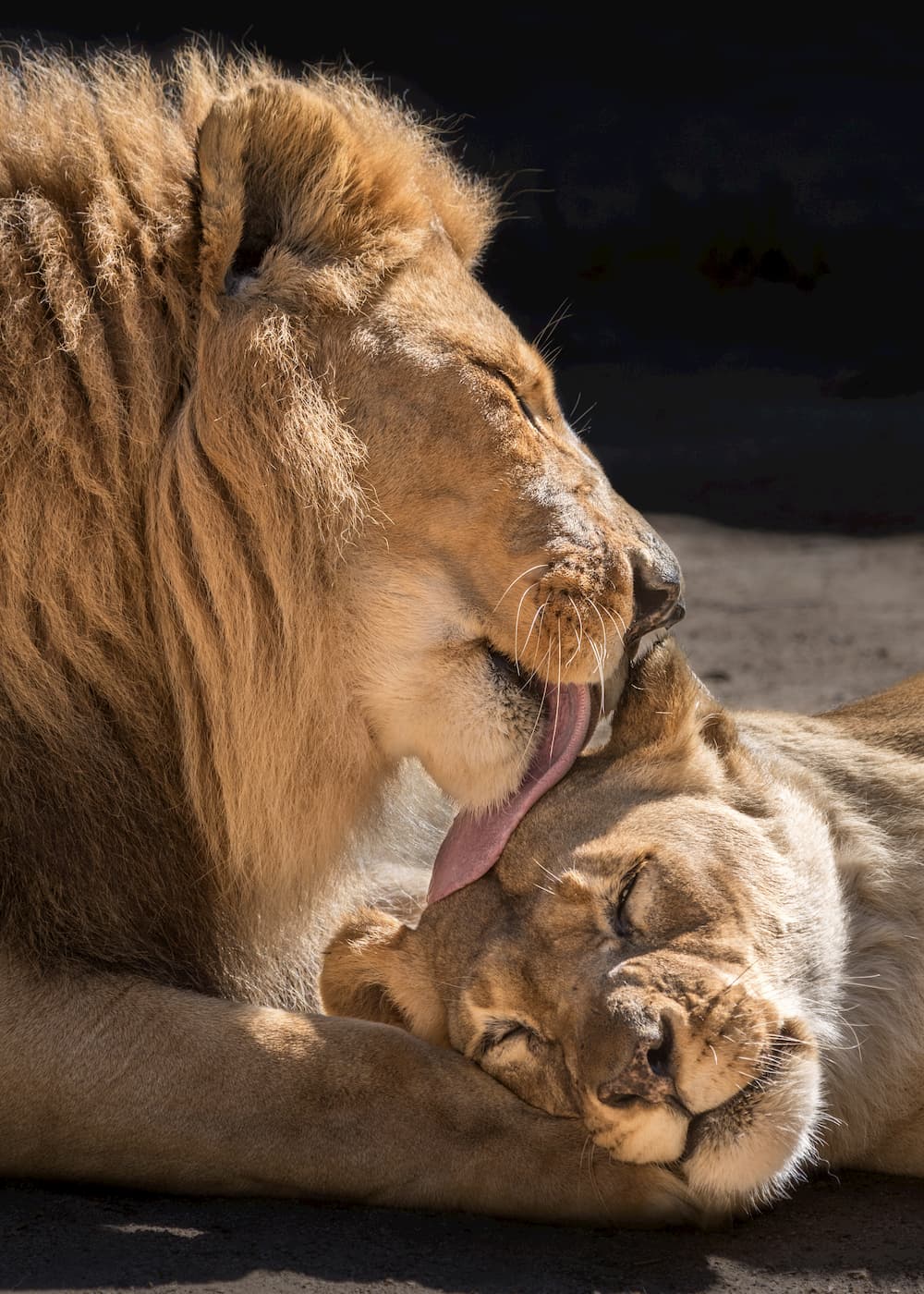 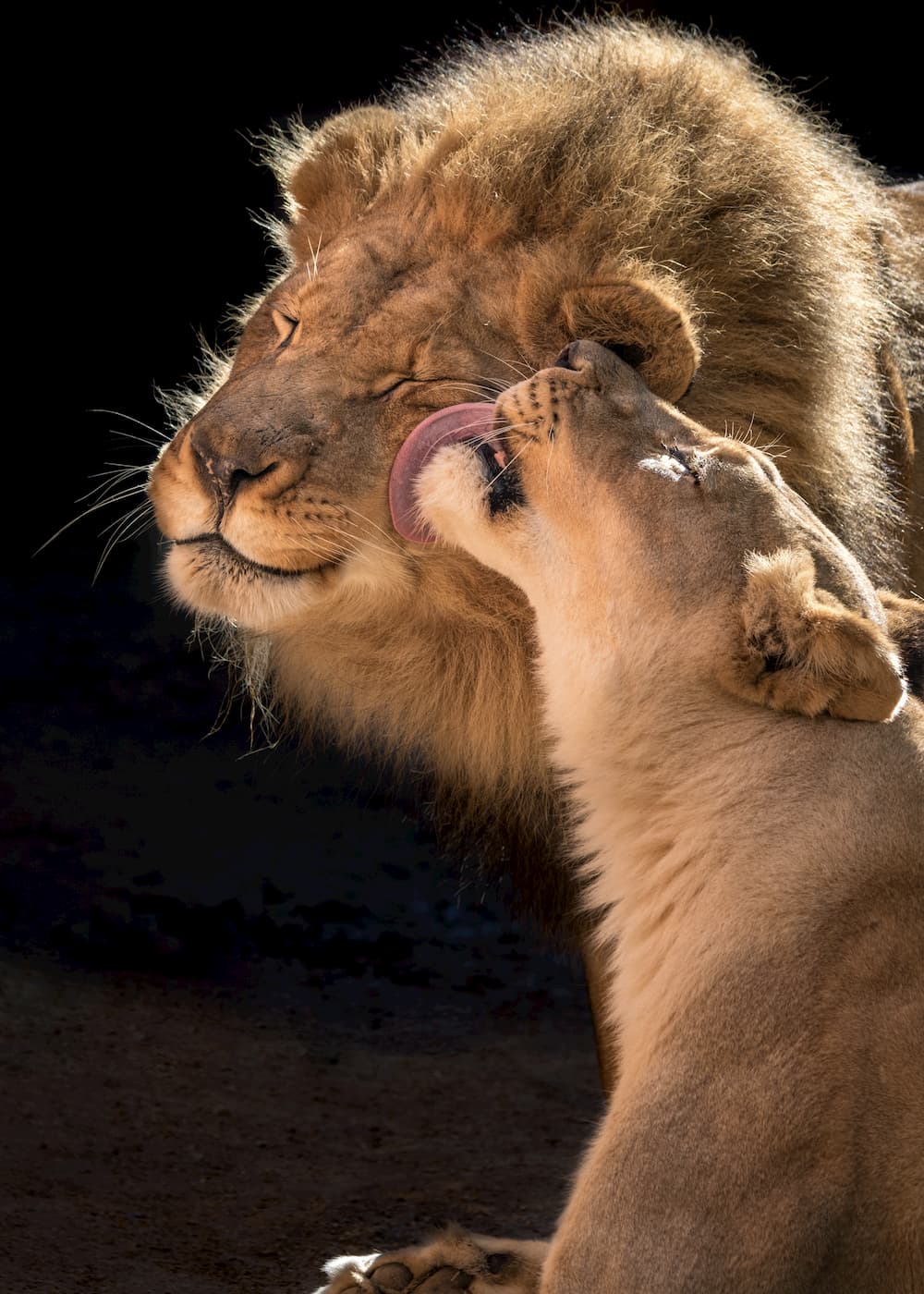 Hubert and Kalisa made their public debut at the L.A. Zoo on March 28, 2014. The two lions came from the Woodland Park Zoo (WPZ) in Seattle and were very closely bonded. Hubert was born in 1999 at Lincoln Park Zoo in Chicago and later lived at North Carolina Zoo, Knoxville Zoo, and WPZ. He fathered two litters of cubs, the second of which was born at WPZ in 2012. Kalisa’s parents were born in South Africa and transferred in 1997 to the Oklahoma City Zoo, where she was born a year later. She spent time at the Virginia Zoo in addition to WPZ and had no offspring. The arrival of Hubert and Kalisa in Los Angeles made quite a splash, even upstaging coverage of then-power couple Brad Pitt and Angelina Jolie at E! Online. Although there are no immediate plans to bring in another pair of lions, this species is definitely a part of the Zoo's future in the Africa area of the Vision Plan.

Recently, the two Cayuga ducks who were popular Animals & You ambassadors had both been experiencing a number of age-related health issues. Jeweliet’s eyesight had deteriorated over the years, but she seemed to be perfectly comfortable getting around with Gem’s guidance. However, as July progressed, his health also declined and on July 21, the difficult decision was made to euthanize the pair. Gem was 11.5 years old and Jeweliet would have turned 11 in October; the average lifespan for this domestic breed is eight to 12 years.

The original pair of Cayugas arrived in summer 2009, but their residency took an unexpected turn when the female, Jewel, died suddenly that October. She had, however, been laying eggs. Since there were no plans to breed the pair, the eggs had been stored in a refrigerator. After the loss of the female duck, Animal Care staff decided to try incubating the eggs for a few days, and when they were candled, two were discovered to be fertile. After a week or so, only one remained viable and a team effort was made to care for and monitor the egg. On October 14, it pipped. Keepers fashioned a surrogate “mother” out of an ostrich feather duster, hanging it under a heat lamp in the nursery crib. After a while, Gem was allowed supervised visits with the chick. The two became great companions and often made a splash with guests in the Winnick Family Children's Zoo. 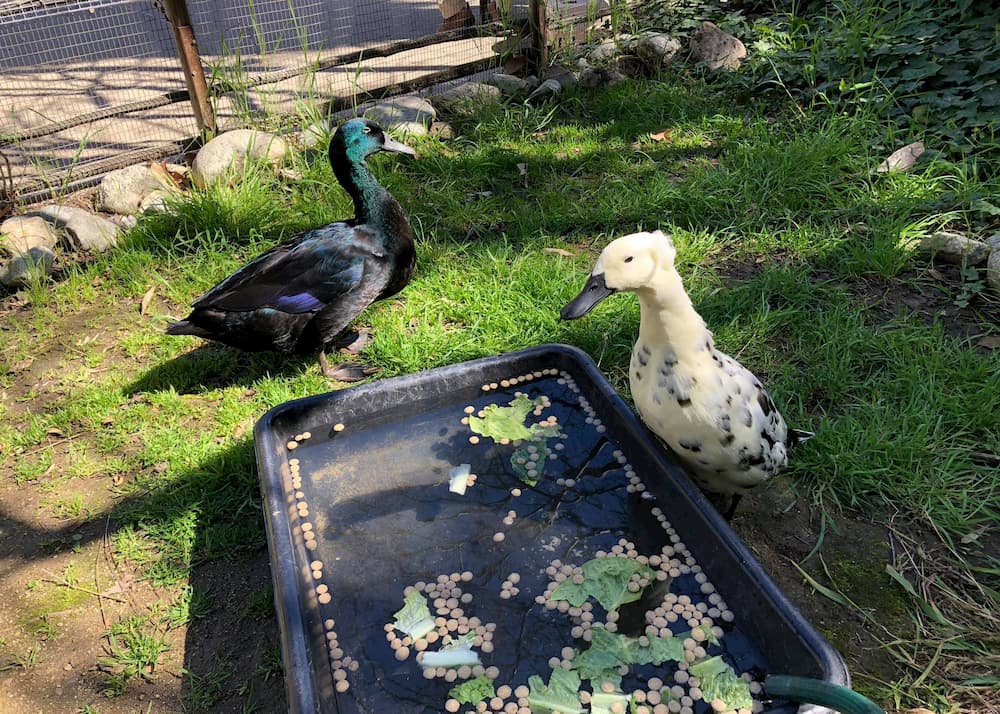 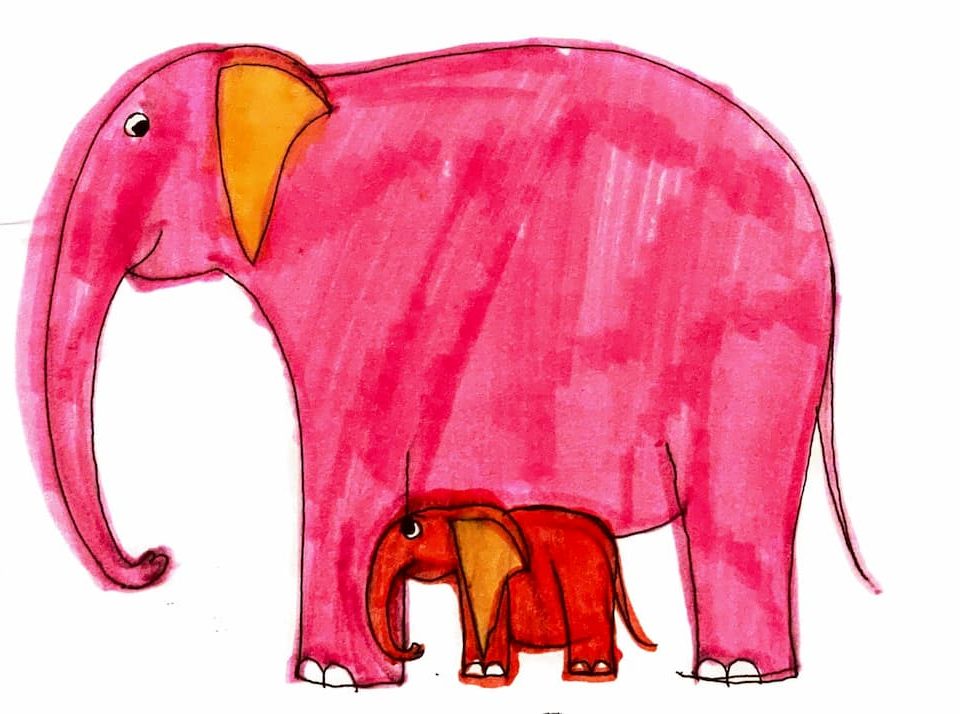 GLAZA member Sydney Lopez sent a wonderful letter describing how much the Zoo means to her family, especially her autistic brother, who enjoys expressing himself through animal inspired artwork. Original artwork by Jesse Lopez courtesy of Sydney Lopez 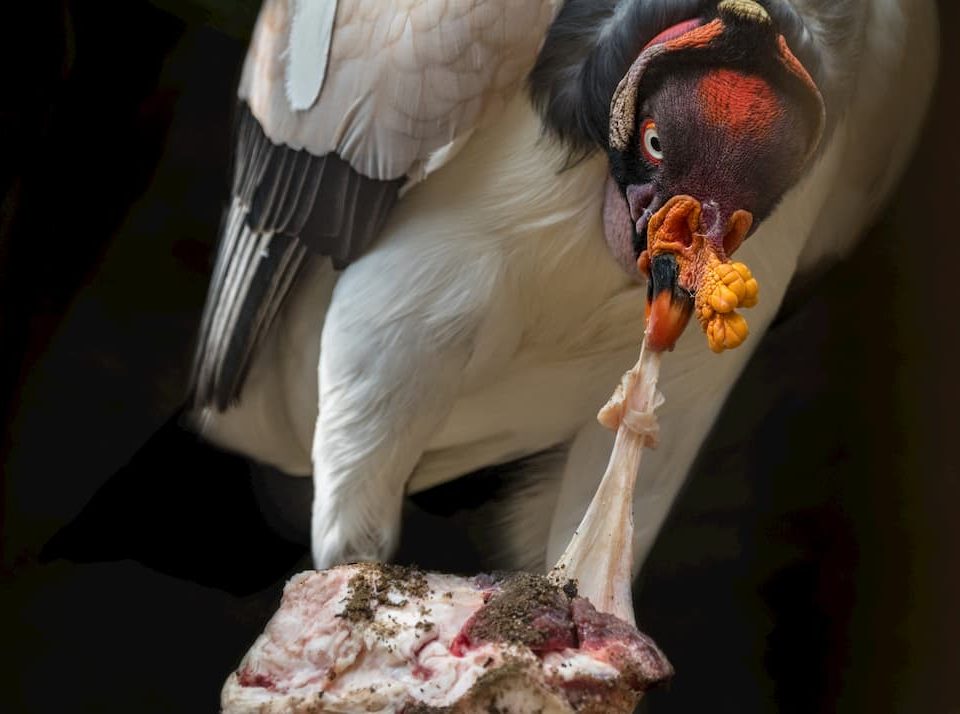 Vultures have many unique adaptations that enable them to survive on carrion. Photo by Jamie Pham