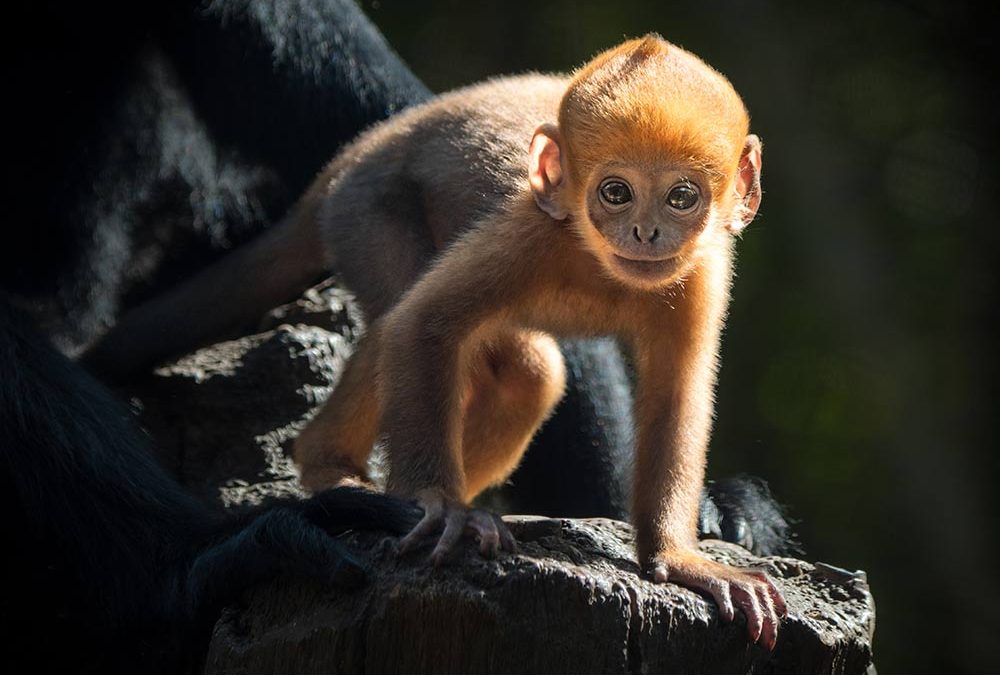 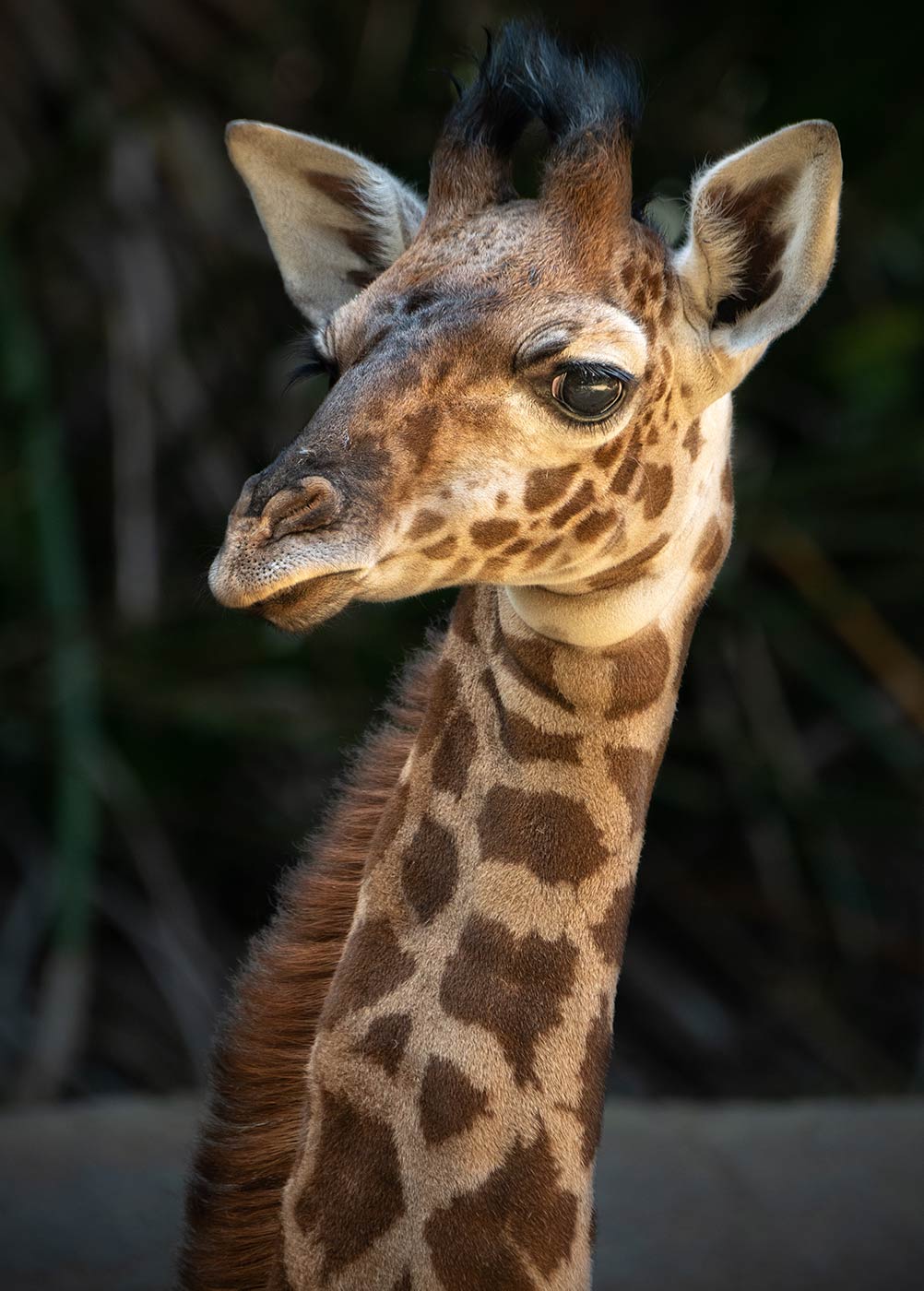 The most recent Masai giraffe calf born at the Zoo weighed 155 pounds and stood over six feet tall. Photo by Jamie Pham

A male Masai giraffe was born on September 26 to parents Zainabu and Phillip—the 38th at the L.A. Zoo. Like all giraffes, this calf was born with horn-like ossicones, which lay flat on the head during birth and pop up around one week later. "This calf has been very inquisitive about the new world around him," says Animal Keeper Mike Bona. "It's fun watching him explore and build relationships with the other herd members." Giraffes populations across Africa are estimated to number just over 100,000 individuals. Populations of all four giraffe species combined have declined by 40 percent over the past 30 years, and Masai giraffe populations have declined by 50 percent within that same time period. Masai giraffes were classified as Endangered by the IUCN in 2019, which makes every birth important to preserving this iconic animal from extinction. 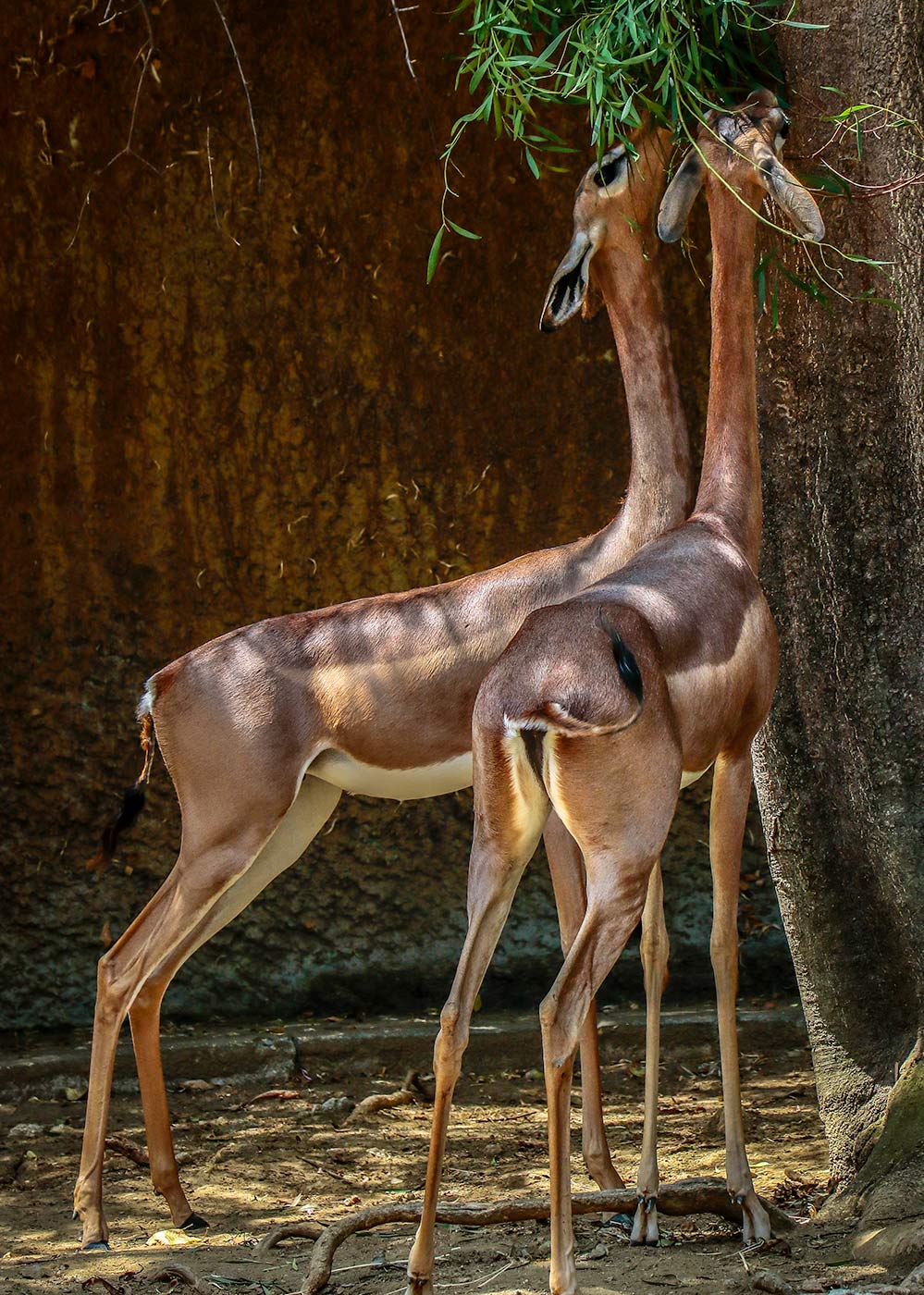 Though unrelated, gerenuk, like giraffes, use their long necks to reach desirable leaves. Photo by Michael Elliott

On September 14, a female gerenuk was born. The word "gerenuk" comes from the Somali word "gáránúug," which means "giraffe-necked." These sleek animals are also known as giraffe gazelles in English. But appearances can be deceiving. Despite this common feature, which enables both species to reach the browse that they feed on, they are not related. The closest living relative of the giraffe is the okapi, and gerenuk are monotypic, meaning the only species in their genus. 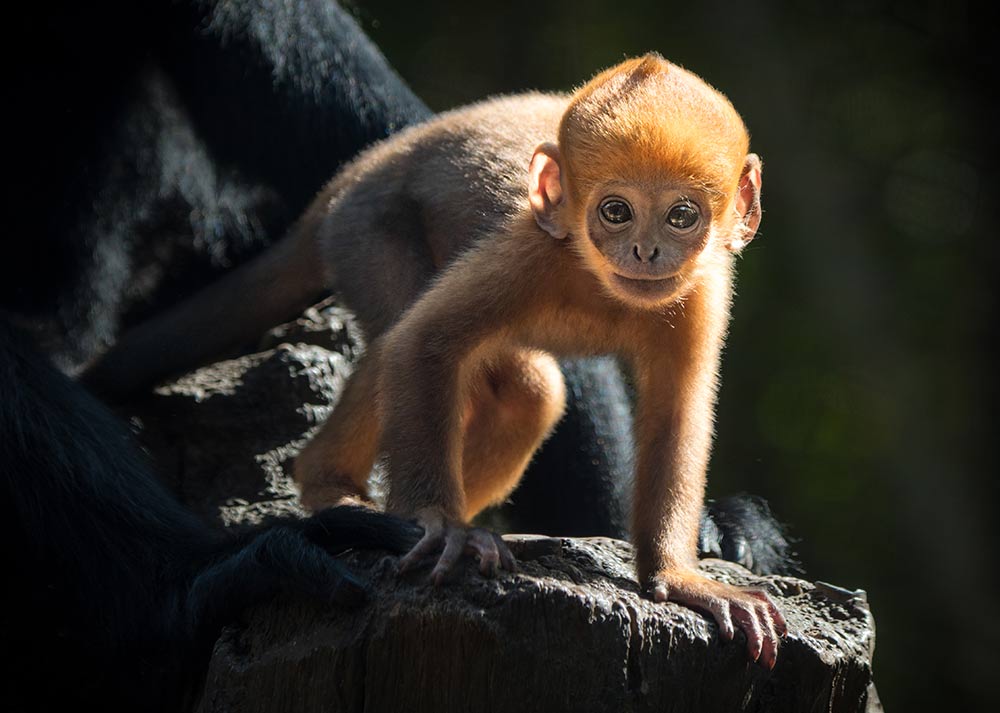 A male François' langur was born on September 10. His arrival is significant not only for this Endangered species, but also for animal care staff. "This birth has a lot of meaning for me personally and professionally," comments Animal Keeper Stephanie Zielinski. "This is the last son born to our founder male Paak. I observed Paak protect and watch over his family for 10 years before he passed away earlier this year from natural causes. This species is extremely vulnerable to extinction in the wild, so every birth is a huge success for their conservation."

Twin white-fronted marmosets were born on September 4. Marmosets are unusual primates in that females almost always have two offspring at a time that develop from two eggs, which results in fraternal rather than identical twins. But this twinning is even more unusual because each infant carries DNA from the other twin. During development, the placentas from the twins fuse so that the two individuals share a network of blood vessels. Animals and plants that carry DNA from a different individual are known as chimeras. (Named for a mythical creature made up of body parts from a lion, a goat, and a snake.) Researchers discovered this anomaly when results from paternity tests administered to a marmoset colony at the University of Nebraska, Omaha, proved to be very strange. The tests used hair samples and revealed that some individuals carried DNA not from their fathers, but from their uncles.

A speckled mousebird hatched on September 8 and a Ross's turaco hatched on the 19th. Both mousebirds and turacos belong to bird families that are found only in Africa.

A new male Bali mynah arrived from Brooklyn's Prospect Park Zoo on September 10, part of a breeding recommendation from the Species Survival Plan. A female bird from Seattle's Woodland Park Zoo arrived at the end of July, and the Zoo should receive one more Bali mynah, making a group of two males and two females. The other male is elderly, so although he will not be paired for breeding, he will remain with the others in the Avian Conservation Center. 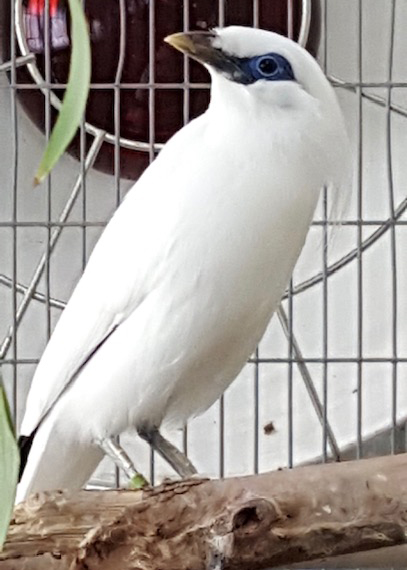 The newest male Bali mynah was rescued from a smuggling attempt at an East Coast airport. Photo by Monica Van Duzer 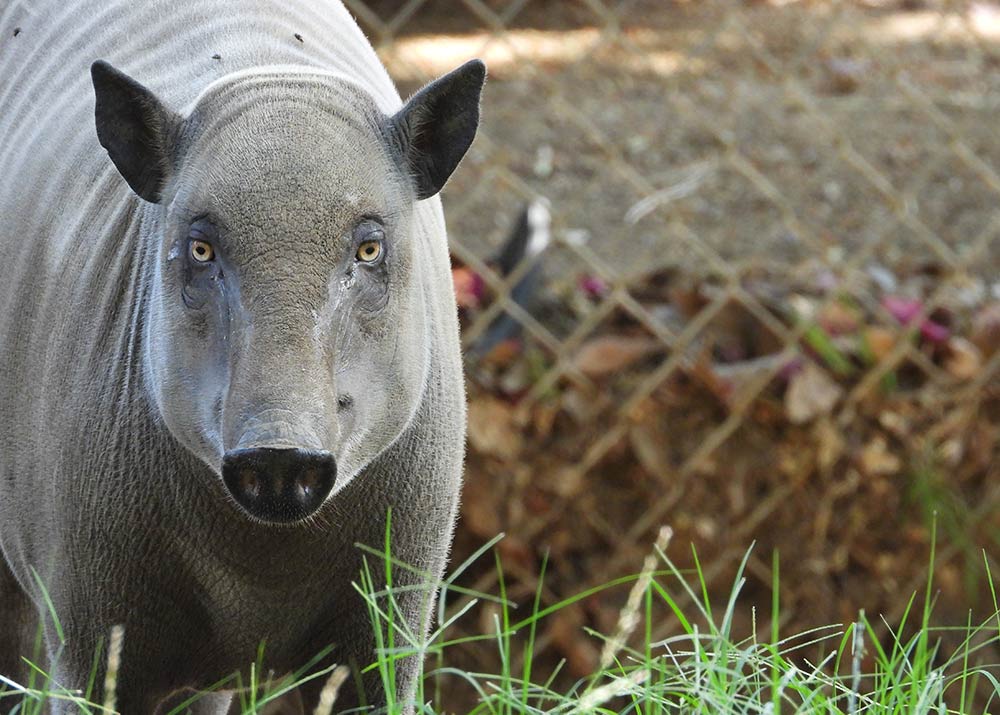 Female babirusas are as unusual looking as the males, though they do not grow tusks. Photo by Robin Savoian 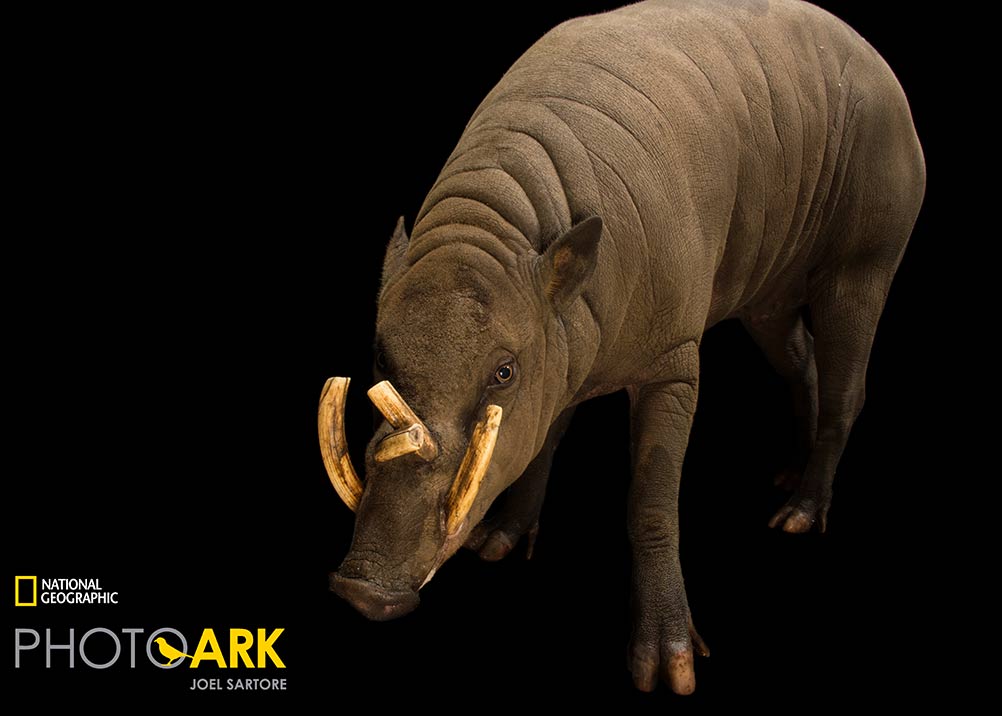 A new male Sulawesi babirusa arrived from the White Oak Conservation Center in Yulee, Florida. The L.A. Zoo participates in the Species Survival Plan for this species and this was a breeding recommendation. (The previous male passed away last year.) The babirusa is one of the most unusual members of the pig family, Suidae. Found only on a few islands in Indonesia, these long-legged, nearly hairless suids are locally known as "deer-pigs." Male babirusas' most distinguishing feature is their unusual tusks, which continue to grow throughout their lives and can reach up to 17 inches in length. These upper canines begin growing in a downward pointing position but as the boar matures, begin rotating until they point upward and eventually grow through the roof of the mouth. The purpose of these unusual tusks remains something of a mystery. One theory is that they are used when males spar with one another over territory and females, however, observations of this behavior have revealed that rather than using their tusks to fight, the boars rear up and grapple with their front legs and hooves. Another explanation is that they serve a display purpose to impress females, as has been shown with manes on male lions and extreme male plumage in some bird species.

In September, USFWS transferred two California condors to the Zoo—#1033, the chick rescued from the Dolan Fire, and a four-year-old female who was in need of treatment for lead toxicity, but ultimately did not survive. 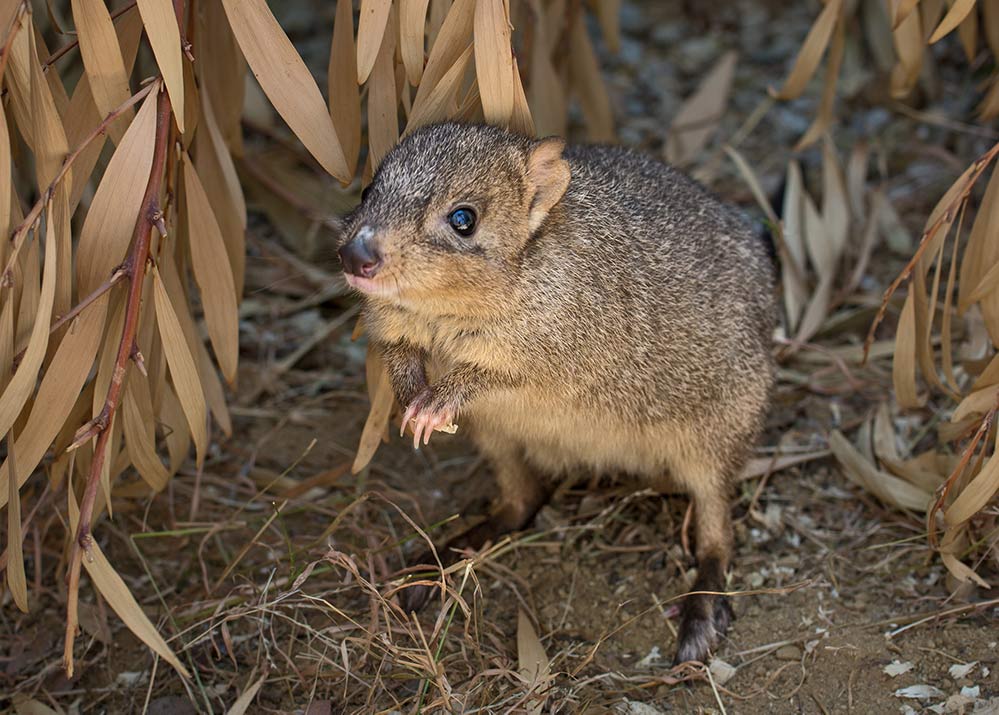 On October 24, a pair of buff-cheeked gibbons arrived—just in time for World Gibbon Day. “They are doing great!” says Animal Keeper Nicole Miller. “The female is much smaller than our other gibbons and is very good at foraging for snacks on branches. The male is busy keeping his eye on the female and finding the best places in their habitat to hang out. They sing every day and are even inspiring their neighbor gibbons, Alex and Elwood, to join them in calling.” All species of gibbons live in rainforests and jungles across southeast Asia. They play an important role in the forest ecosystem by dispersing seeds from the fruit they eat. 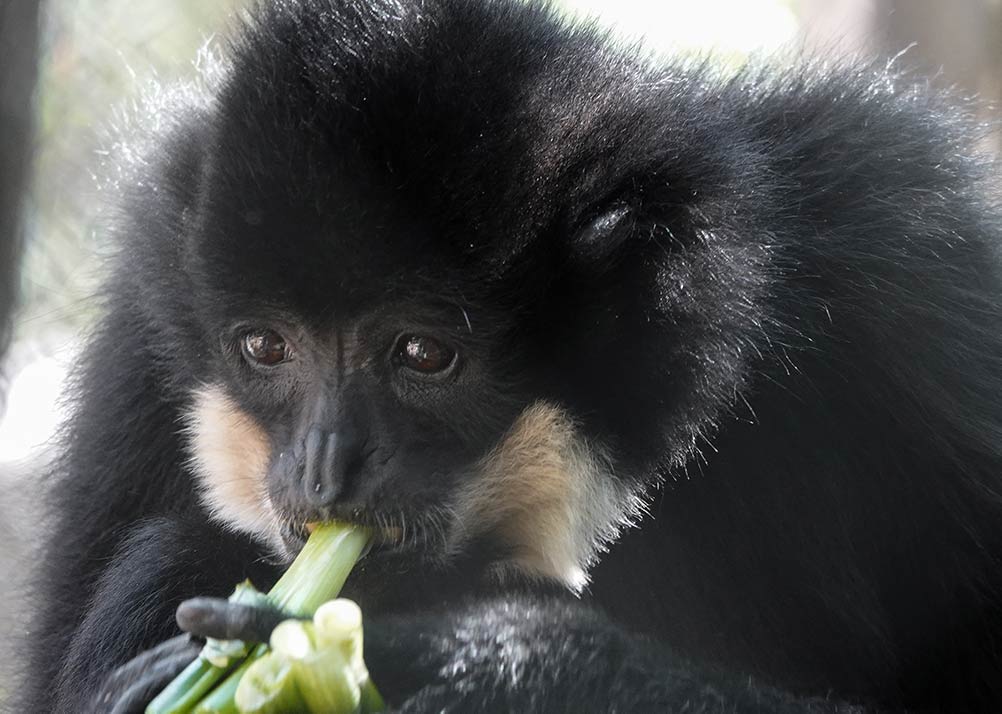 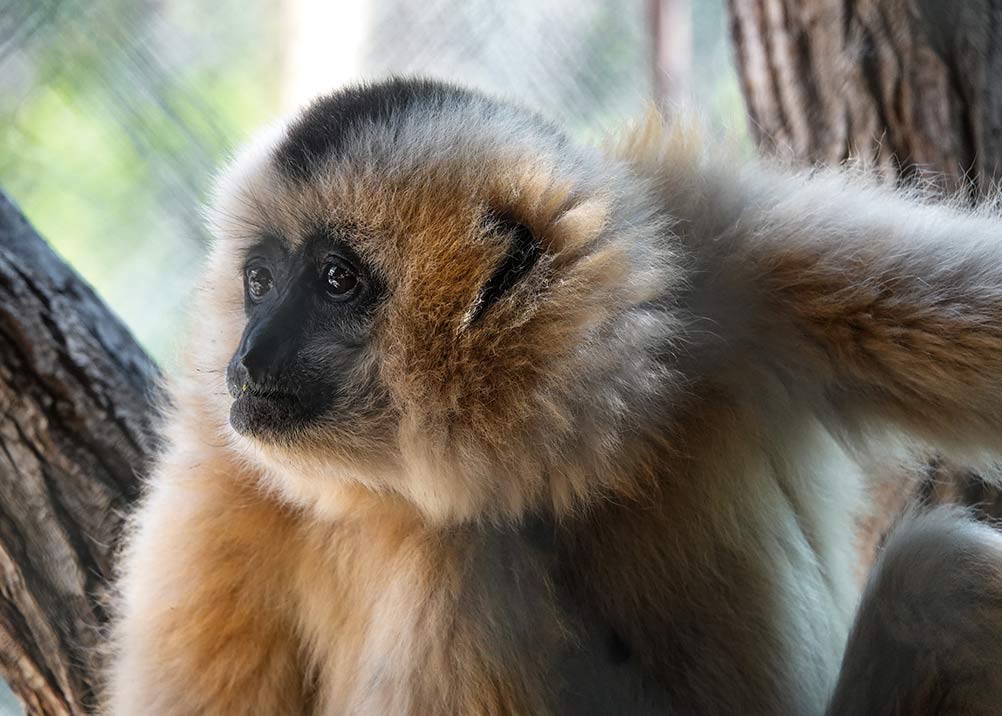 A pair of buff-cheeked gibbons are settling into their habitat at the Zoo. Photos by Lori Conley 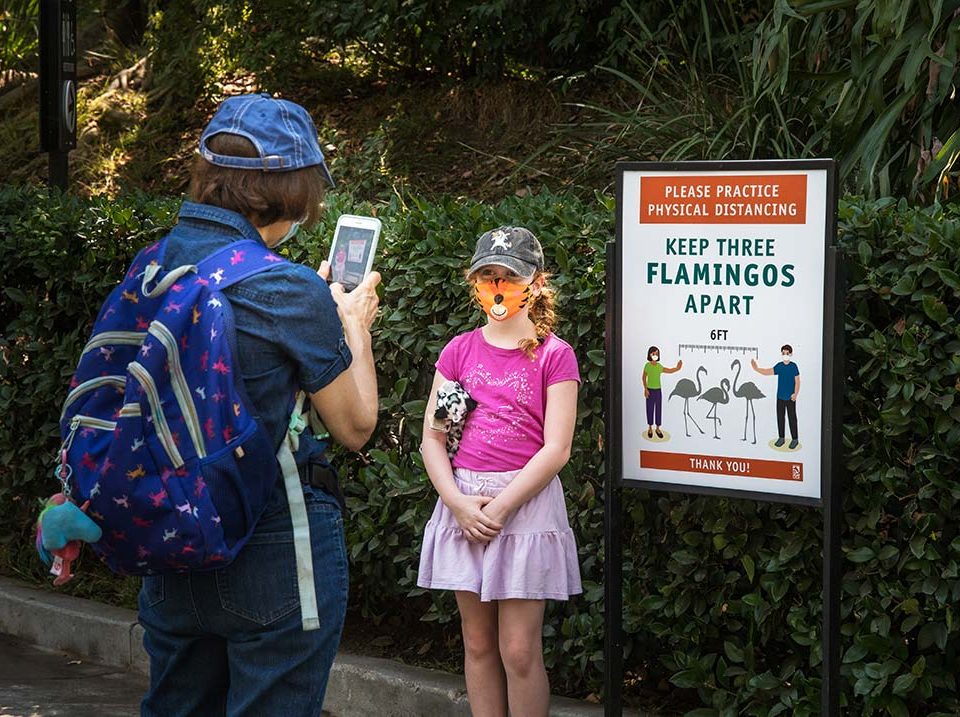 Your compliance with health and safety requirements is greatly appreciated! Photo by Jamie Pham 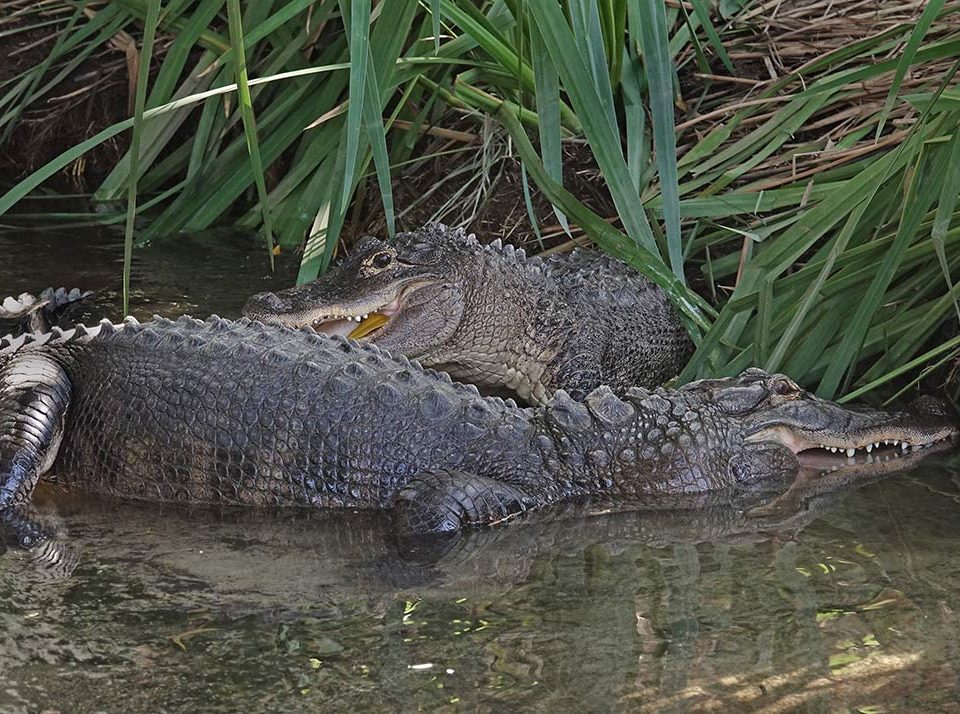 Our climate is suitable for Reggie and Tina to brumate in their habitat. Photo by Tad Motoyama