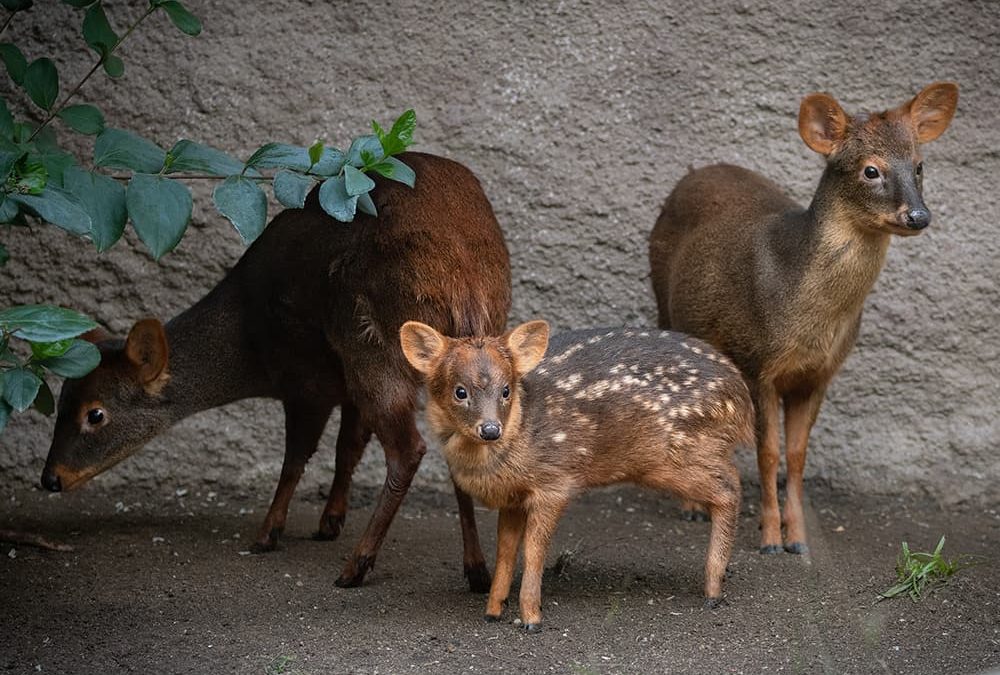 Pudú fawns are born with spots that help them blend in with dappled foliage and avoid attracting the attention of predators. Photo by Jamie Pham

A male southern pudú (Pudu puda) was born on October 30 to parents Simone and Panda. Two species make up the genus Pudu, the world's smallest deer. The origin of the name “pudú” (“small deer”) is Mapudugun, the language of the indigenous Mapuche people of central Chile and southwestern Argentina. Northern pudú are found in Venezuela, Colombia, Ecuador, and Peru; the southern pudú in southern Chile and southwestern Argentina.

When field biologists from the U.S. Geological Survey discovered that mountain yellow-legged frogs (Rana muscosa) that had survived the Bobcat fire in the San Gabriel Mountains, it was great news—initially. The trouble with burn areas is that they are prone to heavy erosion once winter rains arrive. With no plant life to anchor the landscape, topsoil and other debris washes into waterways, suffocating fish and amphibians. So, at the end of October, field biologists from the U.S. Geological Survey transferred some of the survivors to another location in the San Gabriel Mountains and sent a second group of about 50 frogs to the L.A. Zoo. These individuals will eventually be introduced into the Zoo's Little Rock Canyon breeding program to help diversify its gene pool. 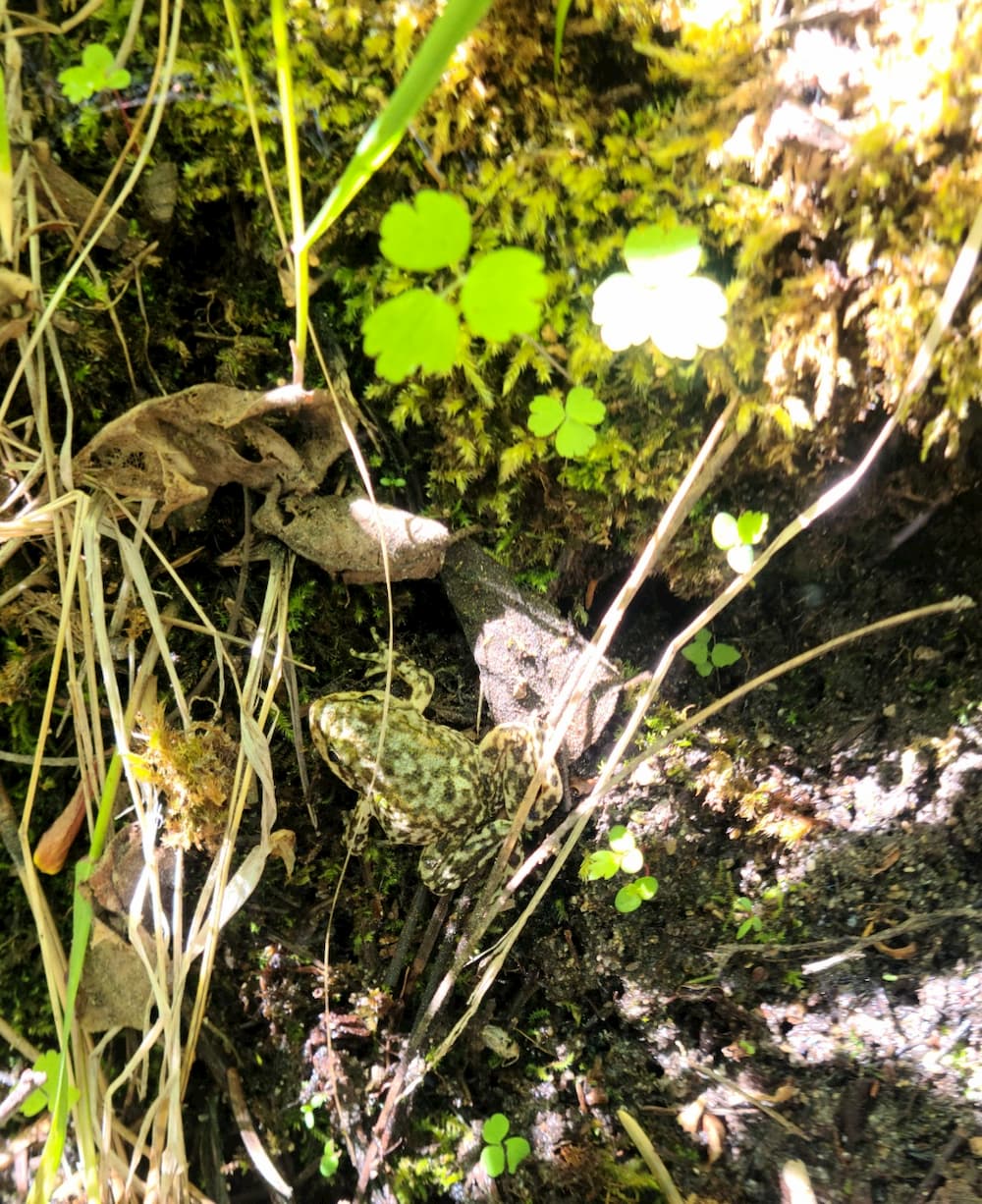 One of the mountain yellow-legged frogs rescued from a burn area and transferred to safe habitat. Photo courtesy of the U.S. Geological Survey

A female Speke's gazelle (Gazella spekei) was born on October 12. The smallest gazelle species, they are found in stony brush, grass steppes, and semideserts in Ethiopia and Somalia. The strange nose of a Speke’s gazelle has three to five folds of skin on it. When the animal is alarmed, it inflates these pleats to sound a warning to the herd. The inflated pouch acts as an amplifier that makes the alarm call as loud as a pistol shot.

The Speke's gazelle's distinctive communication adaptation is as plain as the nose on this adult's face. In this video, Marigold, who was born in February gives her nose a test run. Video by Megan Holmstedt

A new pair of pygmy falcons (Polihierax semitorquatus) arrived from Cincinnati Zoo and the single male has been transferred to the San Diego Zoo Safari Park. A female sunbittern (Eurypyga helias) arrived from Buffalo Zoo to be paired with the male in the marsh bird habitat. Sunbitterns are native South America and are closely related to great egrets (Ardea alba) and great blue herons (Ardea herodias), both of which are common in Southern California. Research Assistant Peggy Wu captured some images of the great blue heron known as Pickles who frequents the water features in Elephants of Asia.

Pickles the great blue heron prowls the perimeter of a pool in Elephants of Asia. Video by Peggy Wu

A female black-necked stilt (Himantopus mexicanus) arrived from Milwaukee Zoo. These aquatic birds can be found in shallow wetlands from the western US through Central America and into parts of South America. Living up to their name, these birds have long, thin legs and use them to wade through water in search of food that they grasp with bills that are also long and thin. They will sometimes herd groups of fish into shallow water to make catching them easier. At the Zoo, these birds share a habitat in the North America section of the Zoo with scarlet ibis (Eudocimus ruber). 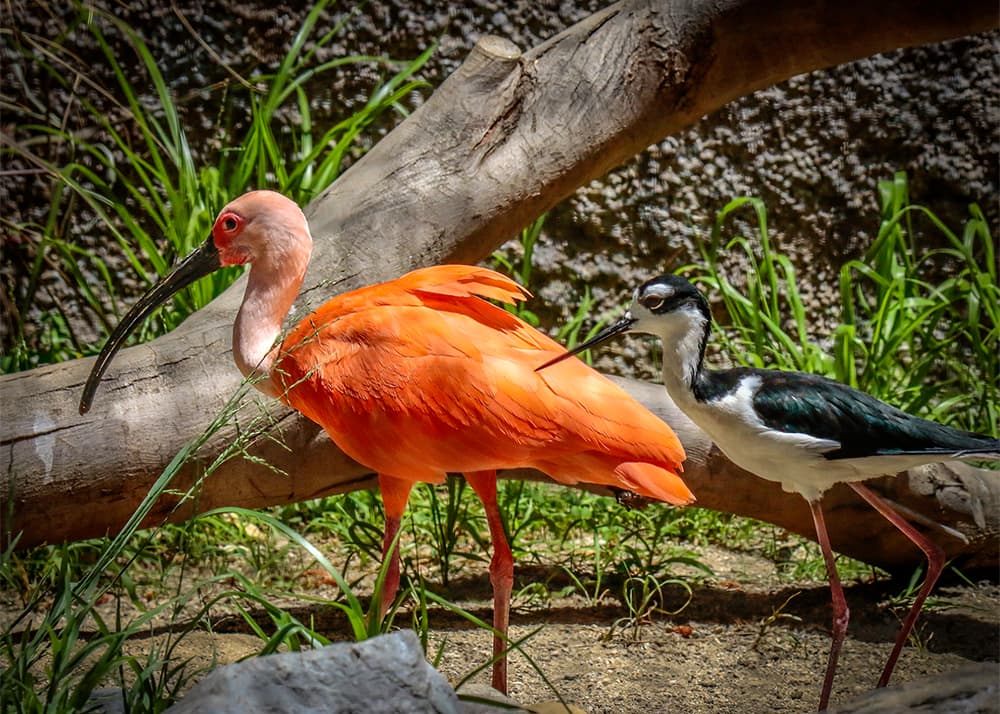 The black-necked stilts share a habitat with the sacred ibis. Photo by Michael Elliott

A male blue-faced honeyeater (Entomyzon cyanotis) arrived from Sedgewick County Zoo. Blue-faced honeyeaters are native to northern and eastern Australia as well as southern New Guinea. About the size of American robins (Turdus migratorius), they live in pairs or small groups and are locally also known as banana birds due to their fondness for the flowers and fruits of banana plants. 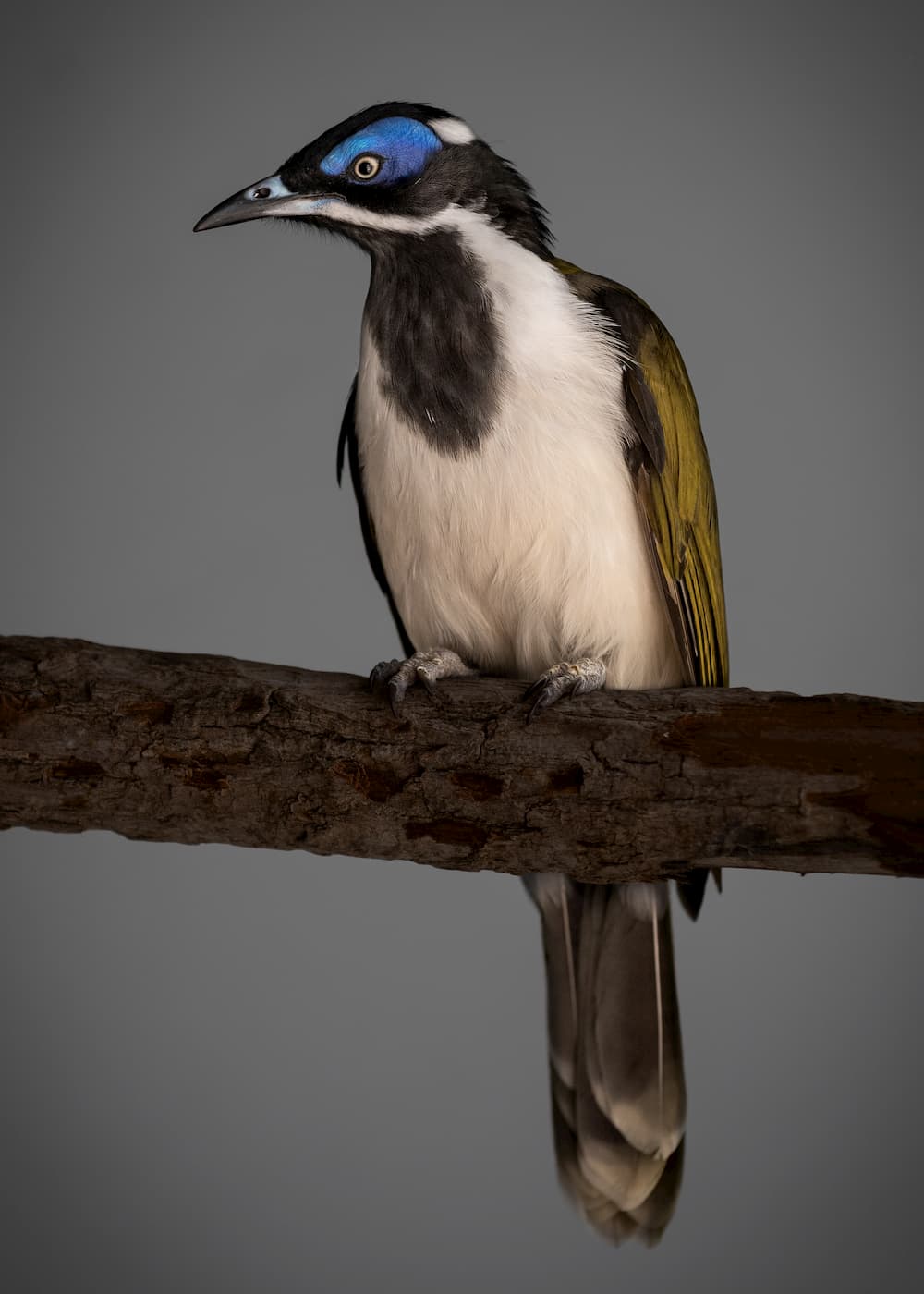 The blue-faced honeyeaters reside behind the scenes in the Zoo's Avian Conservation Center. Photo by Jamie Pham 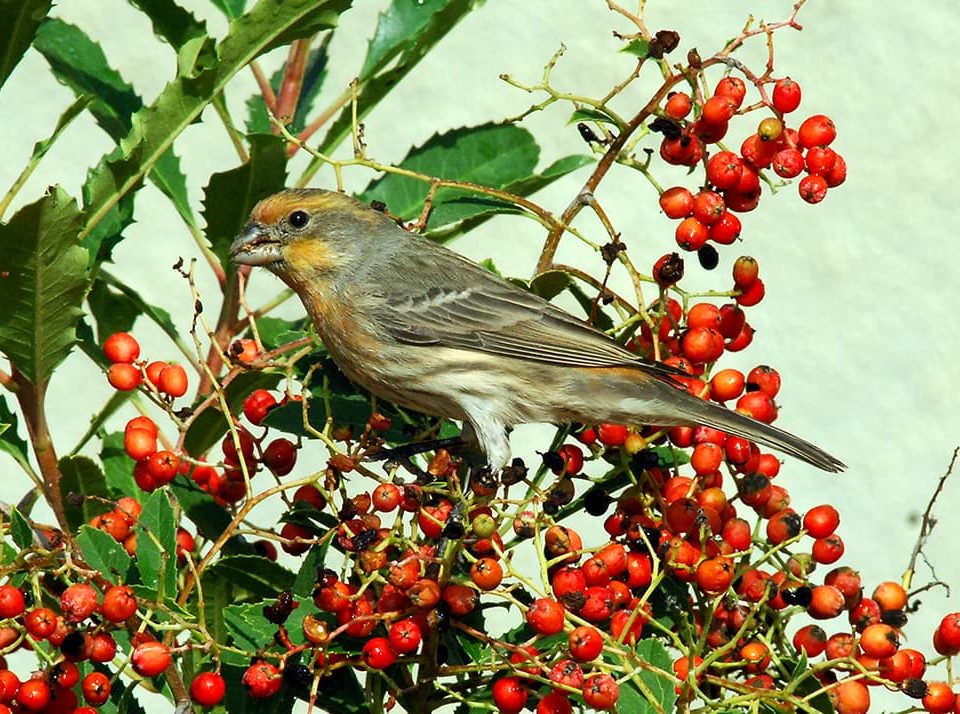 Toyon, also known as California holly, is an easy to grow native plant that produces a bounty of berries that attract wild birds, including housefinches. Photo by Tad Motoyama 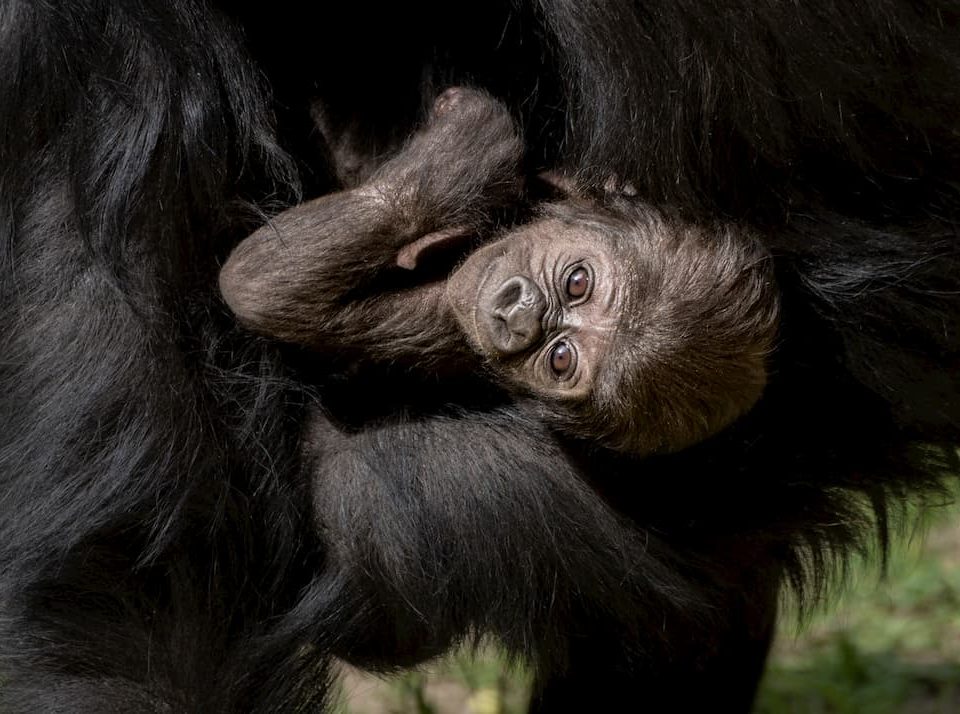 Angela's developmental milestones were bright spots for Zoo staff, volunteers, and guests throughout the year. Photo by Jamie Pham