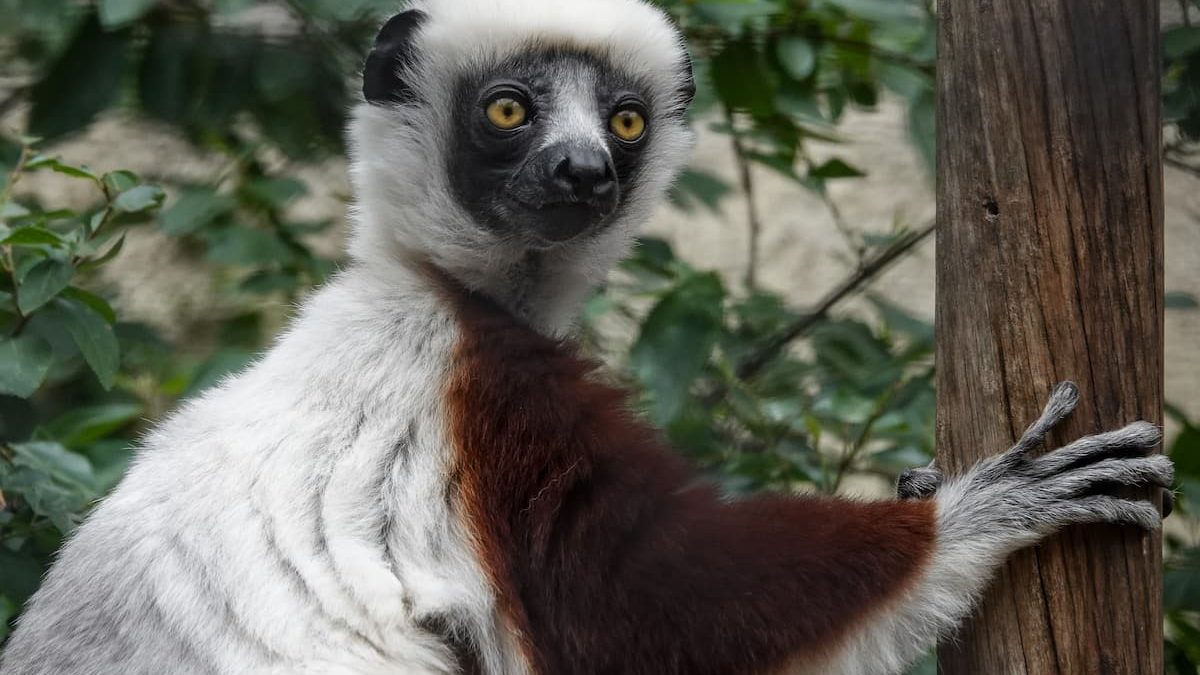 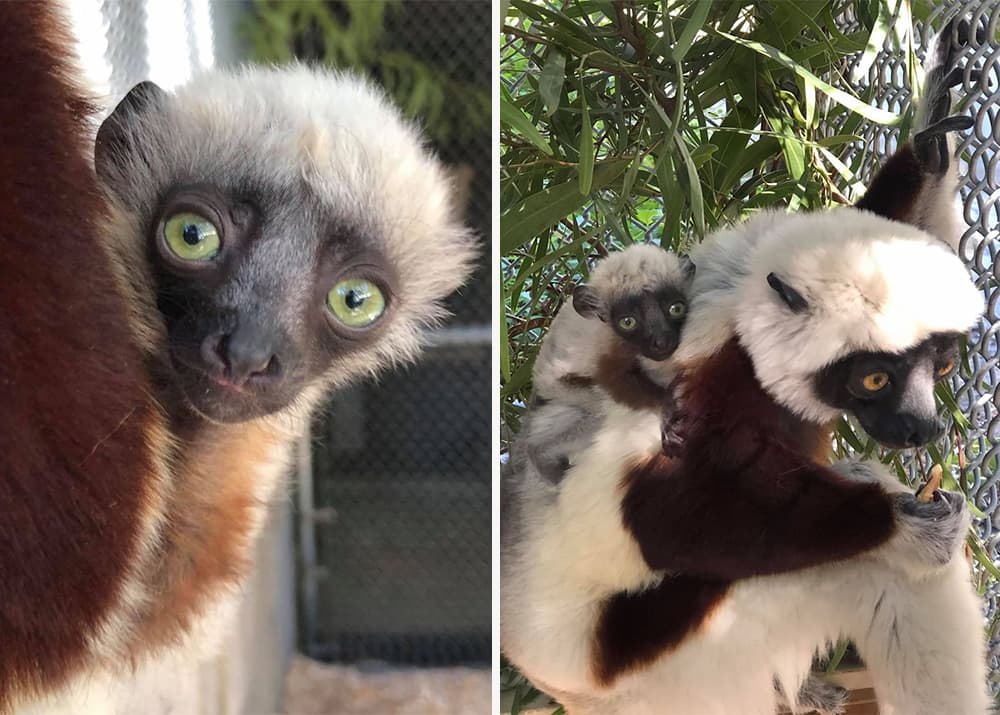 Spring has sprung and among the early babies that have arrived is a male Coquerel's sifaka was born on January 11. This endangered species can be found in the tropical dry lowland forest of northern Madagascar. Sifakas are exceptional clingers and leapers—they crouch with their long tails curled behind them, then use their powerful legs to launch themselves up to 30 feet from branch to branch. Because of our compatible climate, year-round browse availability, and staff expertise, L.A. Zoo was the first North American zoo to provide a home to a breeding pair from the prestigious Duke Lemur Center in North Carolina, and we have done extremely well with them. Currently, the Zoo is home to a pair of blue-eyed black lemurs, five ring-tailed lemurs, and five Coquerel's sifakas.

A female yellow-backed duiker was born on January 30. The yellow-backed duikers share a Zoo habitat with the bongos. “Duiker” comes from Afrikaans/Dutch and means “diver.” The name arose from these wary animals’ tendency to dive into undergrowth at the slightest sign of danger. As with so many species, they are threatened by habitat loss and the bushmeat trade. In addition to yellow-backed duikers, the Zoo works with black and red-flanked duikers. In the wild, these forest antelopes are fairly solitary and rarely gather in groups greater than three. 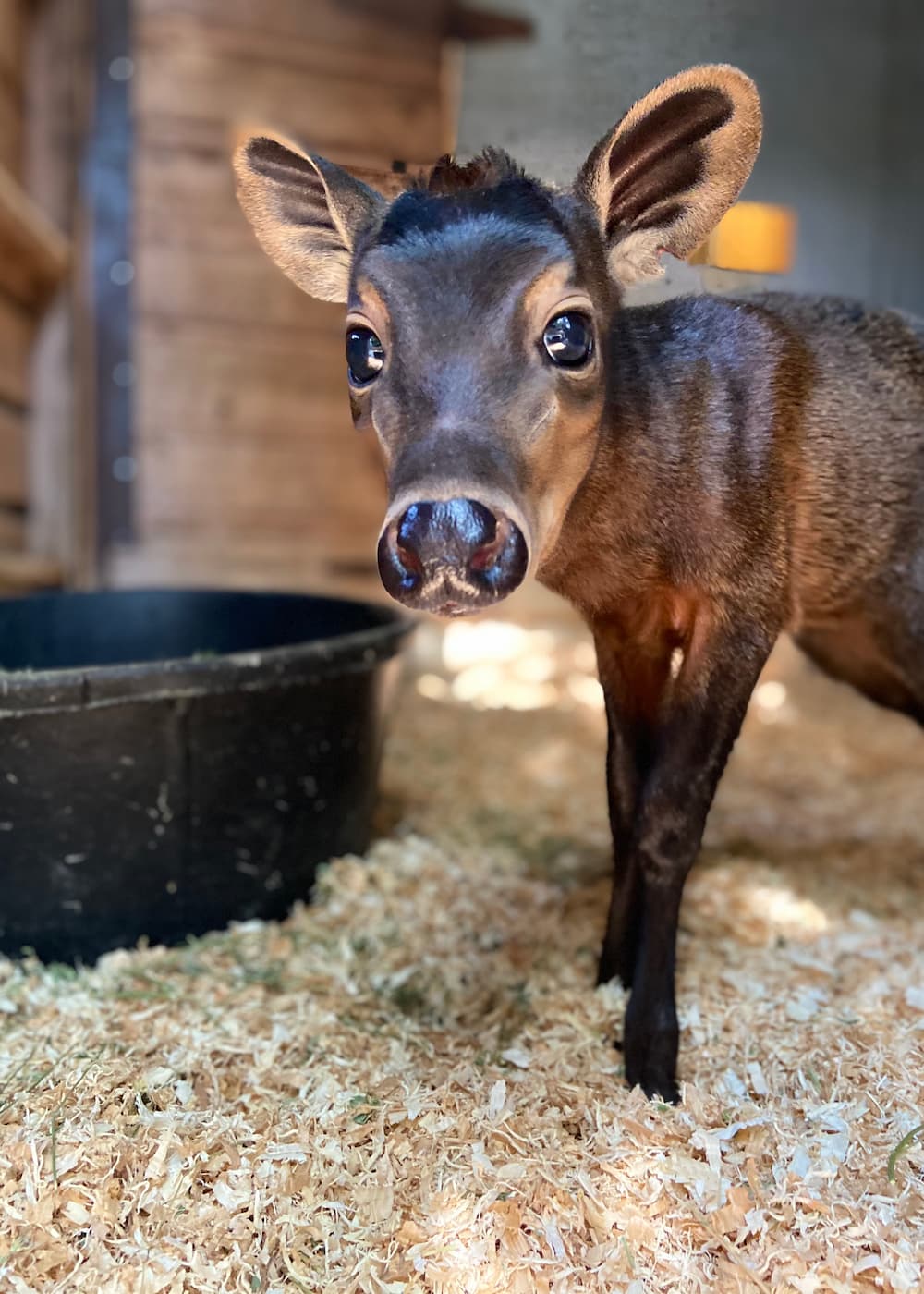 Yellow-backed duikers share a Zoo habitat with the bongos. Photo by Robin Noll

The double-wattled cassowary (Casuarius casuarius) pair have been reintroduced for breeding season; under normal circumstances these birds are solitary. Last year they produced eggs that did not develop, which is common for a new pair. 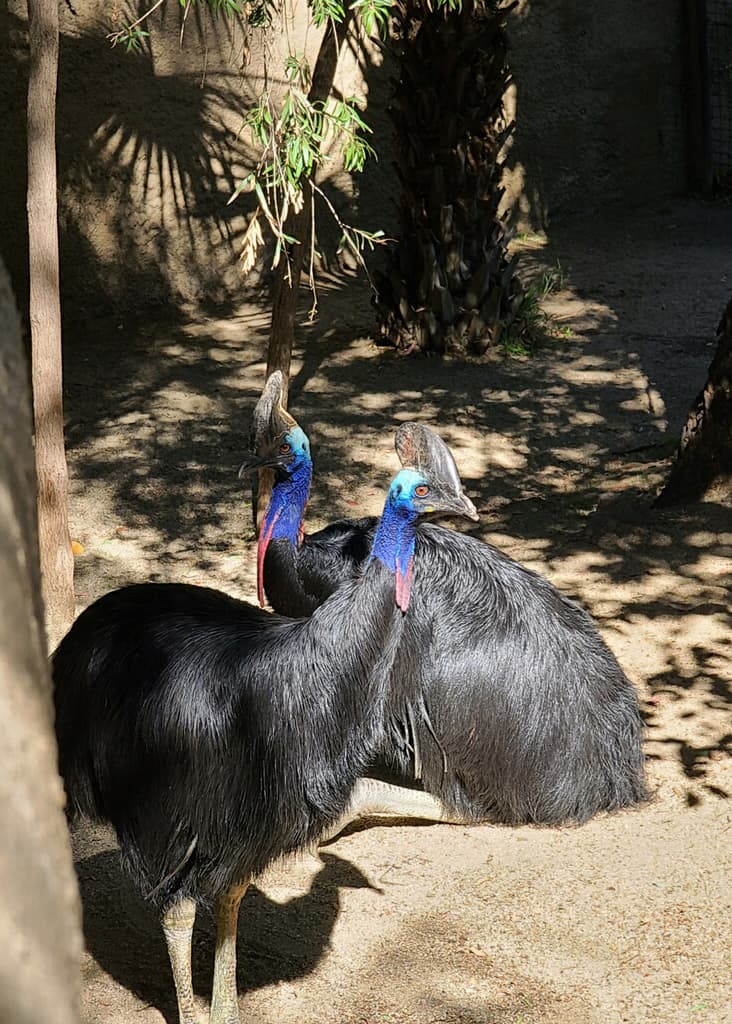 Cassowaries tolerate company only during breeding season and while the male incubates and raises the chicks. Photo by Leslie Rangel

The spectacled owl (Pulsatrix perspicillata) chick that hatched in December fledged on February 4. After fledging, spectacled owlets may remain with the parents for up to a year. 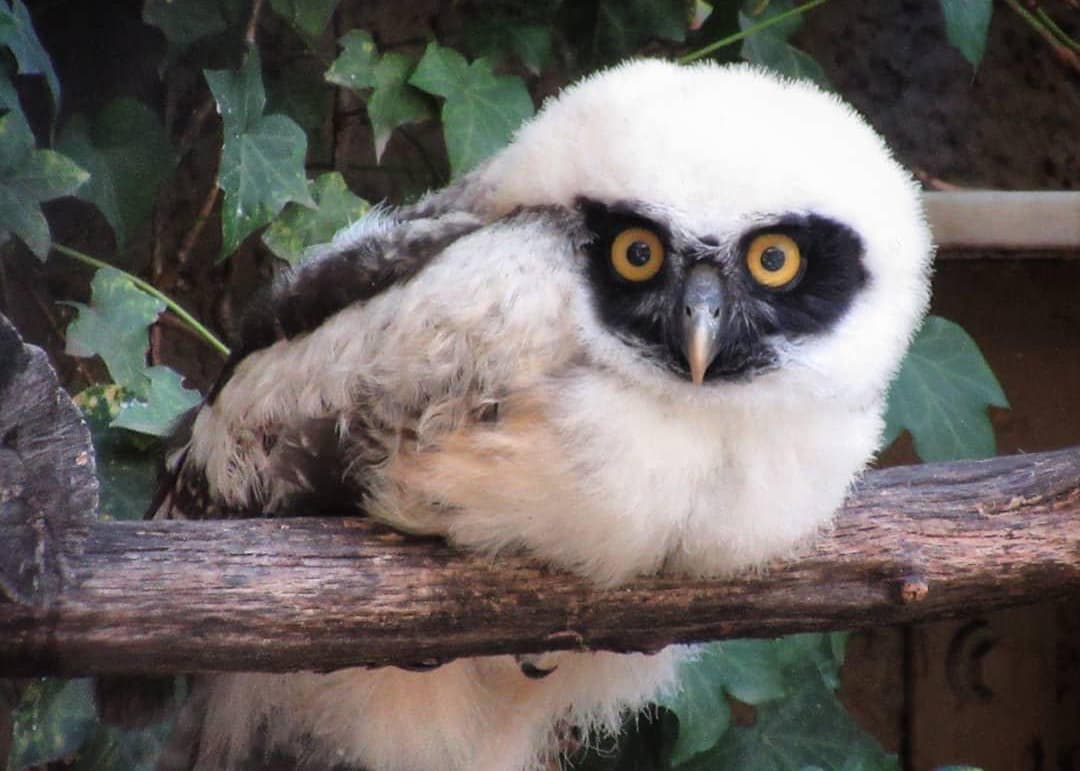 Spectacled owls are native to the South American countries of Argentina, Brazil as well as Central America. Photo by Valerie Jarrion

The circle of life can be difficult sometimes. So far, nine California condor eggs have been laid, which is a good start to the 2021 breeding season. But there have also been losses—a wild male California condor who had been under treatment for burns he sustained in the Dolan fire passed away despite tremendous efforts from the Zoo's veterinary staff. A second wild male condor lost his battle with lead toxicity. Poisoning from lead shot continues to be a major challenge in the recovery of this species. But a successfully treated young male condor was returned to USFWS on January 12 to be released to the wild.

The two wild California condor chicks who were brought to the Zoo in the wake of last fall's Central Coast wildfires are doing well. Iniko has fully recovered from the limp she had at the time she was brought to the Zoo, and Eva responded well to several rounds of chelation treatment to remove lead from her system plus some physical therapy. Both birds have settled into the pre-release flight pen with other chicks that are due to be released into the wild later this year, including Cal, who was recently named through our crowd-sourced “Miracle Condor Chick” fundraising campaign. 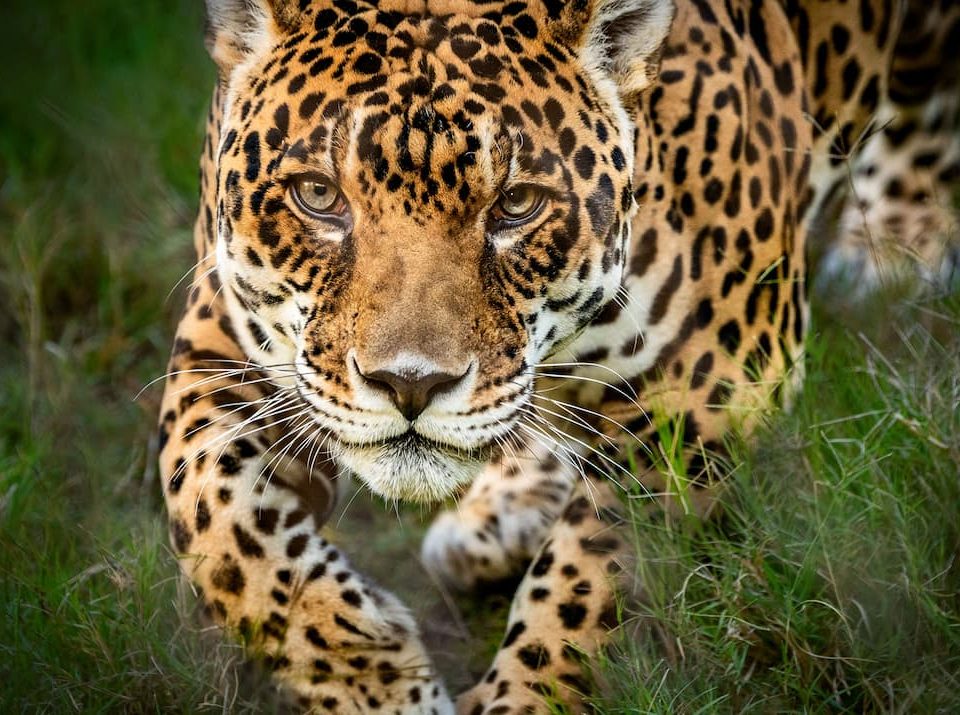 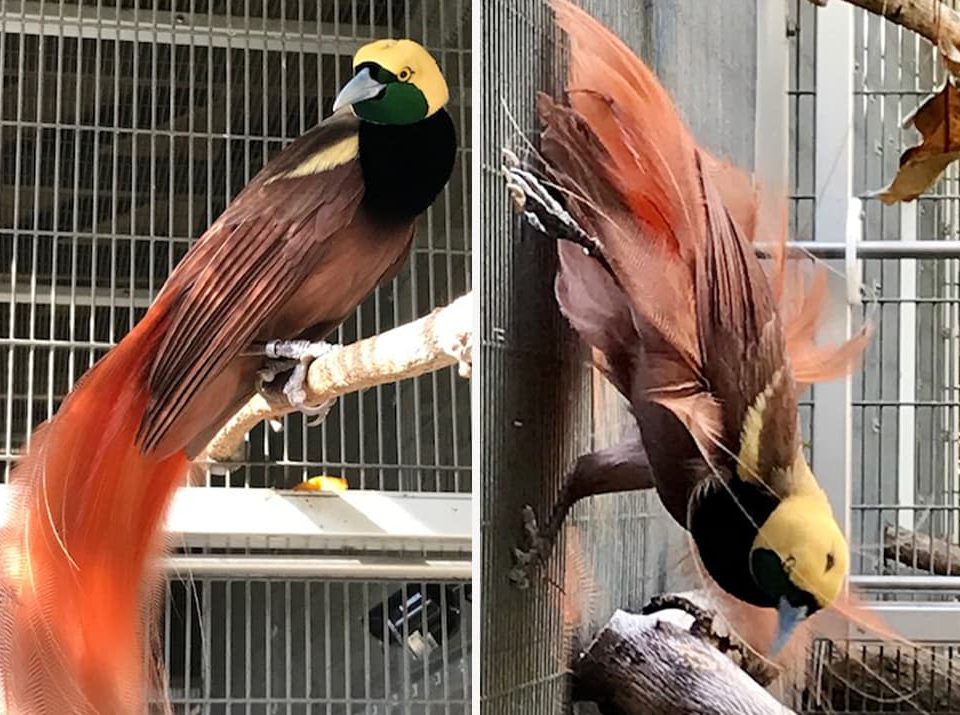