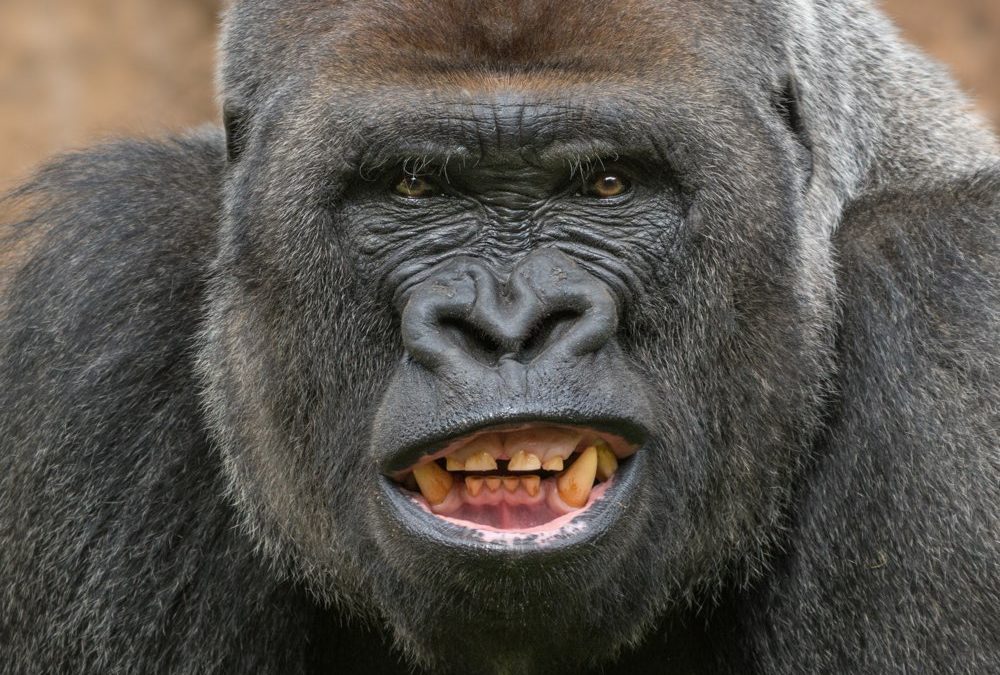 People always seem fascinated by what they do not possess. Case in point: fangs. Although human canine teeth (also called eye teeth because of their position under the eyes) are more pronounced than their neighboring incisors and premolars, they don’t really measure up when compared with other animals'.

All primates except humans have prominent canine teeth that are used to communicate aggression or for practical applications, such as opening tough nuts. Biologists are still uncertain why we lost our fangs. One prevailing theory is the advent of cooking changed our dentition because it reduced the need for massive teeth. Another explanation is that the development of human speech enabled us to express aggression by using angry words rather than baring scary teeth. Uakaris use their strong teeth and jaws to open tough nuts and thick-skinned fruits. Photo by Tad Motoyama Male mandrills have larger canine teeth than females and, as intimidating as their fangs may appear, showing them can be a friendly gesture. Photo by Charlie Morey

When you think of fangs, the first animals that probably come to mind are snakes, which have some of the most specialized teeth in nature. Snake fangs are basically hypodermic needles that inject venom into prey animals, and there are three main types of snake fangs.

In some venomous species, the fangs are located in the front of the mouth. All vipers, including rattlesnakes, Gaboon vipers, copperheads, cottonmouths, and Mangshan vipers (all of which can be found in the LAIR) are front-fanged, and these sophisticated teeth can be rotated independently and folded back into the mouth when not in use. This Santa Catalina Island rattleless rattlesnake is shifting its fangs, each of which can be moved independently. Photo by Charlie Morey Gaboon vipers have the longest fangs in the snake world—up to four inches in length. Photo by Charlie Morey

Fixed front-fanged snakes such as cobras and mambas (also on view in the LAIR) have small, non-movable fangs at the front of the mouth. Some cobra species’ fangs are versatile: they can be used to inject venom or to spray it. In still other venomous snake species (such as hognose snakes and mangrove snakes), the fangs are located in the rear of the mouth. Green mambas’ fangs are located in the front of their mouths, but they are fixed in place and do not fold. Photo by Charlie Morey By studying snake embryos, a researcher at the University of Leiden discovered that in early stages of development, all snakes have rear fangs. This suggests that all venomous snakes likely evolved from a common rear-fanged ancestor.

A clue to the earliest venomous snakes can be found in the world’s only venomous lizards. Beaded lizards and Gila monsters are venomous, but they don’t have the sophisticated venom delivery system of snakes. Their venom glands secrete the toxins by way of grooved fangs in the back of their mouths, and they envenomate their prey by biting and using a chewing motion to work the venom in. Beaded lizards (like this baby, one of many hatched at the Zoo) and Gila monsters are the world’s only venomous lizards. Grooved fangs in the back of their mouths channel venom. Photo by Ian Recchio

All true spiders are also venomous, and their fangs, like those of venomous snakes, have evolved to inject venom into their prey. Since spiders most often prey on other arthropods—which all have a hard shell-like exoskeleton—scientists and engineers have been studying the form of spider fangs in hopes of discovering better ways of designing tools for piercing, and medical devices such as hypodermic needles. Tarantulas have long, needle-like fangs, but they rarely bite humans unless provoked or threatened. Photo by Jamie Pham Sun spiders are not true spiders and lack venom—though they do sport very impressive fangs. These arachnids are harmless and bite humans only when provoked. Photo by Sandy Masuo

Many other animals from big cats to fruit bats have impressive canines—but deer? It’s true! A surprising number of ungulates (hoofed animals) have fangs.

The next time you visit the Winnick Family Children’s Zoo, look closely at the male chevrotain, and you might just see his oversized canines. The name “chevrotain” comes from the French word for “goat,” and in Malaysia, these petite creatures are known as mouse-deer. They belong to the same order as such heavyweights as hippos, bison, and giraffes. Because they inhabit dense rainforests and mangrove thickets, antlers or horns would get tangled in vegetation, so the males grow fang-like tusks to impress females and spar with other males. The male chevrotain may be small, but he is armed with sharp fangs to spar with other males during mating season. Photo by Paul Bronstein

Other ungulates that live in dense forest habitats also have this toothsome adaptation. Tufted deer have been described as the “vampire of the deer world” because the males of this species (found in the high elevation forests of China, India, and Myanmar) sport long, sharp canine teeth as well as simple, spiked antlers. Reeves’s muntjac is a small, stocky deer native to Taiwan and central, south, and southeast China. Like the chevrotain, they generally inhabit dense woodland areas and rocky terrain with steep ravines where large, heavy antlers would be cumbersome. In addition to the long canine teeth, the males have short, spiky antlers. Reeves’s muntjac are also known as “barking deer” because the of sharp calls they use when alarmed or threatened. Sometimes a sharp call can be as useful as pointy horns. Reeves’s muntjac is one of many fanged forest deer of Asia. Photos by Tad Motoyama

Interestingly, although it is truly a pig, the babirusa is known as the “pig-deer” of Sulawesi. Like other pigs, males of this species grow tusks, but these are tusks unlike any other. The upper canine teeth start out growing in the usual downward-pointing position but as the boar matures, the tooth sockets rotate so that the tusks point upward, eventually emerging from the upper part of the animal’s snout. Eventually they curve around and form an arc that parallels the lower canines.